Two and one-half acres of land are seen to be underwater - while the area around it remains tinder-dry.
By Simona Kitanovska August 23, 2022
Facebook
Twitter
Linkedin
Email 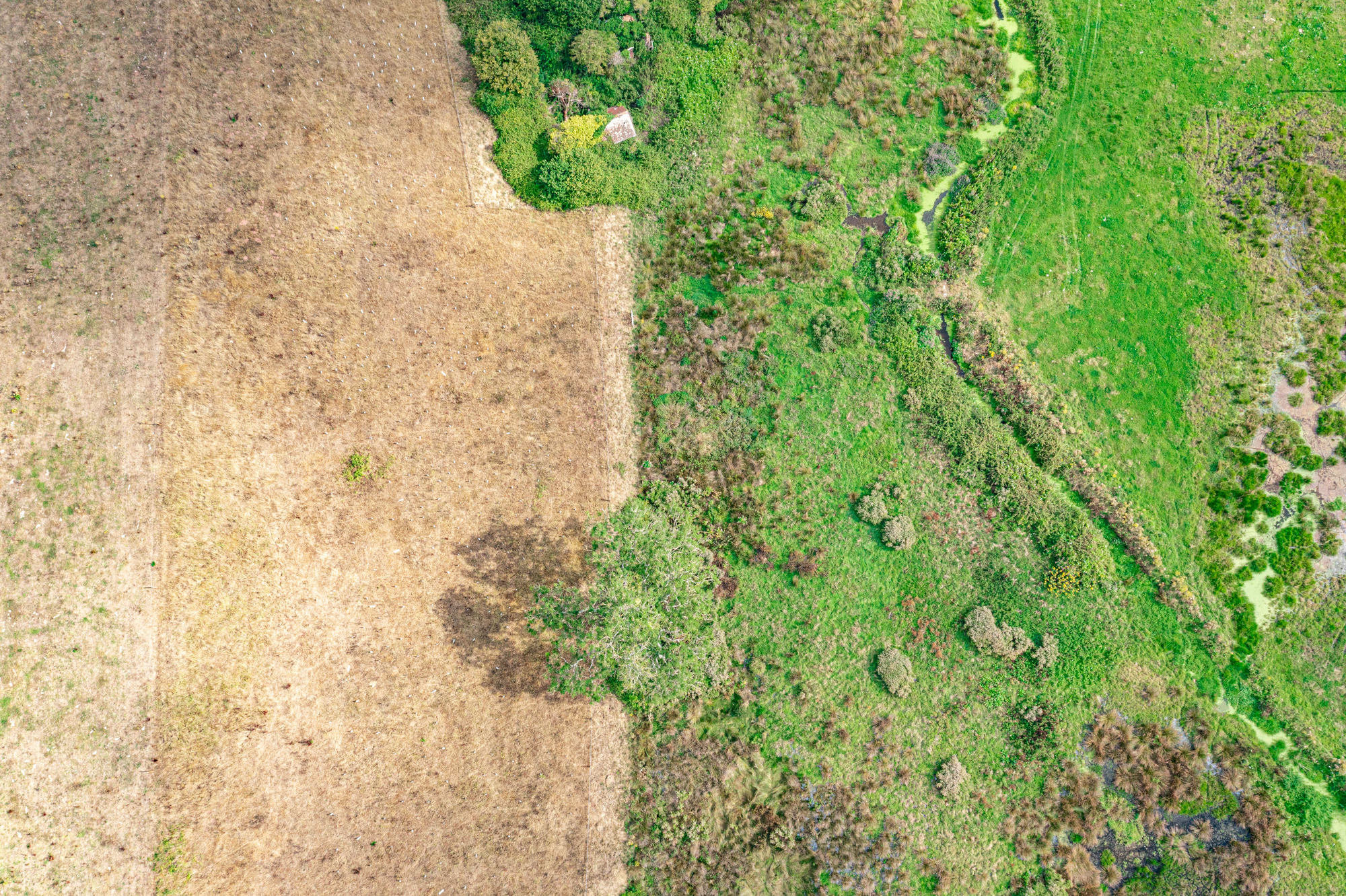 Remarkable drone picture shows how beavers have transformed parched countryside into a luscious wetland by building a complex network of dams, in Devon, in the U.K., in an undated photo. Aerial images captured by Clinton Devon Estates show how the colony have kept one area of land green despite the heatwave leaving the countryside scorched brown. (Matthew Newby, SWNS/Zenger)

Remarkable drone pictures show how beavers have transformed brown, desiccated countryside into a luscious wetland by building a complex network of dams.

Aerial images of the beavers’ activities were captured by Clinton Devon Estates, a land management company that manages the estate of Gerard Neville Mark Fane-Trefusis, the twenty-second Baron Clinton.

The images show how the colony have kept one area of land green despite the heatwave leaving the countryside scorched brown.

Two and one-half acres of land are seen to be underwater – while the area around it remains tinder-dry.

The beavers used sticks and mud to create dams, which are now holding back large volumes of water that have prevented the area from drying out.

The animals were part of a trial ending in 2020 which explored the impacts they had on the British countryside.

It concluded that they can bring benefits to people and wildlife through flood alleviation and their ability to “clean” water supplies.

They were also found to help boost numbers of fish and amphibians. As a result, it was agreed the beavers could stay in the area.

The birds-eye-view images of the East Devon dam network are the latest evidence of how the enterprising mammals could help in the fight against climate change.

East Devon Pebblebed Heaths Ranger Ed Lagdon said: “It’s quite incredible to see this area, when the conditions have been so challenging in recent weeks.

“Beavers are very territorial and as the Lower Otter is near full capacity, beaver families will explore nearby tributaries and culverts to find small areas of wetland to settle.

“They feel safe in water, so will seek a water source and that’s likely to be why this family chose this particular area.

“It’s when they come away from the river in this way that they can have more of an impact on their surroundings – they will change the environment around them and manipulate the conditions to suit them.

“In this location the beavers have used sticks and mud to create several dams which are now holding back large volumes of water.

“The water is up to two feet in some areas and is fantastic for wildlife such as birds and invertebrates. It also brings flood prevention benefits and carbon capture within the wetland.”

Clinton Devon Estates’ Head of Agriculture, Sam Briant-Evans, explained that the result is they have two hectares of the field as a grazing platform for their cattle.

Although it’s great for the land to have the beavers keeping it wet, it has created a “conundrum” for the Estate.

“We need to accept that the beavers are there but they need to be closely monitored and managed going forward, so their activities and any potential flood issues can be monitored and we can tackle it quickly.

“There’s no clear solution. However, what this does highlight is that with the right management and by working with them, they can help in the adaptation to climate change,” said the Clinton estate spokesmen.

From October 1, new government legislation will see beavers given legal protection as a recognized native species in England, meaning it will be illegal to disturb, harm or kill them.

John Varley, Clinton Devon Estates Director, said: “In the right place, beavers can bring about major benefits for wildlife, the environment and society, including increased biodiversity.

“Clinton Devon Estates supported the River Otter Beaver Trial from the beginning because we wanted to understand the full impact of beavers in a real-world setting.

“During the project we learned a great deal about these benefits, such as cleaner water, natural flood management and habitat creation.

“However, we have also witnessed negative impacts when beavers are in the wrong place: farmers’ fields, private property and roads flooded, as well as trees damaged.

“As the beaver population on the River Otter grew and expanded, so did the need for proactive management, and all the costs associated with that.”

He concluded: “We believe that if properly funded by government, the cost of managing beavers is far outweighed by the social and economic benefits to nature and the public.”