The mementos included a black-and-white photograph, newspapers, and a poignant card from the previous owners.
By Simona Kitanovska August 23, 2022
Facebook
Twitter
Linkedin
Email 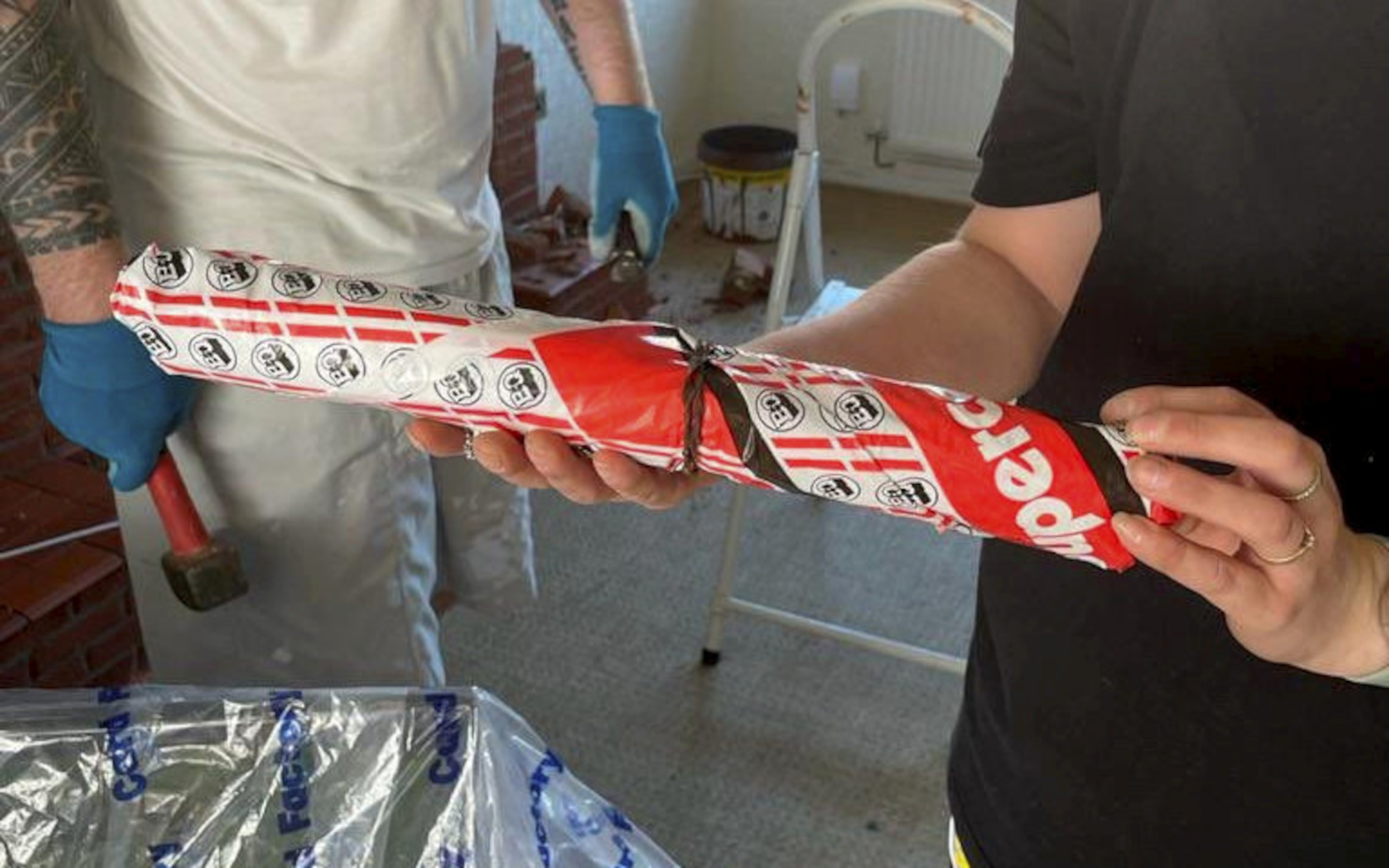 The 1960's capsule discovered in a home in Birmingham, in the U.K., pictured in an undated photo. Scott Bevan and sister Deborah Phillips were left stunned after discovering a heartwarming time capsule from 1969 stashed away behind a fireplace while they renovated their new home. (Matthew Newby, SWNS/Zenger)

A family were left stunned after discovering a heartwarming time capsule from 1969 stashed away behind a fireplace during renovations on their new house.

Scott Bevan, 42, found the sentimental items tucked away in the walls after his 51-year-old sister, Deborah Phillips, moved into a property in Birmingham, England, in the United Kingdom, earlier this month.

The mementos included a black-and-white photograph, newspapers, and a poignant card from the previous owners wishing her “luck and happiness” in her new home.

Bevan made the remarkable discovery after he removed the fireplace and found a mystery package concealed in the wall cavity wrapped up in a plastic bag.

It contained old Birmingham Evening Mail newspapers from 1969 and 1988 as well as a black and white photograph of the previous homeowner Ethel Wright.

And 15 minutes later Bevan discovered a second capsule in a column on the other side of the fireplace from 1988 which included the touching note.

It read: “To whom it may concern. We wish you lots of happiness and good luck in your new home.

“We came here end of May 1967, it was then newly built and we have found contentment and security in these four walls.

“We hope you enjoy the house and garden as we have.

“The original fireplace was built in 1969, and this one in August 1988, but I suppose when you arrive you will want to make major alterations so presumably you will find this note.

“Good luck to you, regards, Ethel and Harold Wright.”

Bevan, a metal detectorist from Castle Vale, Birmingham, said: “I just think it’s a selfless and lovely thing to do and that is what is missing from the world at the minute – thinking about others.

“Debbie bought the house about two weeks ago – but it had been empty for four years before she moved in, so it needed a fair bit of work.

“I absolutely love discovering things that have been lost or conserved.

“So as I removed the bricks from the fireplace, I saw some loose ones, and underneath a cavity filled with a plastic bag covered in debris – I had a feeling it was going to be a good find.

“Once I pulled it out I realized it had something inside it of great sentimental worth, and jokingly said to my sister, ‘I wonder if there’s another one on the other side.

“The couple must have reburied the first capsule from the 60’s in one column and they added another capsule in 1988.

“The card – which had some lovely words that made my sister quite emotional.”

Below the message was another dedication from their sons, Paul and Martin – “and their respective wives and sweethearts, Jenny and Beverley xxxxx”.

Bevan said the words had particularly moved his sister after she had endured a tough time over the past few years.

After suffering a brain aneurysm a couple of years ago, Phillips moved into the property to be closer to family.

Bevan added: “She is really hoping this move – which is where our mom, sister and brother live too – will begin a new and better chapter in her life.

“Hopefully Debbie does find that happiness, contentment and security that the previous owners found through the house too.”

The first newspaper is dated April 1969, two years after the family moved into their new-built house on Croy Drive, in Castle Vale, in England.

The front page news contains stories of protests over pay at the Longbridge factory, a hunger strike at Winson Green Prison and a coal pit blast in Mexico.

The second paper, from August 1988, offers a 12-page special on the upcoming Birmingham Super Prix.

The black-and-white photo shows a portrait of Wright, smartly dressed in a hat, suit and tie.

Bevan added: “It’s kind of funny that the couple knew the fireplace would be the first thing to go.

“It was a typical 1980s fireplace. I didn’t really like knocking it down to begin with to be honest, I’m quite sentimental like that.

“I think it was an amazing thing that this wonderful couple had the foresight to do – it meant everything to Debbie and it was an honor to have been the one to find them.

“I said to my sister maybe she should do the same thing to leave her mark.”

Bevan originally shared the photos on Twitter and admitted he was very surprised at how his post went viral.

He added: “I couldn’t keep up with all the comments.

“I think there is a lot of bad news at the moment, and such a selfless act makes people smile – and it’s what we all need at the moment.”

Wright’s photo will now be handed back to her son Paul who told Bevan he had no idea the time capsules were even in the house.