Hope Louise, co-founded 'The Pevensey Plungers' which brings people together every morning on the shore of the English Channel.
By Simona Kitanovska August 23, 2022
Facebook
Twitter
Linkedin
Email 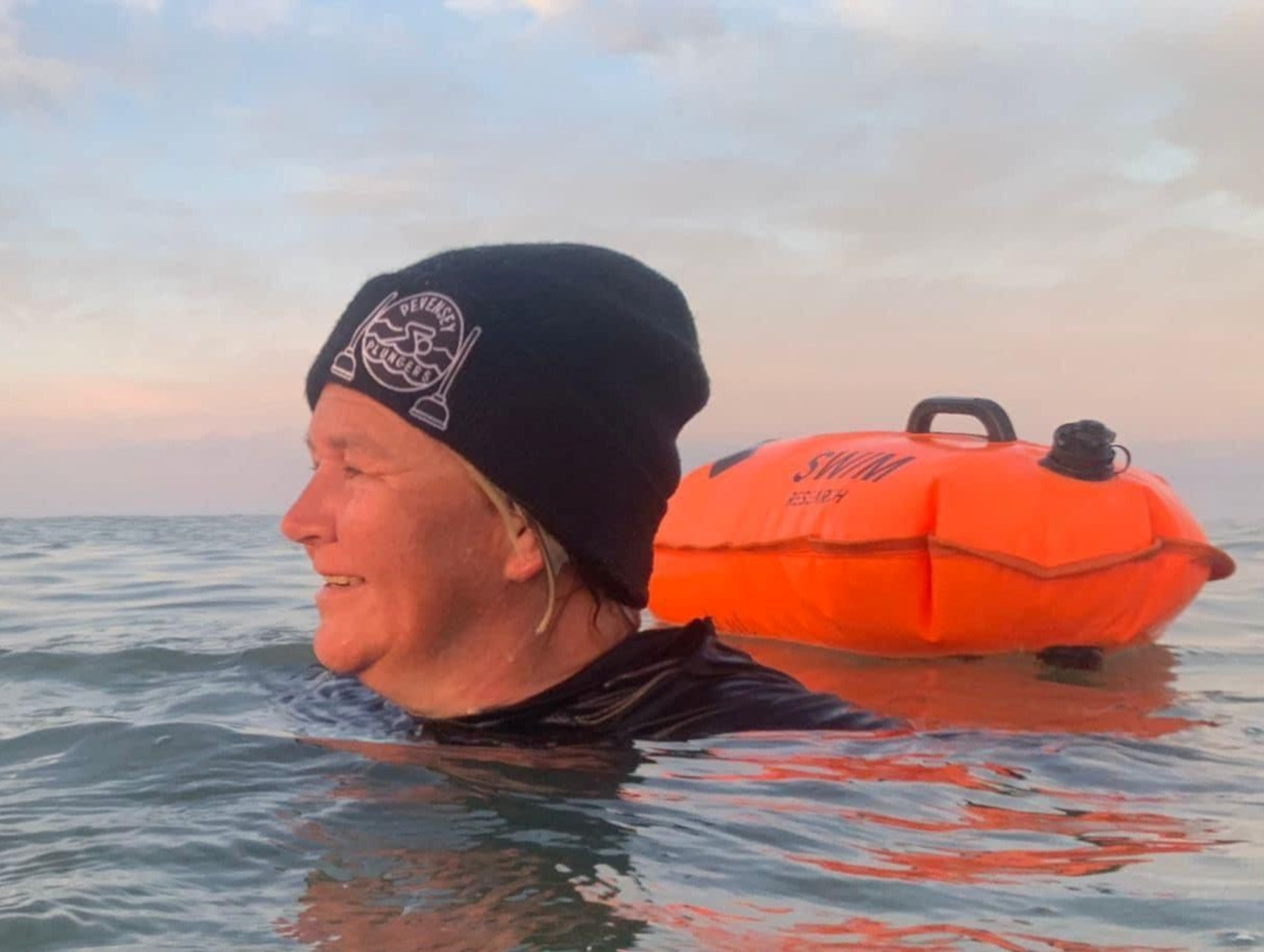 Hope Louise poses in an undated photo. Louise, who is a brain tumor patient has inspired dozens of people to join her for a daily swim in the English Channel. (Brain Tumour Research,SWNS/Zenger)

A brain tumor patient has inspired dozens of people to join her for a daily swim – in the sea.

Hope Louise, 47, co-founded ‘The Pevensey Plungers’ which brings people together every morning on the shore of the English Channel.

It aims to help them experience the therapeutic benefits of cold-water immersion.

The mother-of-two’s group has developed a large following with more than 200 people attending its monthly full moon plunges on the south shore of England.

Hope, of Pevensey, East Sussex, located in the United Kingdom, is now using her daily swim as part of the Brain Tumor Research charity’s Swim Challenge in August to help find a cure for the disease.

After deciding to swim 10 kilometers — 6.2 miles — throughout the month, she decided to turn her morning Pevensey Bay plunge into a daily swim to one of the bay’s 500-meter (0.3-mile) marker buoys, a challenge that has gained in popularity and now involves others from her group.

Hope, a veteran manager with 22 years of experience with the J D Wetherspoon chain of pubs, was diagnosed with a meningioma in June 2012 after suffering from double vision, tiredness, headaches and pain in her eyes.

A month later she underwent a 12-hour surgery to have the tumor removed and has been having regular check-ups ever since.

She remains stable but continues to suffer with double vision as a result of the nerves in her eyes being severed and with neuralgia as a result of a brain injury she sustained, which she finds cold water immersion relieves to some extent.

Hope, who is now aiming to raise at least 2,740 British pounds (the equivalent of $3,200), which would fund a day of research at Britain’s Brain Tumor Research Center of Excellence, said: “I saw the challenge and thought ‘right, I’m going to swim’.

”I’d only plunged before so thought I’d swim to the buoy every day I could and within a month I’d reach the 10 kilometers [6.2 miles] easily enough but I didn’t expect other people to join in, which has been lovely.

”No one goes out alone; it’s like having a whole other family.

”One lady baked cakes and made 45 pounds [$53] for me by selling them on the beach whilst another created a painting called ‘sea goddess’ and auctioned it off for 60 pounds [$70]. Everyone’s got involved and it’s really blown my mind.

She added: “I know so many people who haven’t been as lucky as me, many of whom were younger than I was.

”Brain tumors seem to get forgotten about more often than not but they’re so common and there are so many different types that we need to do more to understand them.

”I’m grateful I’m alive and know I wouldn’t be here today if it wasn’t for past research so I want to support future research and help to raise more awareness.”

Brain tumors kill more children and adults under the age of 40 than any other cancer yet, historically, just 1 percent of the national spend on cancer research has been allocated to this devastating disease.

Charlie Allsebrook, community development manager for Brain Tumor Research, said: “Our Swim Challenge in August is a virtual challenge that can be tailored to suit anyone’s ability.

”Participants have the option of choosing to swim 2.5 kilometers [1.2 miles], 5 kilometers [3.1 miles] or 10 kilometers [6.2 miles], or another distance that better suits them, taking to the open water, sticking to their local swimming pool, or doing a combination of both.

“Hope’s already done amazingly well with her challenge and with getting so many members of her community involved. We’re very grateful for her support and wish her and her friends well with their remaining swims.”