Massive Alien Moth Found In US For First Time

"Washington State entomologists are asking the public to report sightings of the atlas moth after one was recently discovered."
By Joseph Golder August 22, 2022
Facebook
Twitter
Linkedin
Email 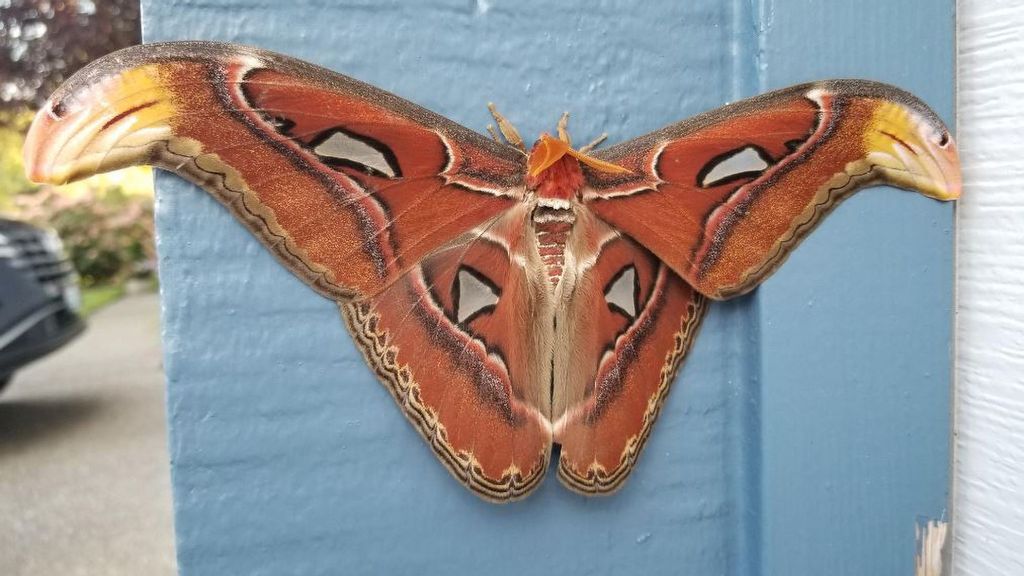 The atlas moth found on a garage in Bellvue, Washington, USA, undated. USDA’s Animal and Plant Health Investigation Service confirmed the specimen as an atlas moth on July 27, 2022. (WSDA/Zenger)

This massive moth with a 10-inch wingspan has been found in the United States for the first time.

The revelation was made by the Washington State Department of Agriculture – WSDA, which said in an updated August 17 statement obtained by Zenger News, that “Washington State entomologists are asking the public to report sightings of the atlas moth after one was recently discovered in Bellevue.”

Bellevue is a city in Washington state, located across Lake Washington from the city of Seattle.

The Washington State authority’s statement added: “There are no known traps for atlas moths, so WSDA is hoping to determine whether there are additional moths in the area based on public reports. With this single atlas moth detection only, there is no evidence that an atlas moth population is established in Washington.”

The statement asked locals to photograph, catch and report any of these colorful atlas moths they come across, adding that they pose no threat to the public.

WSDA entomologist Sven Spichiger said: “This is a ‘gee-whiz’ type of insect because it is so large.”

“Even if you aren’t on the lookout for insects, this is the type that people get their phones out and take a picture of – they are that striking,” Spichinger said.

The WSDA said that locals can send photos of any atlas moths they come across to [email protected] “for identification and include the location where it was spotted.”

“While there are no reports of atlas moth anywhere else in the U.S., if you believe you’ve found it outside of Washington State, please take a picture of it, note the location, and report it to the State Plant Regulatory Official or State Plant Health Director in your state,” the official statement said.

The state authority said that the moth had initially been reported by an unnamed University of Washington professor on July 7.

“WSDA entomologists identified it as an atlas moth and sent it to USDA for confirmation, which is the standard process for new pest detections. USDA’s Animal and Plant Health Investigation Service confirmed the specimen as an atlas moth on July 27 and it is believed to be the first confirmed detection of the moth in the United States,” the statement continued.

The WSDA said that it is illegal to keep the moths or to breed them.

“One of the world’s largest known moths with a wingspan of up to almost 10 inches, it is also a federally quarantined pest – meaning it is illegal to obtain, harbor, rear, or sell live moths whether adults, eggs, larvae, or pupae without a permit from USDA.

“USDA has more information about permits on its invertebrate pets web page. While there is minimal research about the moth, entomologists believe host plants may include apple and cherry,” the agency said.

“This is normally a tropical moth. We are not sure it could survive here,” Spichinger said.

“USDA is gathering available scientific and technical information about this moth and will provide response recommendations, but in the meantime, we hope residents will help us learn if this was a one-off escapee or whether there might indeed be a population in the area,” Spichinger added.

Atlas moths (Attacus atlas) are typically found in tropical climates. They can mainly be found in dry tropical forests and shrublands in Southeast Asia and in Borneo.

An Atlas moth was spotted in Ramsbottom, a rural town near Manchester in northern England in 2012, according to the BBC.

At atlas moth — Attacus atlas — belongs to the Saturniidae family, and should not be mistaken for native moths of the less colorful Rothschildia family.