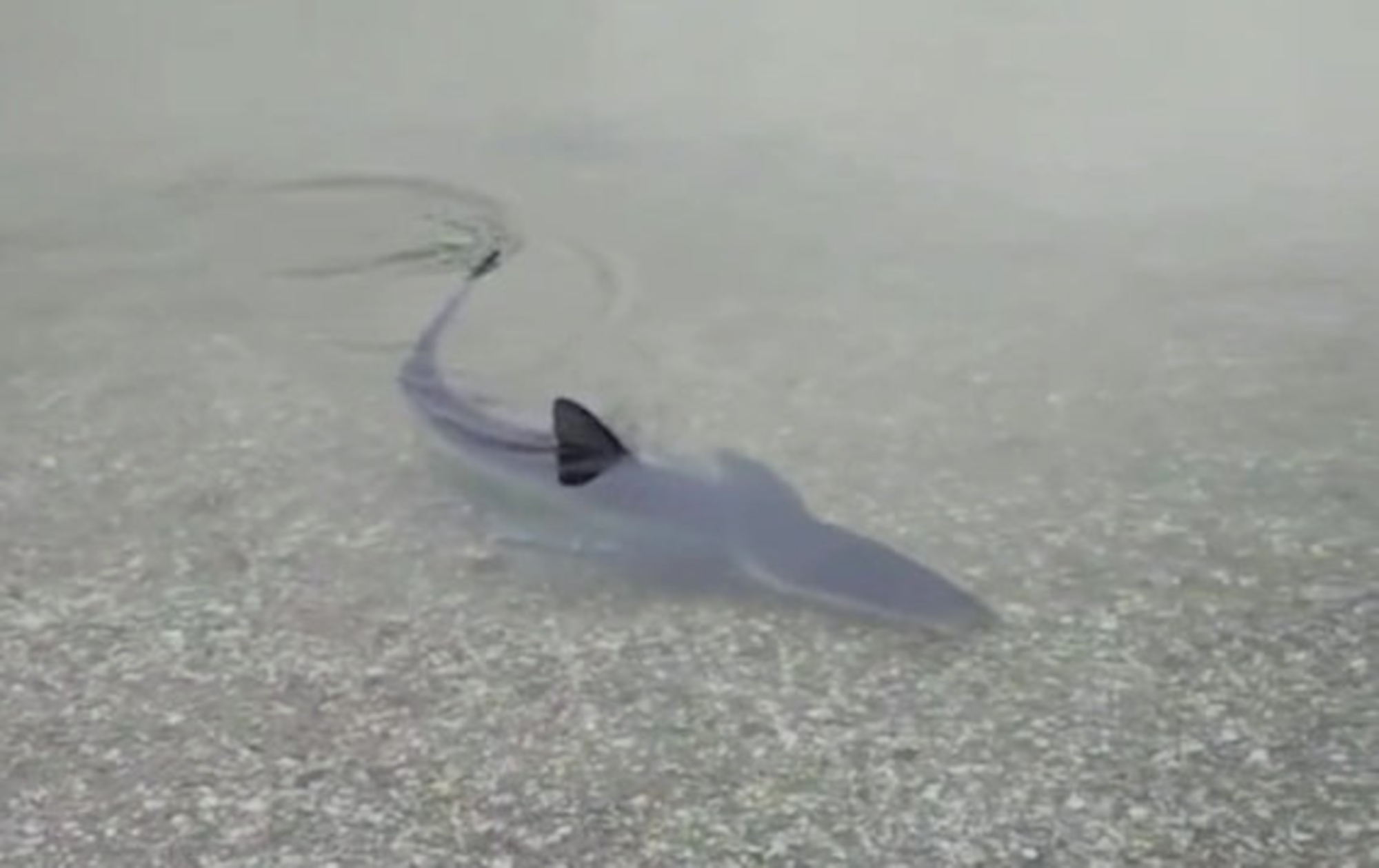 Locals walking along a river in Cornwall were stunned to spot this blue shark- the same species that recently bit a woman off the coast.The fish was seen in the estuary of the River Fal, in the U.K., on August 17, 2022. (Matthew Newby, SWNS/Zenger)

Locals walking along a river were stunned to spot this blue shark- the same species that recently bit a woman off the coast of Cornwall, in the south of England.

The toothy fish was seen in the estuary of the River Fal on August 17 and left people stunned.

Several people who were visiting Trelissick Gardens, near the village of Feock in southeastern England, in the United Kingdom, said they saw the shark.

On August 4, a woman diving off the coast of Cornwall was bitten by a blue shark – the first shark attack in the waters of Britain for 175 years. In 2018, a fisherman was snapped by a shark that he had hauled aboard his boat.

Harry Clark of Marine Vertebrate Ecology and Conservation recorded a video of the unexpected visitor along Carrick Roads, around Trelissick beach.

The University of Exeter graduate from Falmouth said he was unsure of why the shark was so close to the shoreline, but admitted: “It was very surprising to see this species this close to shore and in such shallow water as they are a pelagic species.”

Pelagic fish live in along coasts, open oceans, and lakes, but not usually at the bottom or shore.

One witness said: “Silently, slowly and elegantly this blue shark just sort of swam by.

“I thought he was in a bit of trouble, but he was fantastic. I was speaking to a fisherman down there and the fisherman was saying that, actually, he didn’t think he was in trouble.”

Dan Jarvis, of the charity British Divers Marine Life Rescue, reported concern over how close the shark appeared to the beach.

He said: “This is a real worry for us because they don’t normally come up so close to beaches like this.

“Our worry is that it is injured or unwell and might need some medical attention.

“Our advice is to ignore it and give it a wide berth. It could be disorientated and it’s best for our team to monitor it, to give it the space and time to do what it wants.

“It could have just come for a look and will swim off when it’s happy to, but if it’s unwell we don’t want to cause it any more stress by people getting into the water and interfering with it.”

Blue sharks are common in British waters from June to October.

They feed mainly on small fish and squid and, despite an incident earlier this summer which saw a blue shark bite a snorkeler during a ‘shark dive’ experience, they do not tend to attack humans.

The migratory blue shark is usually between ten and 13 feet long and can live up to 20 years.

Blue sharks bear the taxonomic name Prionace glauca, and belong to the Carcharhinidae family of sharks, which includes other migratory, live-bearing sharks of warm waters such as the tiger shark, bull shark, oceanic whitetip shark, and whitetip reef shark.