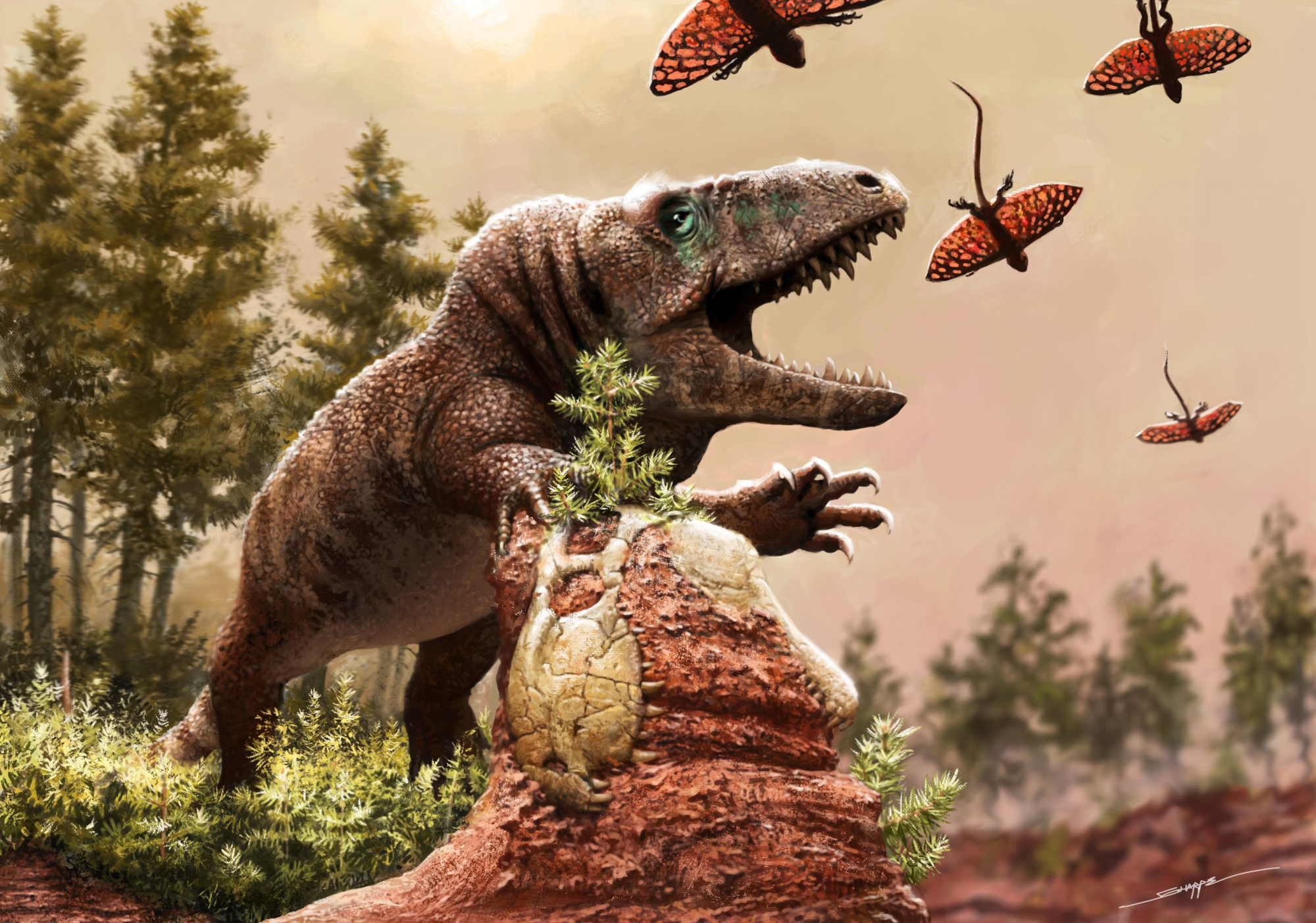 Global warming triggered the age of the dinosaurs, according to new research.

Rising temperatures caused ancient reptiles to diversify – leading to the biggest creatures that ever walked the Earth.

An analysis of more than 1,000 fossils found climate change kick-started their evolution – rather than mass extinctions.

The finding has implications for today. Animals have already started shape-shifting to cope with weather-linked stresses.

“Here we show rising temperatures during the Permian-Triassic led to the extinction of many animals, including many of the ancestors of mammals, but also sparked the explosive evolution of others, especially the reptiles that went on to dominate the Triassic period.”

Life almost came to an end 252 million years ago when at least 90 percent of all species were wiped out.

Massive volcanic eruptions heated the whole planet. The rate of carbon dioxide being released into the atmosphere now is about nine times more.

The U.S. team described it as “one heck of a coming out party” – for reptiles. They ranged
from primitive crocodiles with massive bone-crushing jaws to tiny cousins that took to the air.

Lead author Dr. Tiago Simoes, from the same lab, said: “We are suggesting we have two major factors at play – not just this open ecological opportunity that has always been thought by several scientists but also something that nobody had previously come up with.

“Climate change actually directly triggered the adaptive response of reptiles to help build this vast array of new body plans and the explosion of groups that we see in the Triassic.”

He added: “Basically, rising global temperatures triggered all these different morphological experiments – some that worked quite well and survived for millions of years up to this day, and some others that basically vanished a few million years later.”

The explosion led to a dizzying variety of abilities, body plans, and traits – firmly establishing both extinct lineages and those that still exist.

Reptiles date back more than 300 million years – making them one of the most successful vertebrates.

They colonized the land, sea and air. They include tiny lizards – and 60-foot ocean monsters called icthyosaurs.

They survived three major extinctions and are found on every continent, but Australia. There are over 10,000 species today, not counting birds – that descended from dinosaurs.

The study in Science Advances reveals for the first time how their bodies changed in response to millions of years of climate change.

Prof Pierce’s and colleagues tracked this back to rising global temperatures – years before any mass extinction events.

They identified vast anatomical alterations that took place in many groups – including the forerunners of crocodiles and dinosaurs.

It was in direct response to major climate shifts concentrated between 260 to 230 million years ago – shedding fresh light on how they cause organisms to evolve.

Recent research by the University of Sheffield found birds are adapting to global warming by developing bigger beaks – which help keep them cool.

Australian scientists revealed elephants and rabbits are coping – by turning into ‘Dumbo’ and ‘Bugs Bunny’. They are growing bigger ears.

Elephants use them as fans – while an extensive network of blood vessels contract in rabbits to cool them down.

It combined camerawork, CT scans and visits to over 50 different museums in more than 20 countries with global temperature data from millions of years ago.

State-of-the-art statistical techniques produced an ‘evolutionary time tree’. It reveals how early reptiles were related to each other, when their lineages first originated and how fast they were evolving.

The diagram showed diversification started about 30 million years before the Permian-Triassic extinction – making clear these changes weren’t triggered by it.

They were followed by rapid body changes in most reptile lineages. For instance, some of the larger cold-blooded animals evolved to become smaller so they could cool down easier.

Others evolved to live in water for that same effect. Some of the most bizarre went on to become extinct.

They included a giant, long-necked marine reptile once thought to be the Loch Ness monster, a tiny chameleon-like creature with a bird-like skull and beak and a gliding reptile resembling a gecko with wings.

There were also the ancestors of reptiles that still exist today – such as turtles and crocodiles.

Smaller reptiles, which gave rise to the first lizards and tuataras, went on a different path than their larger brethren.

Their evolutionary rates slowed down and stabilized in response to global warming. They were already better adapted.

They can more easily release heat from their bodies compared to larger reptiles when temperatures got hot very quickly all-around Earth.

The researchers are now planning to investigate the impact of environmental catastrophes on evolution of organisms with abundant modern diversity, such as the major groups of lizards and snakes.

Earth’s sixth mass extinction has already begun, with animals dying out at an alarming rate because of manmade climate change and habitat incursions.