Jankowski had to take several PCR tests, disinfect her bag and endured several temperature checks before she was allowed through.
By Simona Kitanovska August 22, 2022
Facebook
Twitter
Linkedin
Email 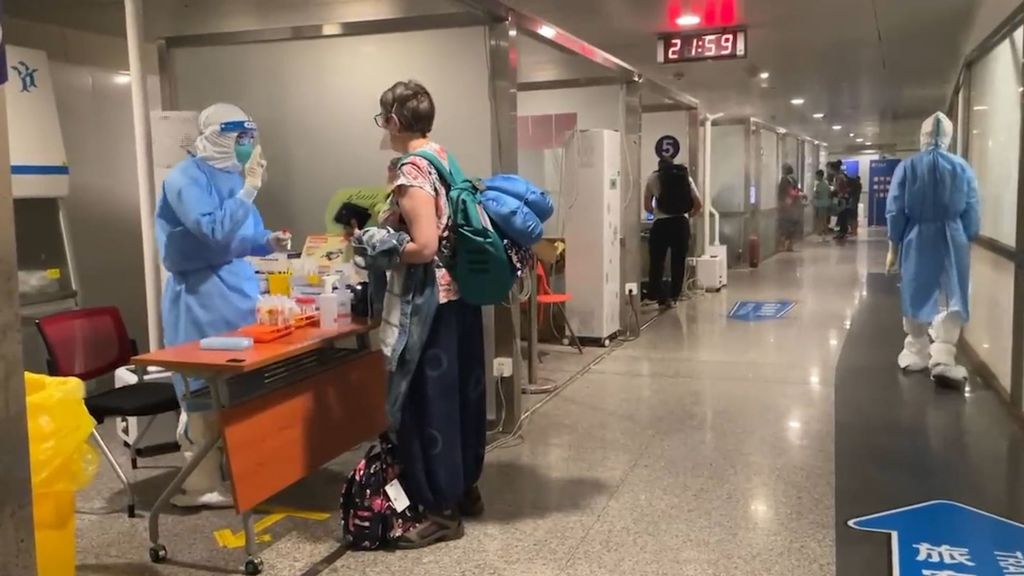 Passengers taking PCR Tests before walking through to the next part of the terminal, undated photo. (Justine Jankowski, SWNS/Zenger).

A journalist traveling to China documented the scale of the country’s zero-COVID policy as she took five hours — just to get through the airport.

Justine Jankowski had to take several PCR tests, disinfect her bag and endured several temperature checks before she was allowed through.

China’s zero-COVID policy has seen major cities in the country put under strict lockdowns, despite public outcry and a tanking economy.

The videos show Justine and other passengers following the lengthy procedures required by the government to enter the country.

It first started when Justine’s plane landed and passengers on the flight had to depart the aircraft row by row, which took over an hour.

Jankowski then had to walk in single-file through the empty terminal and was asked to sign documents to confirm she would obey the zero-COVID rules.

After a first temperature check on a digital screen, Jankowski had to put her bag through a scanner-like machine to get it disinfected.

After this, all passengers had to have their temperature checked again- before walking through to the next part of the terminal – in a staggered fashion.

Passport control consisted of an anonymous voice call where they had to scan their own documents.

Passenger were then subjected to mandatory PCR tests, followed by customs, before they were able to board coaches to the isolation hotels.

To collect their luggage, the travelers had to go to a specific collection point “under guard” from hazmat-clad workers.

After six hours, Jankowski finally arrived at the hotel for ten days of quarantine, where her bags were disinfected again.

The protocol inside the hotel forced people to stay in their rooms and anyone leaving risked the loudspeaker warning going off.

Ten days later, Jankowski was finally free from quarantine before she had her personal documents examined one more time.

She said: “To be honest, we were all prepared to go through this experience.

“We all had friends who left China and came back, in the past, who told us about it.

“I’ve been living in China for over five years and experiencing this zero-COVID policy, so it didn’t feel like a surprise.

“We were just exhausted cause we landed around 7 p.m. and arrived at the hotel at 2 a.m.

“After a long flight, you just want to sleep. But I have to admit it feels surreal when you come back straight from Europe, where everyone got used to COVID.”

There was one silver lining. Jankowski revealed the quarantine period had actually been reduced from three weeks to 10 days, which was a “relief”.