Kiska, who is approximately 45 years old, has survived all of her tank mates and her five calves, activists claim.
By Simona Kitanovska August 19, 2022
Facebook
Twitter
Linkedin
Email 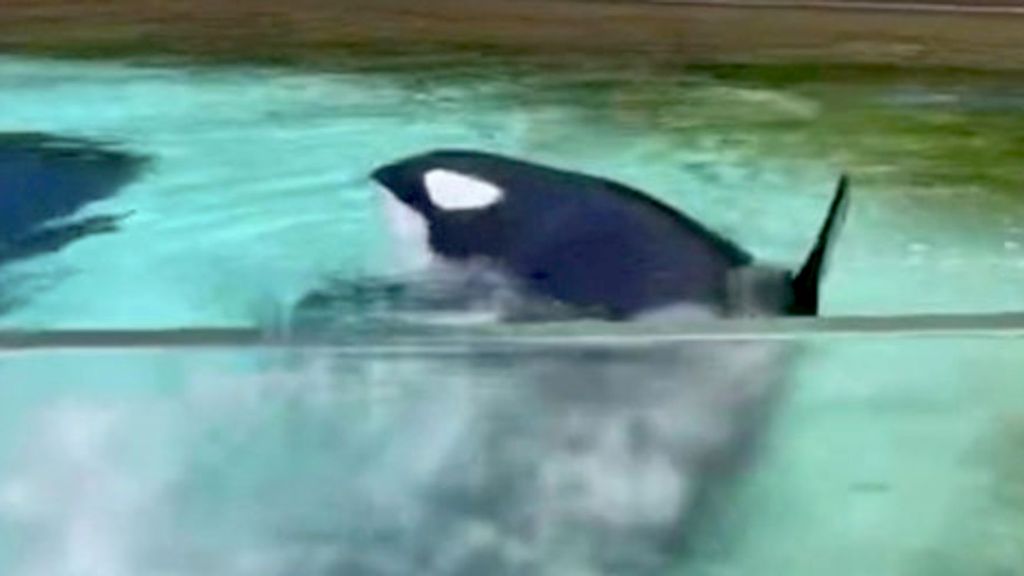 Video grab of Kiska the isolated orca circling the perimeter and trashing water over the tank walls with her body, in her tank at MarineLand Park in Niagra Falls, Canada, in June, 2022. Kiska has been dubbed the 'world's loneliest orca', after outliving its friends and offspring. (Matthew Newby, SWNS/Zenger)

This harrowing footage shows a lonely killer whale circling its tank and thrashing water after surviving its friends and offspring.

Kiska, dubbed the ‘world’s loneliest orca’, circled the perimeter and splashes water over the walls of her isolated tank at MarineLand Park in Niagra Falls, Ontario, Canada.

She is said to have been captured in Icelandic waters in 1979, and has been in captivity ever since.

Kiska, who is approximately 45 years old, has survived all of her tank mates and her five calves, activists claim.

Researchers and activists believe her behavior is a result of her damaged mental and physical health and well-being from prolonged captivity.

MarineLand has had 26 orcas pass through its tanks since it opened in 1962 – with 20 of them dying there – the rest were traded or given away to other establishments.

Despite being well known to be social animals that thrive in groups, Kiska remains isolated from any other animal, not even another orca.

“She was captured in 1979 in Icelandic waters and has been at MarineLand ever since.

“Her mental and physical health are deteriorating and as seen in the video, she repeatedly swims around her pool in the exact same way, even stopping briefly in some shallow water to shake erratically.

“Experts call it ‘zoochosis’. Orcas are social animals and need to be with their families, or in the least with others of their own species.

“For Kiska, her isolation is torture.

“Sadly, Kiska’s fate is largely sealed at MarineLand as she is their property, and as no viable seaside sanctuaries exist, her future is heartbreakingly bleak.”

Demers became a whistleblower and went to the media to expose what he claimed was wrongdoing by MarineLand a decade ago.

A walrus named Smooshi was the inspiration for his fight against the park and has dubbed his campaign ‘SaveSmooshi’.

Demers said: “I left MarineLand in 2012 because of ongoing issues that were grossly affecting the animals’ well-being and was being ignored for too long.

“I had to quit my job to force change, but it came at a price. MarineLand sued me in 2013 for $1.5M for plotting to steal a walrus. Our trial starts October 3. Finally.

“It’s no mistake MarineLand has made me jump through impossibly expensive legal hurdles throughout the last decade.

“Thankfully, with the support of the public who have largely covered my legal bills, I’m now in a position to force MarineLand into court.

“I’ve been and remain clear, if they want to walk away from the trial, they must release my walrus.

“I’m just here fighting for a happy ending. My mission only ends once Smooshi and I are reunited.

“Until then, I systematically and methodically continue to destroy MarineLand.

“There is no other plan.”