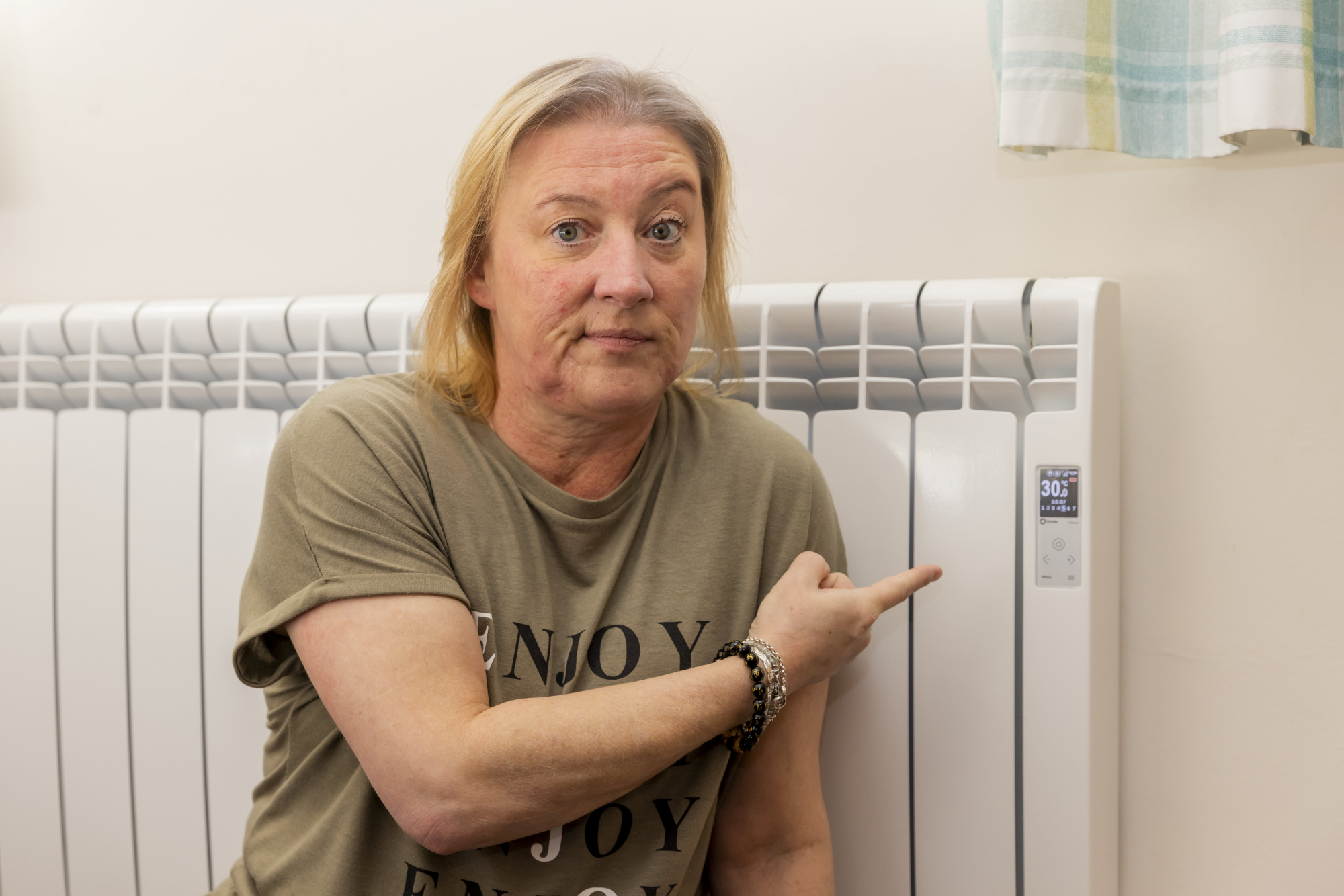 Sam Newland, 50, shows that each radiator in the house is set to 30 degrees on February 25, 2022. Newland is allergic to both cold and hot temperatures and has to have her heating on a constant 30 degrees in winter. (Leila Coker, SWNS/Zenger)

A woman with an allergy to the cold and heat says maintaining a perfect temperature in her home will see her bills shoot up by 525 percent.

Sam Newland, 50, has cold urticaria and develops rashes and painful welts on her skin when she gets cold.

Not only is there no cure, but the same symptoms are triggered by sweat.

She has to have her heating on a constant 30 degrees in winter – but keep fans on constantly around her home during hot weather.

During the recent heatwave, she has has to sleep with a fan above her bed due to keep her rashes at bay.

She said: “I have fans on all over my house as it’s too hot at the moment that my sweat is causing the rashes and it’s really painful.

“I can’t win- I have to have my heating on all the time during the winter and now I’m paying out loads to keep fans on to keep me cool in the summer.

“It’s bonkers and it’s not my fault that my body can’t cope with extreme heat or cold.

“This spike is worrying enough for us, so I’d hate how other people are feeling.”

Newland has suffered from cold urticaria since moving back to the U.K. from Singapore when she was just 13.

Doctors initially had no idea why she was developing rashes and welts and it took two years for them to diagnose the cause as an allergy to cold temperatures.

Unfortunately, there is no cure for cold urticaria, and due to the heatwave she has suffered the same symptoms caused by sweat.

Newland is only able to manage her condition with antihistamine while trying to keep her body at a warm temperature in the winter and cool in the Summer.

She has flare-ups every few days and set about trying to find treatments to help her condition.

Symptoms – including itching all over and ‘huge red spots’ – can be triggered by all sorts of cold weather, including damp or humid days and even just sitting on a brick wall.

Since diagnosis she has tried multiple antihistamine brands – settling on a supermarket’s own brand of Benadryl in her early 20s.

For other sufferers she recommends trying a variety of antihistamines to find what works for them.

“I take three a day and that is the best thing that helps,” she said.

“It’s been so warm that the sweat is running down my neck and back and causing the itchy blotches.

“I have fans on all round the house and one above my bed when I got to sleep.

“I haven’t even looked at the smart meter to see how much I am spending or using.

Newland, who lives with her husband, Andy, 60, a print finisher, already saw her heating bills soar to 60 pounds ($72) a month.

“I have to use fans to keep my symptoms at bay and come the winter I’ll have my heating hiked up.

“It will get to the point where my husband and I will be then choosing between eating or filling up the car to get to work.

“We live in the middle of nowhere so we rely on our care.

“We’re on comfortable salaries so it’s scary that we’re facing this.

“I’d hate to think how people worse off than us are feeling.”

«Previous Post
Lonely Divorcée Encourages Singletons To Enjoy Life»Next Post
The Biggest Gold Crucifix In The UK Is Expected To Fetch At Least $36,000 At Auction