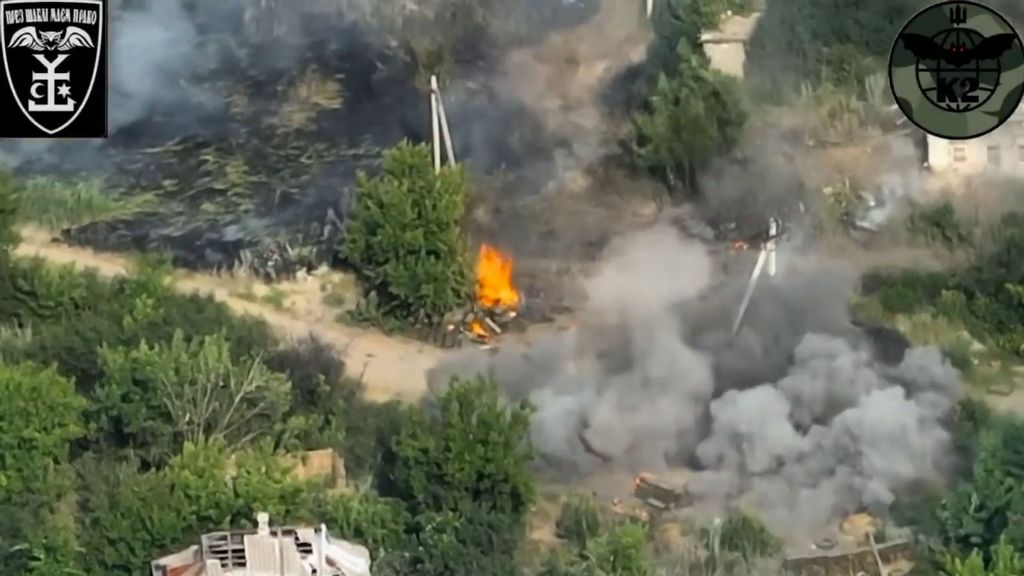 Russian mortar and boxes with ammunition explode and burn on a road and under trees in a forest area of Maryinka, Donetsk region of Ukraine in an undated footage. The reconnaissance group K2 of the 54th separate mechanized brigade destroyed Russian occupiers' 120-mm mortar and their ammunition depot. (@K2.54OMBr/Zenger)

This footage reportedly shows Ukrainian troops laying waste to a Russian mortar and ammo depot to protect civilians being targeted by the invaders in Donetsk.

The footage shows numerous explosions as the base, apparently located in a forested area of Donetsk, in eastern Ukraine, is destroyed piece by piece. The mortar can also be seen being marked out on-screen in the footage (in Ukrainian).

The footage was obtained from the 54th Mechanized Brigade K2 Battle Group of the Ukrainian Ground Forces, on Wednesday, August 17, along with a tongue-in-cheek statement saying (in Ukrainian): “Greetings, dear Ukrainian ladies and gentlemen!

“We continue to show you another trip of uninvited ‘tourists’ who got lost on the outskirts of the Ukrainian city of Marinka, Donetsk region.

“Now the unfortunate ‘tourists’ brought a deadly 120 mm pipe to our country and began to pelt the military and even more civilians with heavy iron from it.

“The guys from the K2 intelligence group started work with their famous comrades.”

They added that the “tourists” and the mortar had “received a ticket to the concert of their favorite singer Kobzon! Glory to Ukraine!”

Iosif Davydovich Kobzon was a Russian singer, known for his crooner style, who died in 2018.

The images were relayed by the Ground Forces of the Armed Forces of Ukraine.

Zenger News contacted the 54th Mechanized Brigade for further comment, as well as the Russian Ministry of Defense, but had not received a reply at the time of writing.