The footage was obtained from the Office of Strategic Communications of the Armed Forces of Ukraine on Wednesday, August 17.
By Joseph Golder August 19, 2022
Facebook
Twitter
Linkedin
Email 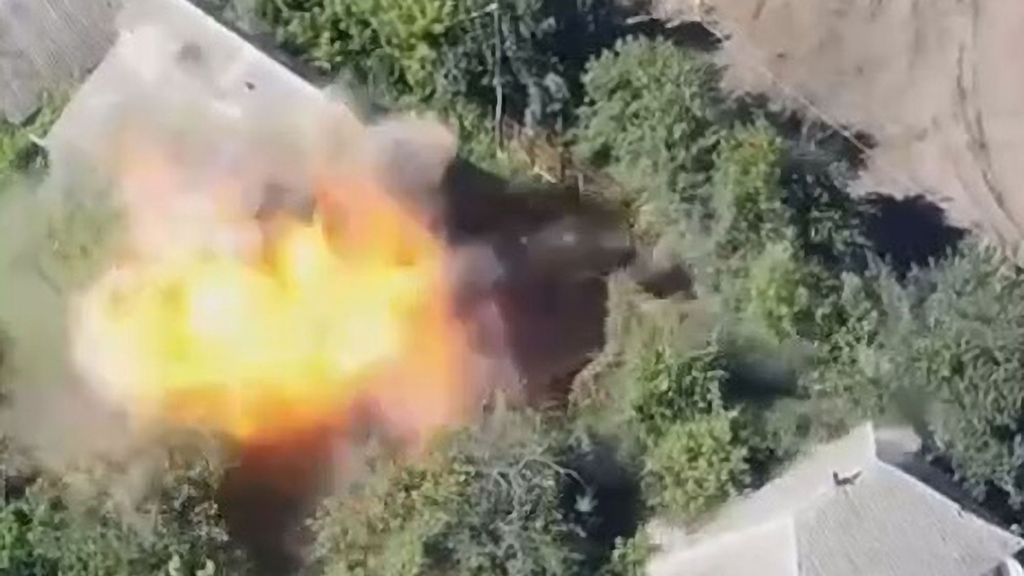 The picture shows the explosion of the Russian military settlement in Ukraine in undated footage. According to the Ukrainian military authorities one BMP, military equipment and Russian headquarters were destroyed by the SSO Azov fighters. (@AFUStratCom/Zenger)

This footage reportedly shows the Azov Special Forces unit destroying a Russian HQ somewhere in Ukraine along with a tank.

The images appear to show a Russian tank and Russian soldiers moving beneath some trees among some houses in a forested area. The images then show the area being hit by Ukrainian ordnance.

The footage was obtained from the Office of Strategic Communications (StratCom) of the Armed Forces of Ukraine on Wednesday, August 17, along with a statement saying: “SSO [Special Operations Forces] ‘Azov’ destroyed the ‘Katsap’ headquarters and at least one enemy ‘BMW’.”

‘Katsap’ means ‘billy goat’ in Ukrainian and is often used to refer to Russians as it conjures up a stereotypical image of a Russian man with a beard, while ‘BMW’ is understood to have been an ironic reference to the tank that was reportedly blown up in the footage.

It is unclear where the images were shot but the Azov SSO recently reportedly destroyed a Russian ammunition depot, BMPs and seven soldiers in the Kharkiv region.

The SSO is a branch of the Ukrainian military that is part of the Armed Forces of Ukraine and that is formed exclusively by Spetsnaz (special forces) units.

The SSO Azov-Kharkiv unit was created in Kharkiv on May 1, 2022, and is part of the Armed Forces of Ukraine. The unit says that it is “continuing the history of the legendary Azov regiment while preserving all its values &ZeroWidthSpace;&ZeroWidthSpace;and many years of military experience.”