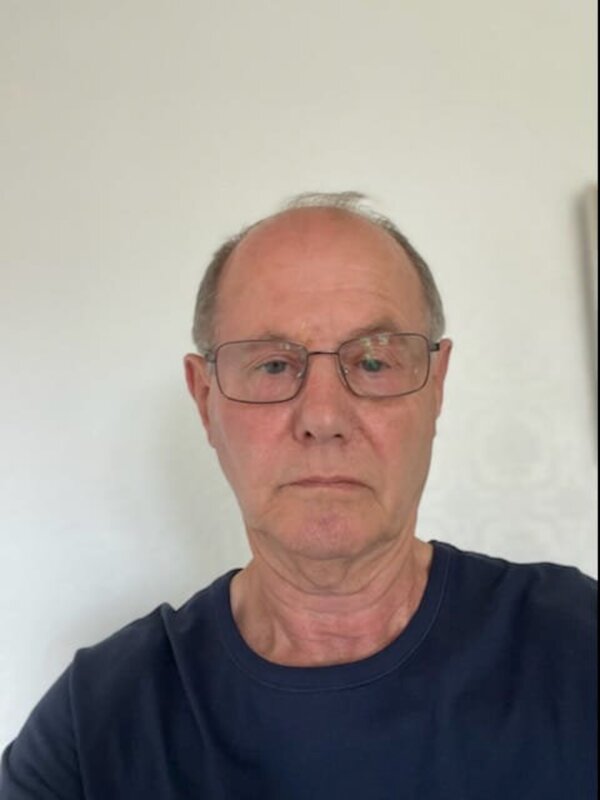 Roy Muller poses in an undated photo. Dramatic doorbell footage captures the moment Muller bravely wrestled with armed thugs on the driveway of his home after being tormented by yobs for months outside his property in Great Barr, Birmingham, in the U.K. on August 11, 2022. (Matthew Newby, SWNS/Zenger)

A shameless gang of thugs have been caught on camera returning to abuse a tormented pensioner just hours after they were filmed attacking him on his driveway.

Roy Muller, 76, says he has been left too afraid to leave his home in England’s eastern region after being plagued by masked miscreants on a daily basis since October last year.

Shocking CCTV footage captured him wrestling with armed thugs on his driveway while he was bludgeoned outside his property in Great Barr, Birmingham, in the U.K.

Despite the video being shared widely online, the same youths brazenly returned to his house just hours later to taunt the elderly man and launch a tirade of foul-mouthed abuse.

The latest doorbell footage filmed at 6 p.m. on Monday, August 15, shows the lads laughing and shouting “come on p***y” and “d***head”.

Muller can be seen coming out of his door to tell them “you better clear off” before one of them arrogantly sneers: “Remember me from last time yeah?”

The grandfather-of-nine says the gang then chillingly warned “we’ll be back again” before they ran off down the street.

He added: “I saw them coming down the road and thought ‘here we go again’. I went out to tell them to go away and they were just laughing at me.

“They surrounded me and were swearing and then warned ‘we’ll be back again’ and left so I’m worried now because of how much this has escalated.

“My neighbor called the police but they didn’t even bother to turn up. We even tried to call 999 [U.K. Emergency services] and they told it wasn’t an emergency and to call 101 [Non-emergency police contact] instead.

“Even after this footage has been shared across the world they still come back, it’s like they are getting a kick out of it.

“I just want the police to do something about it because they are out of control. It’s just getting beyond a joke. I don’t know why I’m being targeted.”

The retired municipal worker, who lives alone and suffered a heart attack last year, says police have failed to act despite being targeted by up to 14 youths on a daily basis.

He can be seen grappling with the youngster as he is struck with what he believes was a metal chain or dog lead.

Muller now says he is too scared to leave his home and has written to West Midlands Police’s Chief Constable Sir David Thompson in a last-ditch plea for help.

He said: “At my age I shouldn’t be forced to take the law into my own hands – especially after having a heart attack – but I don’t know what else to do.

“The police just don’t seem interested. It has slowly escalated and I’m worried what is going to happen next.

“It began with them just banging on the doors, they shout abuse and trample my garden. They throw stones at my house. It’s all a laugh to them.

“But somebody must recognize them. All the police ever do is come and record it and go away.

“They even said to me, be careful what I do in future because it could me that ends up getting into trouble. All I’m doing is trying to protect my home.

“The police say ignore them, but they need to sort them out because its giving them the message they can get away with his behavior.

“I’m scared to go out now and I’m constantly checking my CCTV or looking out my window. The stress is not good for me.”

A spokesman for West Midlands Police said previously: “We’re investigating after receiving reports of a man in his 70s being the victim of assault and harassment in Great Barr.

“We fully understand how distressing this is and are looking to safeguard the man while progressing inquiries to establish those responsible.

“Officers from the local neighborhood policing team are aware of ongoing anti-social behavior and are routinely monitoring the area as part of their patrols strategy.

“We take all allegations of harassment incredibly seriously, and we are committed to ensuring the safety of our community.