The Biggest Gold Crucifix In The UK Is Expected To Fetch At Least $36,000 At Auction 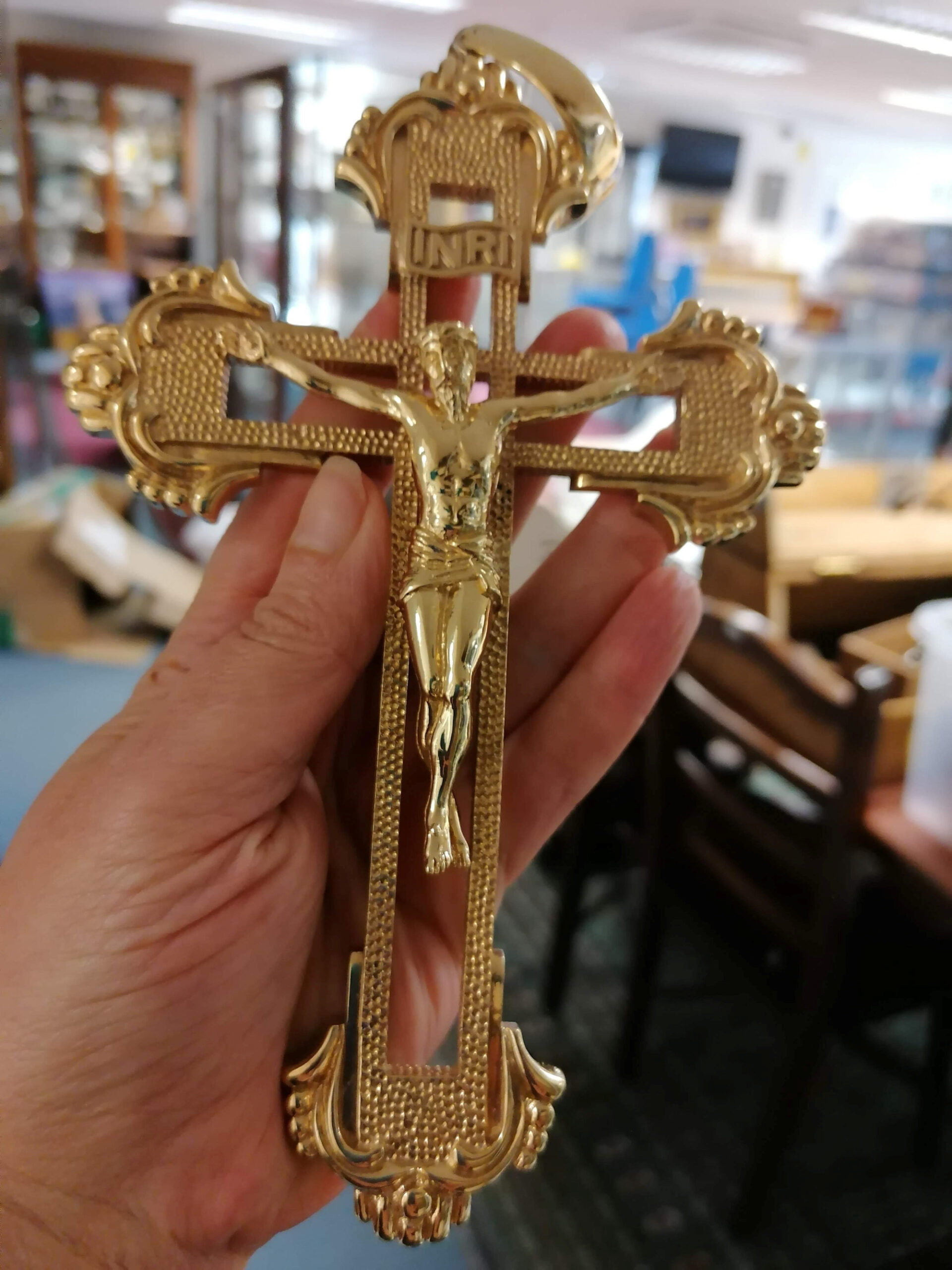 The giant 3-pound gold crucifix pictured in an undated photo. The nine-carat 9 inches-long cross is set to go for at least $36,000 on an auction at Hansons Auctioneers on September 22, 2022. (Simon Galloway, SWNS/Zenger)

The biggest gold crucifix in the U.K. is due to fetch at least $36,000 at auction – with bling-loving boxer Tyson Fury getting first dibs.

Andreo Montanino, 33, bought the chunky 3-pound treasure in honor of his beloved late grandmother who was a devout Roman Catholic.

The senior buyer spotted the nine-carat 9 inches-long cross in Birmingham’s iconic Jewelry Quarter and snapped it up over fears it could be melted down.

He is now selling the cross and chain and hopes gold-loving sports stars, including boxing heroes Tyson Fury and Anthony Joshua, might be keen bidders.

Andreo, of Trowell, England, said: “My nan would have hated the idea of the chain being scrapped.

“She was highly religious, a Roman Catholic who originated from Italy.

“She believed items like this, Jesus on the cross, were sacred and should be treated with the utmost respect.

“I had to buy it for nan. I had to save it from being melted down. I was in the right place at the right time.

“I found it at a bullion place where people send gold to be scrapped and items are usually processed quickly.

“That was three months ago. Now I hope bringing it to auction will help me find someone who will treasure it.

“Because it’s so special, a showpiece, it would work well if it was worn around the neck of a famous boxer on the walkout to the ring, someone like Tyson Fury or Anthony Joshua.

“It’s perfect for a sportsman, celebrity or someone from the music world who likes to make a big statement, perhaps a rapper.

“I see it featuring on a program like MTV’s Cribs or being bought by a famous basketball or NFL (National Football League) player.

“I really hope it finds a good home because that’s what nan would have wanted.

“She lived in Peterborough and was heavily involved with the Italian community and the Catholic church.

“I remember her buying a statue for her church. Religious icons were important to her.

“She was a wonderful nan and as the first of her four grandchildren I had to do right by her.

“It would be interesting to know who commissioned the cross originally. No one I have shown it to has ever seen anything like it before.

“I think it could be the biggest necklace of its kind in the U.K.”

The hefty cross and chain, which together weigh around 3 pounds, will go under the hammer at Hansons Auctioneers on September 22.

Helen Smith, Head of Jewelry at Hansons, said: “I have never seen anything like this,
or as big as this, before and we might not see anything like it again.

“It’s extra special. The chain links are huge and quality workmanship has gone into creating the iconic religious imagery of the crucifix.

“I love that Andreo bought this to honor his nan. It certainly deserves to go round the neck of a man who excels in sport or an important celebrity.

“Tyson Fury would be perfect as he is a devout Christian. Like Andreo’s nan, he would appreciate the religious significance and symbolism of the item.

“Gold is soaring in value at the moment so it’s a good investment piece too.

“It deserves to remain intact – not melted down for scrap. Let’s hope we can save it for posterity –and Andreo’s nan.”