“I would love it if they could acknowledge my song and wish us well in our marriage.”
By Simona Kitanovska August 19, 2022
Facebook
Twitter
Linkedin
Email 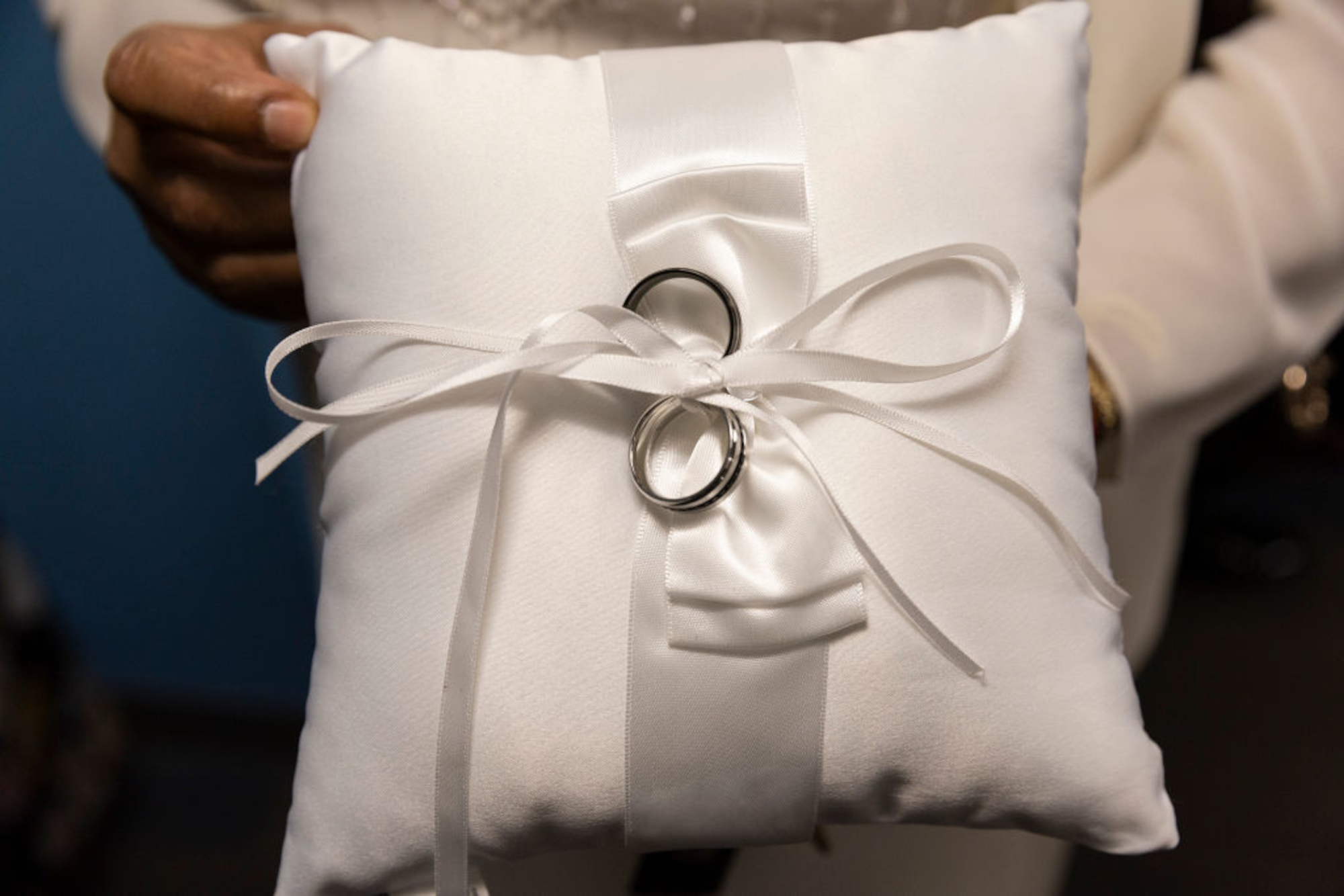 A pair of rings is held before a wedding ceremony at the Broward County Courthouse on 2/22/22 on February 22, 2022 in Fort Lauderdale, Florida. (Photo by Joe Raedle/Getty Images)

A couple from Sweden who tied the knot in a Highland Scottish wedding are hoping the Proclaimers rock duo will bless their marriage – after the groom made a cover of their hit song.

Record producer Christopher Caird Dominique and wife Tess, both 43, traveled from Lund in Sweden to Dunnotar Parish Church in Aberdeenshire, in Scotland, to be married.

The pair said their nuptials in the same spot Christopher’s six-times-great grandfather was wed – 220 years ago.

They had their first dance to a cover of Proclaimers’ hit song I’m Gonna Be (500 Miles) which Christopher created in his studio at home as a surprise for his wife.

He described the tune as the greatest Scottish love song of all time and now hopes the Proclaimers will hear the cover and wish them well in their marriage.

Dad-of-four Christopher said: “Not a lot of people listen to the lyrics but when you do you realize it’s a very beautiful love song, the greatest Scottish love song of all time.

“It’s a man telling a woman all the things he will promise her, which is want you want to hear when you are getting married.

“My version is much slower so I had to cut some bits out or it would have been ten minutes long.

“It was a surprise for my wife, I prepared it in my studio at home without her knowing.

“We have tried to reach out to the Proclaimers but not heard back yet.

“I would love it if they could acknowledge my song and wish us well in our marriage.”

The couple were joined by their children Ferdinand, six, and Nils, four – as well as Molly, 12, and John, ten, Christopher’s children from a previous relationship.

The children wore kilts in the Sinclair tartan, while Tess wore a traditional Swedish dress known as a Värend, made by Christopher’s Swedish grandmother.

Christopher planned the whole wedding himself as a surprise for his wife.

He had been hoping to bring her 94-year-old dad over to walk her down the aisle but he wasn’t able to make the trip.

Instead he had his father-in-law, who used to be a musician, play the drums on the cover song.

Christopher said: “As we were eloping there was only a small group of us, our children and some of my relatives from Glasgow.

“I really wanted to surprise my wife by bringing her father with us to walk her down the aisle but he is 94 years old and I wasn’t able to make it work.

“He was a musician so instead I got him to play the drums on the song which was amazing.

“Her dad was with us in spirit through the song which was wonderful.

“I wore Sinclair tartan and my wife wore a traditional Swedish dress known as a Värend, which was made by Swedish grandmother.

“I planned the whole wedding, all she knew was where we were getting married.

“It was amazing she trusted me to do the whole thing, but I have played at nearly 300 weddings so I do know a bit about them.

“I think she felt like she was in safe hands.

“It was a simple, beautiful ceremony and amazing to be married in the same place as my ancestors.”

Apart from their smash hit 500 Miles, the Proclaimers are also known for their song Letter from America, as well as their political activism. the duo consists of twin brothers Craig and Charlie Reid.