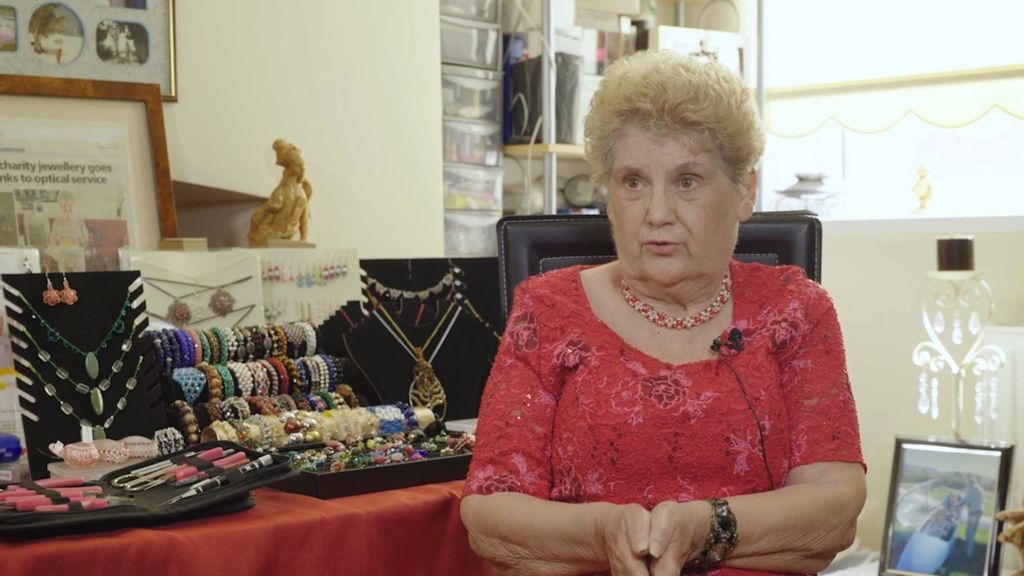 Jean, an older woman who makes jewelry for charity in undated photo. She finds that making for charity really helps her remove the feelings of loneliness. (Ashley Moran, SWNS/Zenger)

Millions of older people are loneliest in the summer – as they get fewer visits from loved ones and have more hours in the day to fill.

Research into 1,400 retired people discovered 27 percent feel disconnected when loved ones’ social schedules ramp up as the temperatures rise, leaving less time for them to check-in.

And with the country experiencing record temperatures this summer, 43 percent are also struggling in the heat, which can cause them to become isolated from their family and friends.

It also emerged 57 percent think people talk more about loneliness in older people during winter than the summer months, with 62 percent believing isolation during the warmest time of year is just as big an issue.

The research was commissioned by Specsavers Home Visits, to support its #GenerationWOW campaign, which aims to give older people a platform to pass on their skills and life experience to others.

Katie James, a director and optometrist for the service, which offers free at-home eye tests for those who are eligible [www.specsavers.co.uk/home-eye-tests], said: “During the summer months when people typically have more plans, it’s easy to forget older people may be missing out on valuable interaction with loved ones as a result.”

“The research has shown there is a hidden issue around loneliness in older people during this period. And with the days being longer, no doubt it can often feel quite a lonely time for many,” James said.

The study also found 62 percent of those polled believe people popping around is a lifeline when they are feeling secluded in the summer.

While 47 percent have tried joining social clubs – either locally or online – to curb their solitude.

But 22 percent are homebound for long periods in the summer as they struggle to fill the days, even if they would normally be able to leave the house alone.

And, despite the average respondent living with two people, 58 percent said even when surrounded by others, they can sometimes still feel alone.

Nearly one in six -14 percent – will go a week without having a face-to-face conversation with someone close to them, with 40 percent sometimes going multiple days during the summer without a chat in person.

But while 41 percent would like to make more friends, 16 percent find this difficult, according to the OnePoll data.

Boredom can set in for 26 percent when they go longer than usual without having a meaningful conversation, while 19 percent experience feelings of sadness.

Despite their emotional state, six in 10 only want to be visited by relatives if they want to, as they don’t want to feel like a burden.

“Even a small conversation that might appear insignificant could have a huge impact on an older person’s day.

“Hopefully this research goes some way to highlighting a hidden problem, and readers will use this as a reminder to pick up the phone or visit an older relative who might be hiding their feelings of loneliness.

“Our teams look to give those who are housebound some much-needed face-to-face interaction while providing an important service which helps them maintain their quality of life,” James of Specsavers Home Visits said.

The company is also launching an at-home hearing service in areas of Britain.