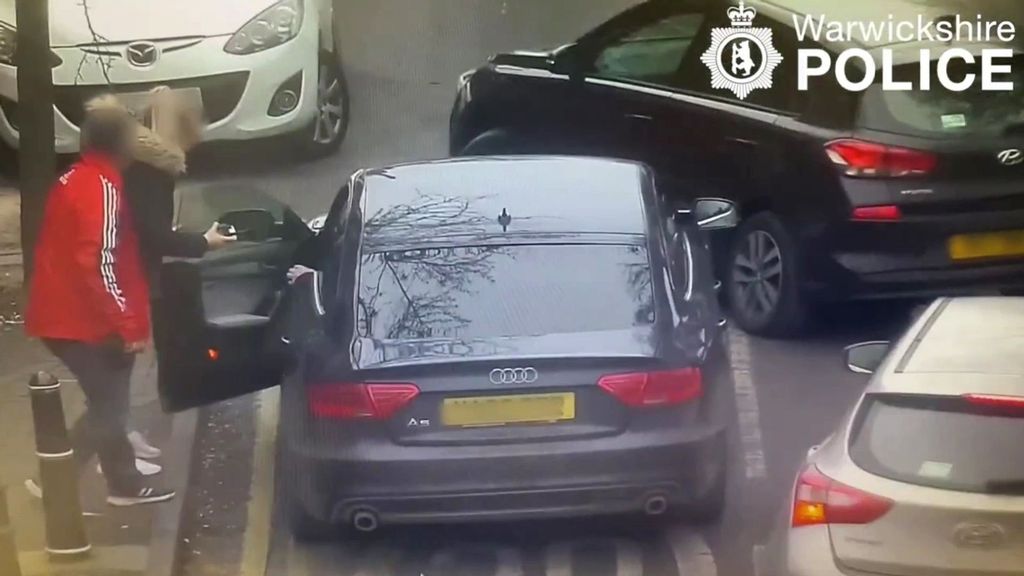 Police confront drug dealer, Matthew Crofts, 24, in March 2021, in Warwickshire, England. Crofts was sentenced to 54 months in prison for hitting officer with his car in failed attempt to evade justice. (Warwickshire Police/Zenger)

This shocking footage shows the moment a police officer is almost badly hurt when she tries to arrest a suspected drug dealer who then suddenly puts his car into reverse.

The operation to arrest 24-year-old Matthew Crofts when he was dealing drugs in his car on Bath Street in Rugby, England, started with police pulling up in front of him on March 3, 2021.

Crofts was in the driver’s seat of the black Audi A8 as the rear side door opens and a man in a red shirt stepped out onto the sidewalk.

A blonde woman who is a plainclothes detective then climbs out of the unmarked police car and goes round to the passenger side to open the front door as the man closes the rear door.

Another car believed to also be an unmarked police car, with its passenger door still open, then comes to the rear of the vehicle but does not completely block it as the police officer attempts to make the arrest.

Crofts reversed at speed, striking the constable in the process.

The video shows that he then continues to reverse toward oncoming vehicles on Clifton Road before then putting the vehicle into forward gear and speeding off.

The door on Crofts’ car is seen hanging off its hinges as he speeds off down the road, narrowly missing other traffic, and leaving the detective who gave chase unable to follow.

Crofts made his way to a friend’s house, where he hid evidence of his drug dealing but did not manage to escape a jail term.

Crofts’ dangerous attempt to avoid being caught came to nothing when officers discovered the address and seized the evidence.

In Coventry Crown Court, Croft was sentenced to 54 months in prison on August 5.

Detective Constable Matthew Rapkins of Rugby Proactive Criminal Investigation Division said: “This was an outrageous incident in which a drug dealer was prepared to put members of the public’s lives at risk in order to get away and save himself.

“He has knocked over a Police Officer in the process.

“Thankfully, nobody was seriously hurt and his efforts to hide evidence was all in vain as officers quickly located the evidence.”