"We remember how they came, how they loved our resorts, how we met and believed then in this lie about a brotherly people."
By Joseph Golder August 19, 2022
Facebook
Twitter
Linkedin
Email 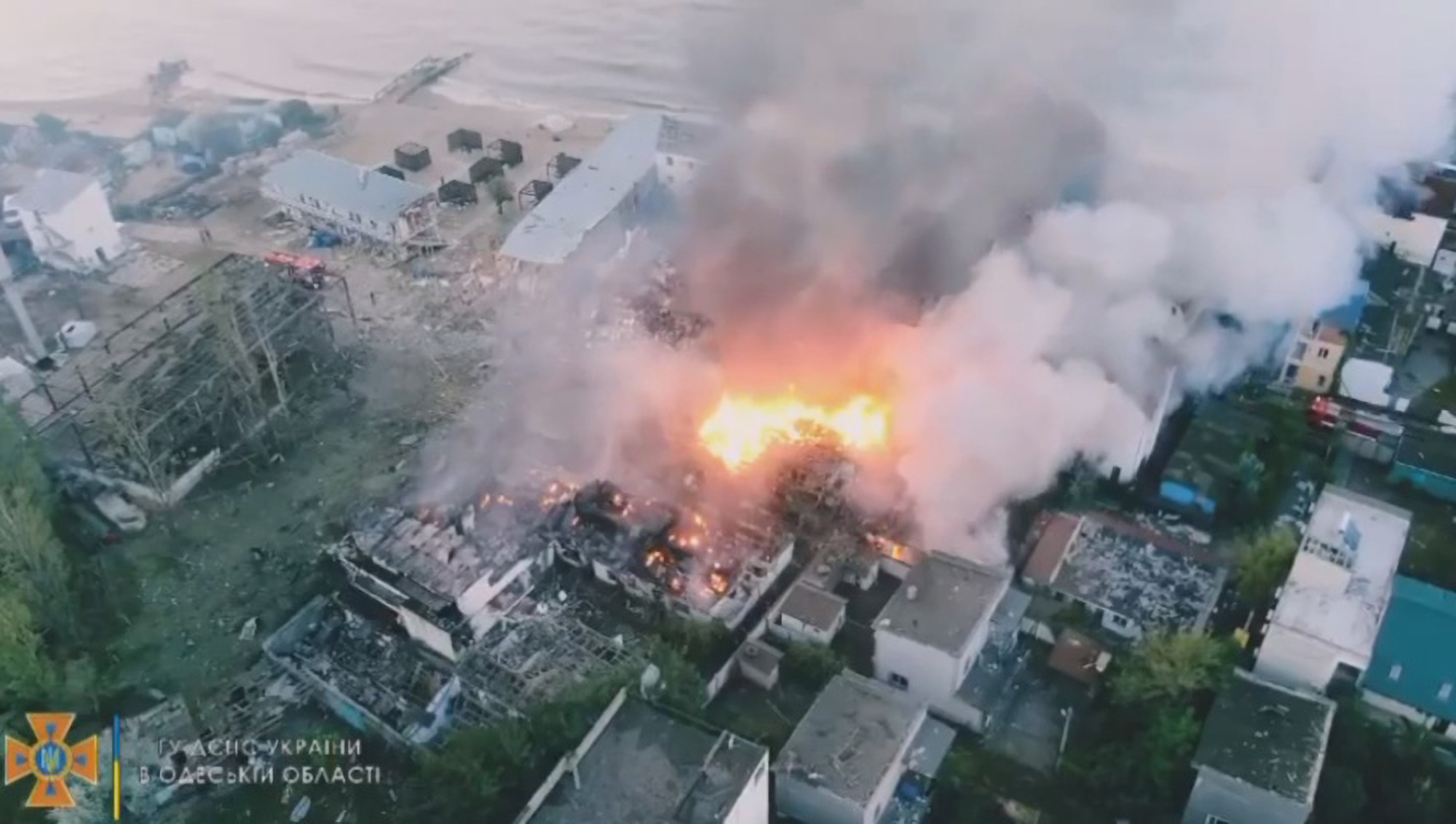 Buildings burn in one of the resorts of Odessa region, Ukraine, Wednesday, Aug. 17, 2022. As a result of the rocket strike, two recreation centers and two residential buildings were destroyed, walls, roofs and windows were broken in neighboring houses and outbuildings, four people were injured and hospitalized according to statement of the Odesa Regional Prosecutor's Office. (@MNS.GOV.UA/Zenger)

The footage was obtained from the State Emergency Service of Ukraine on Wednesday, August 17, along with a statement saying: “Odesa firefighters eliminated the effects of rocket shelling.

“As a result of the hit of missiles, there was destruction and burning of buildings in one of Odesa’s resorts.”

They added that firefighters had battled the blaze for nearly five hours and said that four people had been taken to hospital with moderate injuries, with an on-site psychologist working with locals. No deaths have been reported. It was unclear at the time of writing if the fire had been fully extinguished.

The main department of the State Emergency Service of Ukraine in the Odesa region also relayed the statement and the footage, and said: “Odesa residents remember the phrases ‘how wonderful it is here’, ‘we rest here every day’, ‘you have the most delicious fruits, and your Odesa wine is a total fairy tale’.

“We remember how they came, how they loved our resorts, how we met and believed then in this lie about a brotherly people.

“And the same bad guys are now trying to destroy these resorts, destroy our lands, our country. But they have only started a boomerang…”

The Odesa region’s Public Prosecutor’s Office has opened an investigation into the incident. It said in a statement obtained by Zenger News, on Wednesday, August 17: “There are no military facilities in this area.”

The Public Prosecutor’s Office added: “Under the procedural guidance of the prosecutors of the Bilhorod-Dniester district prosecutor’s office, criminal proceedings were initiated on the fact of violation of the laws and customs of war (Part 1 of Article 438 of the Criminal Code of Ukraine).

“According to the investigation, last night, [in the early hours of] August 17, the military of the aggressor country, disregarding the norms of international humanitarian law, once again launched rocket attacks on the peaceful population of a resort village in the Bilhorod-Dniester district.

“As a result of the rocket strikes, two recreation centers and two residential buildings were destroyed and subsequently caught fire. Walls, roofs and windows were broken in neighboring houses and outbuildings. At least 30 private households were destroyed.

“Four victims were preliminarily identified who were injured and hospitalized, in particular, a security guard of one of the recreation centers was taken to the hospital with a concussion. Measures are being taken to identify other persons who suffered physical or other damage as a result of being hit by enemy shells.

“Prosecutors of the Bilhorod-Dniester District Prosecutor’s Office, police investigators, experts, and rescue workers are working at the scene. Debris from rocket mechanisms was identified and removed, which will be sent for appropriate examinations.”

Zenger News contacted the State Emergency Service of Ukraine for further comment, as well as the Russian Ministry of Defense, but had not received a reply at the time of writing.