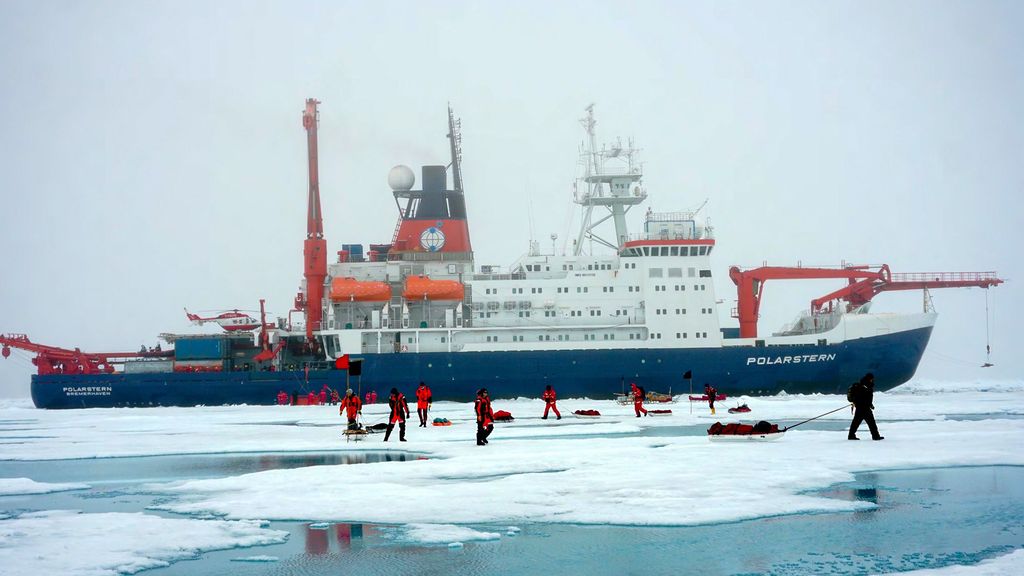 Scientists on the PS131 enter an ice floe in the ice edge zone north of Spitsbergen. The Polarstern was expected to arrive at the Lloyd Werft pier in Bremerhaven, Germany, on Wednesday, Aug. 17, 2022. (Alfred-Wegener-Institut, Vera Schlindwein/Zenger)

The Polarstern icebreaker returned to port in Germany on Wednesday after spending 51 days conducting research in the Arctic amid record heatwaves this summer.

The researchers were investigating how increasingly warm Atlantic waters are affecting two glaciers in north-eastern Greenland.

The ice is receding on the glaciers and this in turn is contributing to a rise in sea ice levels, according to a statement from the Alfred Wegener Institute (AWI) which was obtained by Zenger News.

The statement also confirmed again that, as a result of climate change, the size of Arctic sea ice during the summer period has declined by 40 percent over the last 40 years.

The AWI statement said: “For the past seven weeks, the research vessel Polarstern has been traveling in the Arctic. Here the summer extent of the sea ice has decreased by 40 percent in the last 40 years – and thus represents one of the most visible consequences of climate change.”

The AWI also said: “In order to understand such changes, the research teams on board the Polarstern studied the Atlantic water circulation in the Fram Strait and the sea-ice edge zone to the north of Spitzbergen and the ocean-glacier interaction near Greenland.

“The research focus was on how the ice properties, heat flows and water stratification in the ocean control sea ice melt and the ecosystem of the ice margin zone.

“On the other hand, the warming of the Atlantic water circulation and its influence on marine glaciers in Northeast Greenland was investigated.”

Expedition leader Professor Torsten Kanzow from the AWI, Helmholtz Center for Polar and Marine Research, said in the statement: “We suspect that the fragmentation of the sea ice in the ice margin zone associated with the swell has a major impact on the melting ice and also on the ecosystem linked to the sea ice.”

The Polarstern had left port in Bremerhaven on Germany’s North Sea coast on Tuesday, June 28, and first went to the Fram Strait, the passage between Greenland and Svalbard.

The statement said: “The focus of the work here was on continuing the interdisciplinary time series measurements in the area of &ZeroWidthSpace;&ZeroWidthSpace;the West Spitsbergen Current, which have been providing data continuously since 1997 from observatories anchored on the sea floor. The West Spitsbergen Current transports warm water from the subtropical North Atlantic to the Arctic Ocean.”

The team then went to the ice edge zone in the north of Spitsbergen. The statement said: “Over the course of three weeks, the scientists repeatedly documented the summer disintegration of selected ice floes. In this context, they also studied the energy and material flows between the ocean, sea ice and the atmosphere.”

The final leg of the expedition saw the teamwork off the eastern coast of Greenland, where the researchers investigated the ocean’s influence on melting marine glaciers. The statement said that “the flow velocities of the glaciers are accelerating, thus contributing to the rise in sea ice levels.”

The AWI also said: “Over the next two weeks, the crew will prepare the Polarstern for the next expedition, which will take them to Antarctica at the end of August.”