Mother Jade Gordon was 18 and dad Kieran Connell was just 16, when Noah arrived in May 2017.
By Simona Kitanovska August 19, 2022
Facebook
Twitter
Linkedin
Email 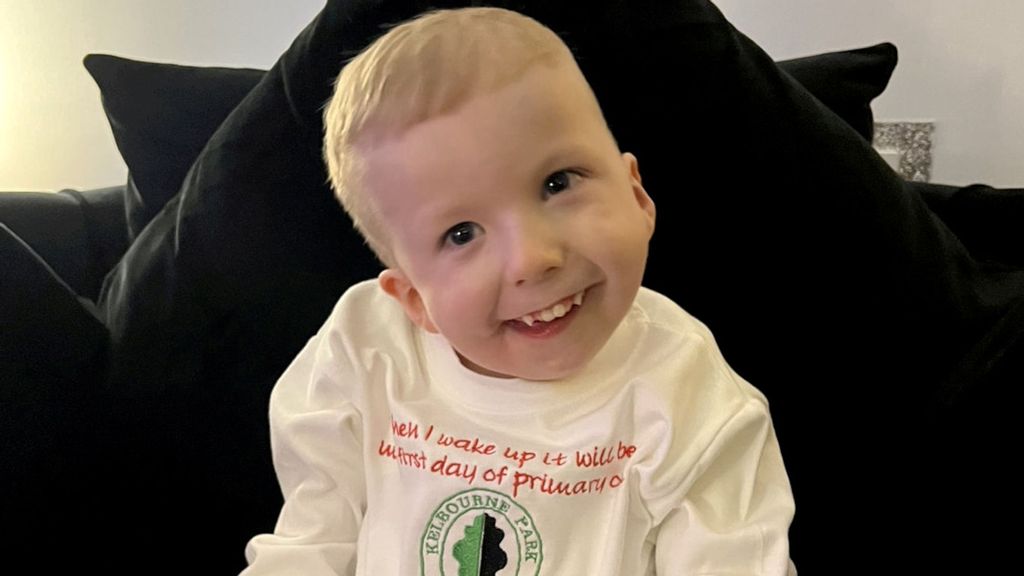 Noah Connell, a little boy born with a rare condition which means rain could kill him, celebrated his first day of school on Wednesday, August 17, 2022. Noah became the first baby in the U.K. to have metal scaffolding inserted into his face. (Matthew Newby, SWNS/Zenger)

A little boy born with a rare condition which means rain could kill him celebrated his first day of school on Wednesday, August 17.

Noah Connell, five, was born unexpectedly when his parents were both teenagers, and had no idea they were expecting.

Mother Jade Gordon was 18 and dad Kieran Connell was just 16, when Noah arrived in May 2017.

The child was born with multiple health conditions which baffled medics, who referred to them as ‘Noah syndrome’ – and became the first baby in the United Kingdom to have metal scaffolding inserted into his face.

He has had 11 operations in his life, and was born with part of his spine missing, an underdeveloped jaw, cleft palate, small neck, and floppy airway.

He also has hemifacial microsomia, which means the lower half of one side of his face is underdeveloped – and means if anything gets into his mouth including water, it could kill him.

But five years later, Noah, from Glasgow, Scotland, has flourished and achieved milestones his parents thought he would never see.

And today he will be looking sharp in his new blazer as he joins his classmates at Kelbourne Park Primary School in Scotland’s biggest city.

Mom-of-one Jade, 23, said: “The last five years have gone by in what feels like six months.

“It’s been dead, dead emotional, especially seeing him in his uniform.

“I have been crying and there will be tears when we wave him off because he has defied everybody’s expectations – even ourselves.

“He keeps learning to do more and more and proving everybody wrong.

“We are just so proud, overwhelmed with pride.”

When Noah was born at Glasgow Royal Infirmary weighing 6 pounds 7 ounces, he wasn’t breathing and was whisked away immediately for emergency treatment.

Photos of Jade at her eighteenth birthday party show no sign of a baby bump, despite the fact she would have been six months pregnant.

So when she went into the hospital with stomach pains, it took doctors a few hours to spot she was in labor – and then Noah appeared.

He was diagnosed with Pierre Robin Sequence: facial abnormalities that cause problems with breathing and mean he cannot swallow.

Noah became the first baby in the United Kingdom to have metal scaffolding inserted into his face to hold bone fragments in place and save his life.

Surgeons at the Royal Hospital for Children in Glasgow carried out an operation called a mandibular jaw distraction – breaking the jaw in two places then straightening his face with metal rods.

His tongue was pushed forward to cut the chances of him choking.

Jade remembers the two parts of the operation as if it were yesterday, waiting for 12 hours for the first part of the procedure to be done and then 10 hours for the second.

It was 10 months before he was discharged from the hospital and Kieran and Jade were taught how to turn the screws in the metalwork by precise measurements.

Despite everything he was going through, Jade says Noah is the “smiliest” little boy who loves shaking hands with people he meets and is crazy about Christmas, Scotland’s Celtic soccer team, and the British girl group Little Mix.

Noah’s best friend at nursery will also be in the same class at school with him and Jade says the pair are “double trouble.”

Jade said: “He is so loved.

“Noah sees so many different specialists and is at hospital all the time but we’re just used to it.

“I wouldn’t change a single thing.”

Jade revealed that not everyone is kind toward Noah with online trolls saying desperately cruel things about the kid and his family.

People often also stare when they are out in public but Jade says they do not let negativity affect them.

Jade, who was in college training to be a nursery nurse when Noah was born, said support from Glasgow Children’s Hospital Charity has helped the family.

The family had cuddles with their little boy in the pediatric intensive-car unit using the charity’s MoVE project and he loved passing long hours in the hospital with sensory equipment funded by them.

Kirsten Watson, CEO of Glasgow Children’s Hospital Charity, said: “Starting school is such an important milestone, and we hope that Noah and all of the patients we support have a very special time at school this week.

“For 20 years our charity has supported children like Noah, and we’re incredibly grateful to the people of Glasgow for their generosity.”