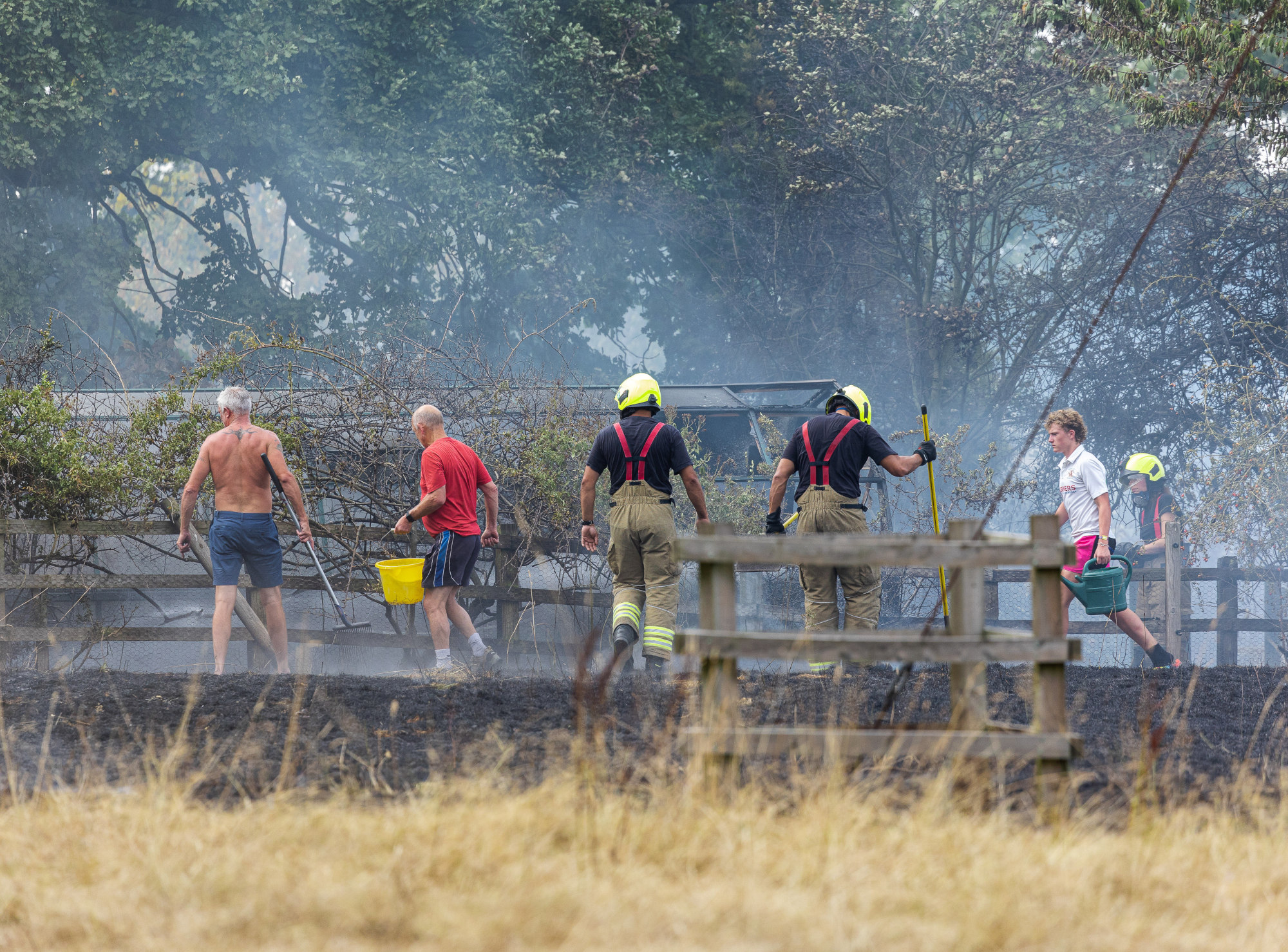 These images show heroic villagers running to tackle blazing field fire - with buckets and watering cans filled from a cow trough in Gloucestershire, in the United Kingdom, on Sunday, August 14, 2022. Men, women, and children came together to battle the fire in the Cotswolds region until emergency services arrived at the scene. (Robert Wakeham,SWNS/Zenger)

These images show heroic villagers running to a tackle blazing wild fire – with buckets and watering cans filled from a cow trough.

Men, women, children came together on Sunday, August 14, to battle the fire in England’s Cotswolds region until emergency services arrived at the scene.

As the fire was dangerously close to nearby buildings, villagers from Apperley, located in Gloucestershire, in the United Kingdom, were seen running around to fill up watering cans, buckets and anything they could get their hands on.

A local resident who was traveling back home from a day out saw thick black smoke across the horizon from miles away.

But as Joan and her husband Robert Wakeham drew closer to home, they were “hit with dread” upon realizing the fire was in the village where they lived.

“We were coming up from the A38 in Gloucester, a while away from home, and could just see this thick smoke that was really black.

“When we made a turning towards Apperley, a fire engine sped in front of us and then we realized it was headed to our village!”.

Gloucestershire-based photographers say they were immediately “touched and amazed ” at how people from all ages had come together to help.

Ms. Wakeham said: “Loads of villagers were running around, all battling together and fetching water from the trough.

“It was great to see in this day and age how everyone pulled together.”

According to the resident, locals were very concerned about a particular property nearby to the blaze that homes people with disabilities.

It was reported that villagers went to the home to evacuate its residents and a greenhouse alongside a wooden outbuilding were the main casualties of the fire.

Ms. Wakeham described the chaotic scene when they arrived at roughly 4 p.m. saying: “One 11-year-old boy was running with buckets chucking water at the fire, with another very young girl helping him – working hand in hand to stop the fire spreading.

“There were so many little children too, and parents even arrived with a baby in a cot!

“There was one man with no shirt on sprinting about in his flip-flops throwing water on the blaze.

“It was pretty incredible.”

Ms. Wakeham explained that the villagers had been at the scene for at least half an hour before firefighters arrived, and even upon their appearance the locals were working with the emergency services to stop the flames spreading.

She said: “Two fire engines that arrived on scene didn’t have enough water – so had to leave and go back to the nearest fire hydrant

No one is yet aware of how the fire started.

Ms. Wakeham added: “There are no footpaths on that particular field, so not a lot of people walk through it.

“It could be because of the heat as the ground was tinder dry – so a fire could have just sparked up.”