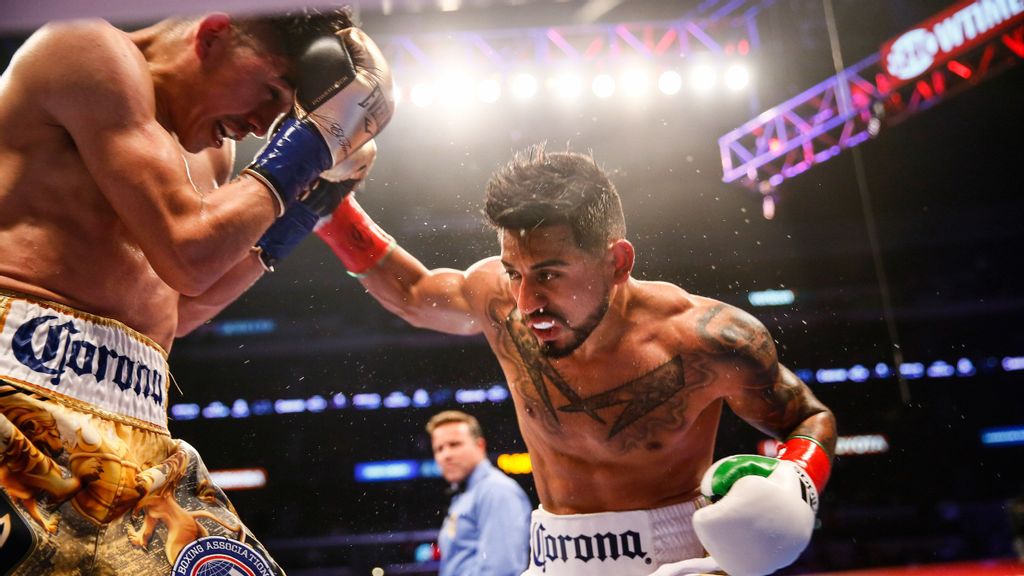 Abner Mares attempts to penetrate the guard of Leo Santa Cruz during their 2018 rematch. (Stephanie Trapp/Showtime)

Abner Mares knows that reality well. He returns to the boxing ring on Sept. 4 against Miguel Flores, which many consider a high-risk fight.

Mares suffered a detached retina while preparing to face superstar Gervonta Davis. The fight never happened — but the postponement led Mares to announce his retirement from boxing, while assuming a commentator role with Showtime Championship Boxing.

Now, four years later, Mares will be stepping back in the ring on a Pay-Per-View card, headlined by heavyweights Andy Ruiz and Luis Ortiz. Mares refuses to weigh the risk-reward ratio. He’s just happy to do what he loves: fight.

Abner Mares talks to Zenger about what keeps him going.

Zenger: Given the magnitude of your eye injury and your Sept. 4 comeback, the only fighter that comes to mind in this kind of situation is Sugar Ray Leonard. Have you talked to him?

Mares: I have. The very first year when I retired, I remember I wanted to come back. I saw Sugar Ray Leonard at an event he was hosting and told him about my eye issues: “I want to come back. What do you think?”

Ray said: “One thing I have to advise you, don’t follow your heart, follow your body and how it feels. Your heart is always going to tell you that you can do it. But really train and see how it feels and how it responds. If it’s good, just do it. I did it. That’s one thing I tell my coaches, even now, when I started training. I told my father, my coach and my close friends: “If in a sparring session, or during training, if you see that I’m looking like shit, be a friend and tell me right then to hang ’em up.” I still haven’t received those comments, so I guess I’m looking all right.”

Zenger: Given the fact you appear regularly on Showtime, does it feel like you haven’t fought in four years?

Mares: It doesn’t feel like four years until you guys mention it. Honestly, I’ve lost weight like nothing. It’s really the same process like every other fight, as if I just fought three or four months ago. The same aches of getting back into it. I’m not going to lie; this is real. The timing is the key. You gotta get your timing back 100% in sparring. Danny Garcia said it during his comeback. He said he sparred a lot, and that’s what you need to do. That’s exactly what I’m doing.

Zenger: Would you deem Sept. 4 as a last fight or last run?

Mares: Last run, because I want to see where my body is. If I say my last fight, I’m really just stating one more fight and that’s it. I think this is my last run. I want to see how my body feels. Obviously, in a fight, it’s a lot different. If it feels good, we’ll go on to one more fight. If not, I’m back to being retired. I’ll be in the same place I was. There is no pressure.

Zenger: There are plenty of veterans out there on a last run, plenty of guys with a decent record. Why a young, hungry guy like Miguel Flores as a comeback opponent?

Mares: I could have fooled myself. I would be fooling myself and the people if I chose an easy comeback opponent, boom take him out, and be like: “I told you guys, I’m back.” That’s not the case. I really want to push myself and see where my body is — and where I am in the boxing world. That’s why we chose Miguel Flores.

Zenger: You have fought in this arena several times, but the first time at the Crypto.com Arena. What does that mean to you?

Mares: It’s hard getting adjusted because I fought so many times there as The Staples Center. Now, Crypto.com Arena&mldr; it means a lot because it’s my hometown in L.A. All my good fights were here — even my first title attempt against Jonathan Perez. I was the undercard of Israel Vazquez against Rafael Marquez. I fought Anselmo Moreno and Leo Santa Cruz there. Me coming back after so long and to be fighting here is a blessing. It’s comforting. All my friends are going to be there. My family, my daughters and my wife. It’s a short distance from my house, so it couldn’t be any better.

Zenger: You study fights and fighters now for commentator purposes. Has that translated into studying Miguel Flores as an opponent?

Mares: In all my past fights, I would not study fighters. I would let my coach do it, and he would accommodate the sparring to the style that I’m fighting. I always knew my sparring resembled who I was fighting against. But this time, like you said, I’m accustomed to studying fighters to call fights, seeing their style, what they do right, and what they do wrong. Now, I’m using that as an advantage.

It’s my time to study Miguel Flores and see his flaws, and what he does right. I’m doing my homework. Someone made a funny comment on my post. They said: “Abner, you better put your words into action. When you call a fight and break them down, you better do what you were saying.”

Zenger: What were you looking for in yourself when this training camp first started, when you agreed to come back, to assure yourself that moving forward with this fight was the right move?

Mares: The key for this is the love. You gotta have the love and passion for the sport. Anyone can get ready for a fight. I just saw recently, Amir Khan made a comment about his last fight. He said: “I didn’t have the passion, I just trained because I had to. I got ready because I had to get ready, and I just fought because I had to fight.” When you do that, the results won’t be favorable to you. You were just doing it out of emotion. That was key. You gotta love it and enjoy it. That’s why I have no pressure. I have been away for four years, but no pressure.

I know I have an injury. I’m supposed to look good. Really, I’m not paying attention to any of this stuff. I’m just going in there and having fun, brother. This is another opportunity for me, in my hometown to please myself, to give my family and close friends a show. It’s Labor Day Weekend, so I’m going to go out there and have fun and enjoy myself.

When people tell me it’s a risky fight, I have already won because I got a fight. Not many people can say they came back after being off for so long and took on a tough opponent on Pay Per View. I already won, brother. I’m blessed, man.