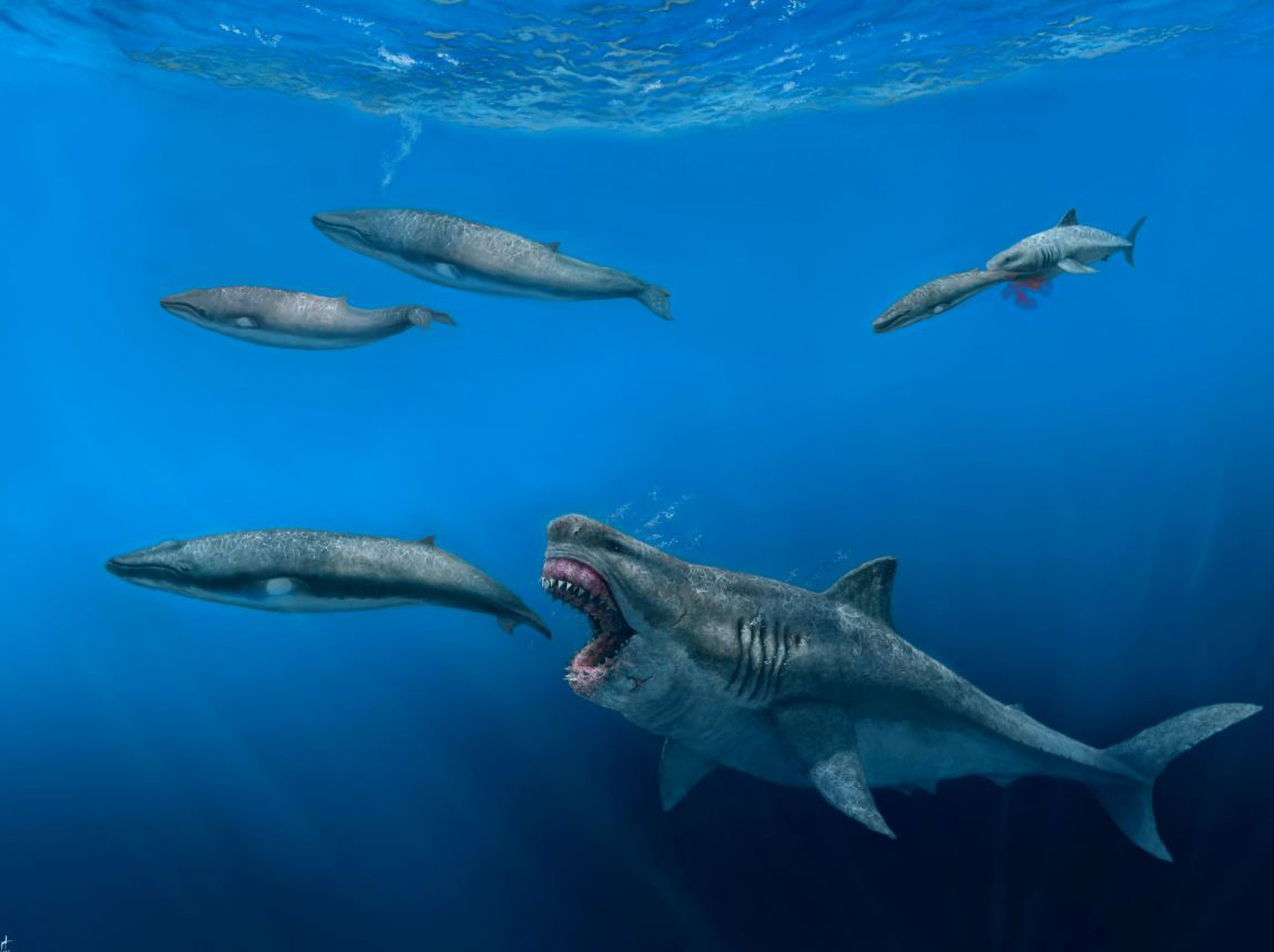 An illustration of megadolon eating their pray, undated. Scientist theorize the megadolon might require over 98,000 kilo calories every day and have stomach volume of almost 10,000 liters. (J. J. Giraldo/Zenger)

Research of a 3D reconstruction of the largest shark that ever lived reveals that it was capable of devouring prey up to 26 feet long in one piece.

Otodus megalodon is an extinct species of mackerel shark that lived approximately 23 to 3.6 million years ago.

Meaning ‘big tooth’, the megalodon had teeth the size of a human hand.

It was formerly thought to be a close relative of the great white shark. However, it is now classified into an extinct family that diverged from the modern great white shark as seen in the 1970s blockbuster movie Jaws.

An international collaboration of scientists has now created a three-dimensional computer model of its full body based on one individual megalodon which was discovered around 160 years ago in Belgium.

Against all odds, a sizeable portion of its vertebral column was left behind in the fossil record after the creature died at the age of 46 years, approximately 18 million years ago.

Experts from Switzerland, the United States, the United Kingdom, and South Africa participated in the project.

Their examination results suggest that the gigantic ancient shark had been able to fully consume prey the size of today’s killer whales and then roam the seas without any more food for up to two months.

Co-author Jack Cooper from Swansea University in Wales added: “Shark teeth are common fossils because of their hard composition which allows them to remain well preserved.

“However, their skeletons are made of cartilage, so they rarely fossilize.

“The megalodon vertebral column from the Royal Belgian Institute of Natural Sciences is, therefore, a one-of-a-kind fossil.”

The megalodon swam all over the world’s ancient oceans. Its fossils have been excavated from various parts of the world, including Europe, Africa, North and South America, and Australia.

The reconstructed megadolon was 52 feet long and weighed more than 67 standard tons.

Scientists think that it was able to cover 4.5 feet per second and require over 98,000 kilocalories a day.

The megalodon was able to eat prey as long as 26 feet, according to the new study based on the three-dimensional model.

Zurich University researchers underline that this is the size of today’s most notorious predator of the world’s oceans, the killer whale.

“An ability to eat large apex predators of comparable size millions of years ago places megalodons at a higher trophic level than modern top predators,” said the university statement.

To obtain new information on the giant ancient shark, the international panel of scientists first measured and scanned every single vertebra before reconstructing the entire column.

The researchers then attached the column to a 3D scan of a megalodon’s teeth from the United States.

The model was completed by adding digital ‘flesh’ around the skeleton using a 3D scan of the body of a great white shark — Carcharodon carcharias — from South Africa.

“Weight is one of the most important traits of any animal.

“For extinct animals, we can estimate the body mass with modern 3D digital modeling methods and then establish the relationship between mass and other biological properties such as speed and energy usage,” explained co-author John Hutchinson of Evolutionary Biomechanics at the Royal Veterinary College in the United Kingdom.

The 3D model can now be used as a starting point for future reconstructions and further research, according to Zurich University.

“The novel biological inferences drawn from this study represent a leap in our knowledge of this singular super predator.

“They help to better understand the ecological function that megafaunal species play in marine ecosystems and the large-scale consequences of their extinction,” said a statement from Zurich University.