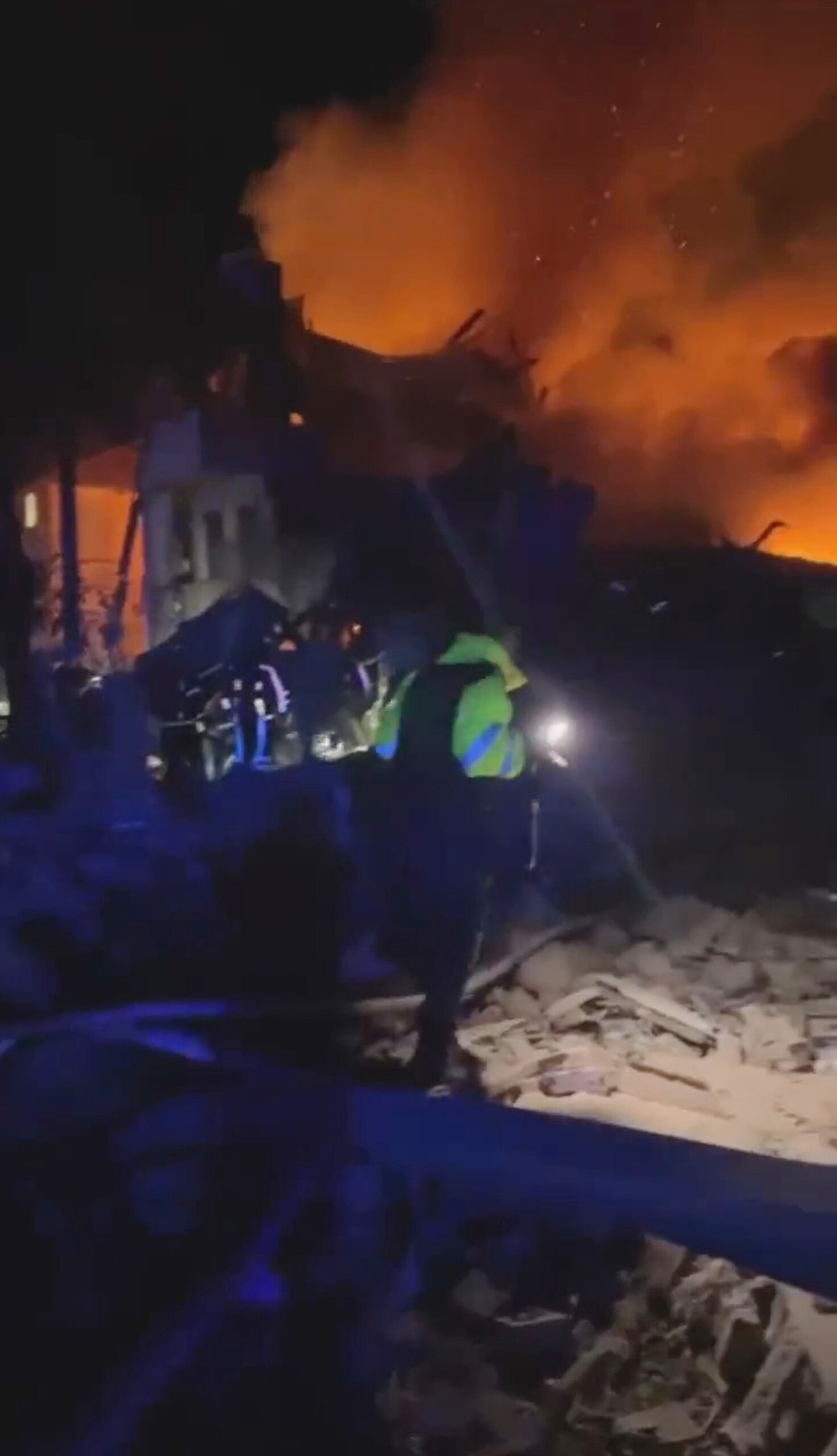 Picture shows smoke and rubble from the destroyed Hostel in Kharkiv in Ukraine, late night Wednesday, Aug. 17, 2022. According to the Ukrainian official authorities 7 people were killed and another 17 were injured by Russian Shelling of Kharkiv. (@V_Zelenskiy_official/Zenger)

Seven people are dead and at least 17 have been injured after a residential building in Kharkiv, Ukraine, was hit by Russian shelling last night.

Ukraine’s President, Volodymyr Zelensky has said that a block of apartments in the northeast of his country was “totally destroyed&mldr; We will not forgive, we will take revenge.”

The footage shows them battling fires and sifting through debris on the evening of Wednesday, August 17, after the residential neighborhood in Kharkiv was hit by Russian ordnance.

The footage was obtained from President Zelensky’s official Telegram account, along with a statement saying: “When you hear about Kharkiv’s Saltivka, it hurts again. Pain for all of Ukraine. Pain for Kharkiv.

“Rocket attack… On the dormitory… The building was completely destroyed. We are establishing the exact number of dead and wounded. A vile and cynical attack on civilians that has no justification and demonstrates the powerlessness of the aggressor. We will not forgive, we will take revenge.”

“In total, during the day, the rescuers made 31 operational departures, of which: for extinguishing fires — eight, including fires caused by military actions — six, five – for carrying out emergency and rescue operations, twelve – to provide assistance to the population, utility workers and the police, six – other departures.

“At night, the enemy fired rockets at the Saltiv, Kholodnohir, and Slobid areas of the city of Kharkiv, as well as the Krasnograd area of &ZeroWidthSpace;&ZeroWidthSpace;the region. As a result of the shelling, multi-story and private residential buildings, a dormitory and a cultural center were destroyed and damaged.

Ukraine’s emergency services added: “Also, in the city of Krasnograd, three residential buildings were destroyed and 12 buildings were damaged. According to preliminary data, two people died as a result of shelling. Three people, including one child, managed to be saved. There was no fire.

“In the Slobid district of Kharkiv, a four-story dormitory building and a tram depot building were partially destroyed. According to preliminary data, one person died. Eight people, including two children, were saved. There was no fire.

“During the day, pyrotechnics of the State Emergency Service eliminated 18 unexploded enemy munitions.

“We will endure. We believe that we are regaining our right! Everything will be Ukraine!”

Zenger News contacted the State Emergency Service of Ukraine for further comment, as well as the Russian Ministry of Defense, but had not received a reply at the time of writing.

«Previous Post
Lonely Divorcée Encourages Singletons To Enjoy Life»Next Post
The Biggest Gold Crucifix In The UK Is Expected To Fetch At Least $36,000 At Auction