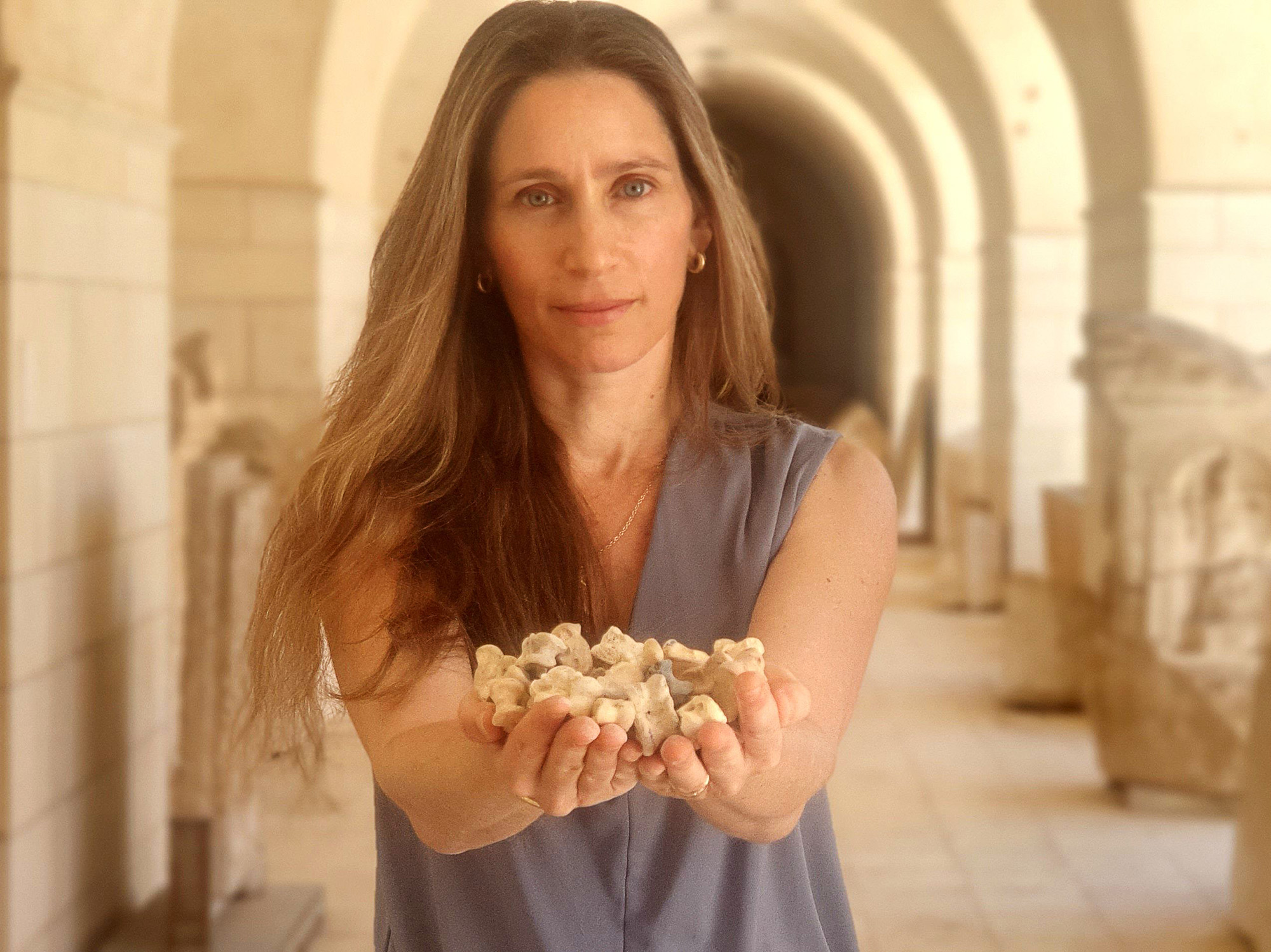 Dr. Lee Perry-Gal poses holding the gaming dice in an undated photo. A rare assemblage of knuckle bones for gaming and divination was discovered in the ancient city of Maresha. (Yoli Schwartz, Israel Antiquities Authority/Zenger)

Five hundred and thirty rare knuckle bones that were engraved with the names of gods and used for divination have been discovered in the ancient city of Maresha.

Known as ‘astragali’, the bones date back some 2,300 years to the Hellenistic period, which lasted from the death of Alexander the Great in 323 BC until the Roman conquest of Egypt in 30 BC.

The knuckles bones – which were used for playing games as well, often by women and children – were unearthed by Dr. Ian Stern from the Hebrew Union College in Jerusalem.

Dr. Stern found them in a large cave in the Maresha-Bet Guvrin National Park in southern Israel a few years ago but the findings have only been published recently, in the academic journal Levant, on May 3.

They offer a new look into life within the ancient city. The study was published under the title ‘Gaming and divination in the Hellenistic Levant: the case study of the astragalus assemblage from Maresha, Israel’ and authored by Lee Perry-Gal, Ian Stern and Adi Erlich.

Zenger News obtained a statement from the Israel Antiquities Authority that explained that the astragali – which were made out of the knuckle bones of cattle as well as goats and sheep – were similar to dice in the way that they were used. Some of the bones had also been shaved down, pierced and filled with lead so that they would fall better.

A large number of the knuckle bones bore the names of Greek gods and goddesses such as Hermes and Hera, as well as Nike, the goddess of victory, and Aphrodite, who represents fertility, love and beauty.

Other bones were engraved with game instructions and player roles such as, “robber”, “you are burnt” and “stop!”

Dr. Lee Perry-Gal, a zooarchaeologist at the Israel Antiquities Authority and research fellow at the University of Haifa, stated that the collection is unique due to the large number of inscriptions found as well as the conditions in which it was preserved.

She said: “The assemblage shows that in ancient times of distress, as today, people sought help from external factors, in magic and spells and in the world of the unknown.”

She also said: “In the past, men, and especially women, struggled with an environment of uncertainty, death, childbirth, and health issues, and tried to protect themselves with the help of magic.”

She added that children during the time were buried with the dice as they were believed to accompany them into the afterlife.

Dr. Perry-Gal added: “Since the astragali symbolize good luck, it was customary to inter them under the house threshold, in the hope that they will bring good luck and prosperity.”

The Director of the Israel Antiquities Authority, Eli Eskosido, said: “This fascinating research sheds light on the life and customs in the ancient world and reminds us that people are regular people all over the world. They dream and hope, and notwithstanding the harshness of daily life, they find time for playing and leisure.”

Dr. Perry-Gal went on to laud the ethnic diversity of the ancient Hellenistic city of Maresha.

She said: “Different populations and cultures lived side-by-side here as neighbors, all subordinate to the Hellenistic rule. There lived here Edomites, Phoenicians, Nabateans and Jews, and the different peoples and cultures influenced each other.”

Maresha is listed as a UNESCO world heritage site and was first excavated by British archaeologists from 1898 to 1900.

The majority of the objects from that excavation can be found in the Istanbul Archaeology Museums in Turkey, while the area is now protected as part of the Bet Guvrin-Maresha National Park.