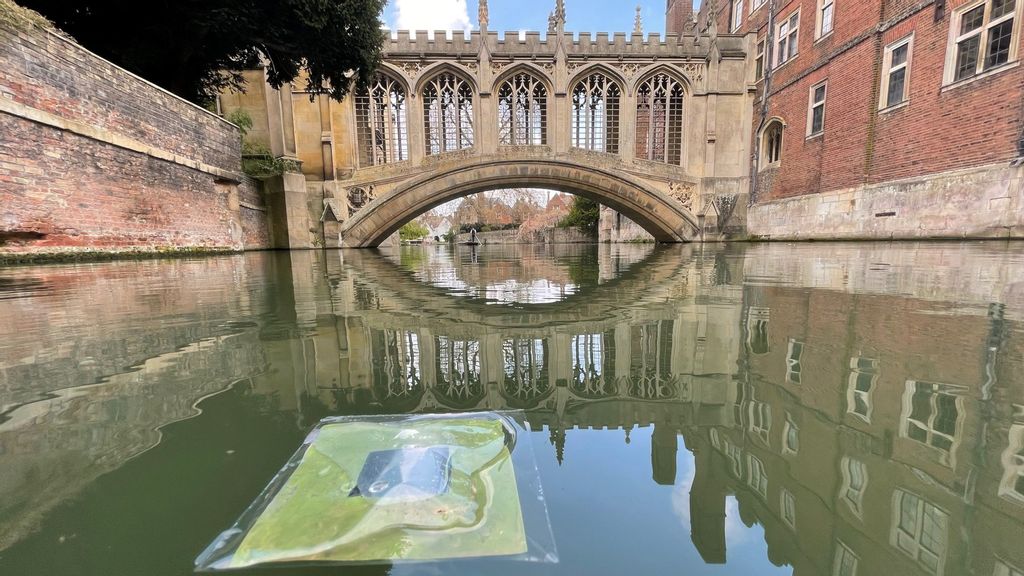 Miniaturized, floating artificial leaves that can turn sunlight and water into clean fuel that could one day be used to power cargo ships pictured in an undated photo. (SWNS/Zenger)

New miniaturized, floating artificial leaves that can turn sunlight and water into clean fuel could one day be used to power cargo ships.

The ultra-thin, flexible devices mimic photosynthesis – the process by which plants turn sunlight into food – and produce syngas, which is a mixture of hydrogen and carbon monoxide. Historically, it has been used as a substitute for gasoline.

It is the first time that clean fuel has been generated on water but the leaves are not currently able to produce syngas at a large enough scale to supplant diesel.

If scaled up, they could be used on polluted waterways, in ports, or even at sea and could produce clean fuel without taking up space on land.

While electricity from wind and solar can power households, businesses and some manufacturing, international freight shipping has proved much harder to decarbonize.

Around 80 percent of global trade is transported on diesel-powered cargo ships and the shipping industry accounts for 3 percent of all energy-related CO2 emissions globally, according to the International Transport Forum.

The researchers, at the University of Cambridge in England, have been working to address this and in 2019 created an artificial leaf that could produce syngas from sunlight, carbon dioxide and water, but it was too bulky to be used in industry.

Virgil Andrei of the University of Cambridge and co-lead author of the current paper said: “Artificial leaves could substantially lower the cost of sustainable fuel production, but since they’re both heavy and fragile, they’re difficult to produce at scale and transport.”

Professor Erwin Reisner, who led the research, added: “We wanted to see how far we can trim down the materials these devices use, while not affecting their performance.

“If we can trim the materials down far enough that they’re light enough to float, then it opens up whole new ways that these artificial leaves could be used.”

The team took inspiration from the electronics industry where miniaturization techniques produced revolutionary developments such as smartphones.

They downscaled the device by using thin films of the chemical compound metal oxide, a coating of materials known as perovskites and micro-meter thin, carbon-based layers that prevent water damage.

This meant they could create hand-held, flexible leaves which the researchers then tested on the River Cam and showed that despite their size, the leaves could split water into hydrogen and oxygen and reduce CO2 to syngas.

Andrei said: “This study demonstrates that artificial leaves are compatible with modern fabrication techniques, representing an early step towards the automation and up-scaling of solar fuel production.

“These leaves combine the advantages of most solar fuel technologies, as they achieve the low weight of powder suspensions and the high performance of wired systems.”

While additional improvements will need to be made before they are ready for commercial applications, the researchers say this development opens whole new avenues in their work.

Reisner added: “Many renewable energy technologies, including solar fuel technologies, can take up large amounts of space on land, so moving production to open water would mean that clean energy and land use aren’t competing with one another.

“In theory, you could roll up these devices and put them almost anywhere, in almost any country, which would also help with energy security.”

«Previous Post
The World Is A Volcano Eruption Away From Disaster, Researchers Warn»Next Post
Couple Sells Everything To Take Baby On World Tour