Massive Explosions As Russian Ammo Depot Is Destroyed In Crimea

The footage shows the ammunition depot exploding near the village of Azovske in the Dzhankoi Raion.
By Joseph Golder August 18, 2022
Facebook
Twitter
Linkedin
Email 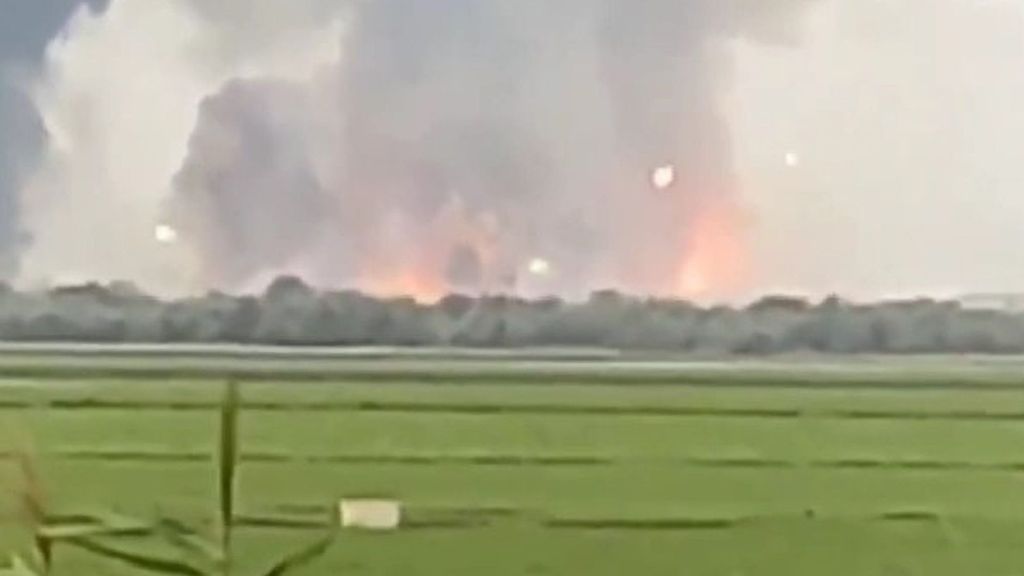 Fire and smoke in the air from the ammunition depot explosion in Crimea in peninsula in Eastern Europe on Tuesday Aug. 16, 2022. According to the head of the government of Crimea, Serhiy Aksyonov, two civilians were injured as a result of the detonation in the Dzhankoy district. (@ChernihivTCKtaSP/Zenger)

This footage shows massive explosions as a Russian ammunition depot was destroyed in Crimea the morning of August 16, with Russia blaming the incident on “sabotage”.

The footage was obtained from a number of sources including the Office of Strategic Communications (StratCom) of the Armed Forces of Ukraine, Ukraine’s Chernihiv Regional Territorial Center Of Recruitment And Social Support, as well as from Oleksiy Goncharenko, 41, a Ukrainian Member of Parliament.

The incident has also been confirmed by the Russian Ministry of Defense (MoD) who said that a fire caused the blasts in the Dzhankoi area, before later saying that the incident was the result of “sabotage”.

The footage shows the ammunition depot exploding near the village of Azovske in the Dzhankoi Raion, in north-eastern Crimea. Crimea is part of Ukraine but was illegally annexed by Russia in 2014.

A fire also reportedly broke out at a transformer station in the town of Dzhankoi, also in the Dzhankoi Raion.

Andrii Yermak, 50, the Head of the Office of the President of Ukraine, said that “operation ‘demilitarization'” in the “style of the Armed Forces of Ukraine will continue until the complete de-occupation of Ukrainian territories. Our soldiers are the best sponsors of a good mood. Crimea is Ukraine.”

Ukrainian MP Goncharenko shared the images and said: “Explosions in the village of Azovske, near Dzhankoi in Crimea! A warehouse with ammunition is on fire. Crimea returns to its home port.”

StratCom said: “According to preliminary information, there was an explosion in the village of Travneve in the Dzhankoi district of the temporarily occupied Crimea around 6:15 a.m., and now a Russian ammunition depot is detonating. They also reported a fire at the substation. Evacuation of the population began due to the detonation of ammunition after the explosion.”

The Russian MoD said: “The detonation occurred at a site for temporary storage of ammunition near the village of Mayskoye, Dzhankoi district, on Tuesday morning. The Ministry of Defense reported that as a result of a fire on the territory of a bunded site of one of the military units, supplies detonated. According to preliminary information, two people were injured, one of them was hospitalized.”

The Russian MoD also said: “After the emergency, a five-kilometer [3-mile] zone was cordoned off, residents of the villages of Azovske and Maiskoye, Dzhankoi district, were temporarily placed in schools in the villages of Kondratyevo, Tabachnoye, and Pobednoe. Emergency services and police are on the scene.”

This was also relayed by Russian state media, including RIA Novosti.

The Russian MoD later blamed the explosion at the “military storage facility” on “sabotage”.