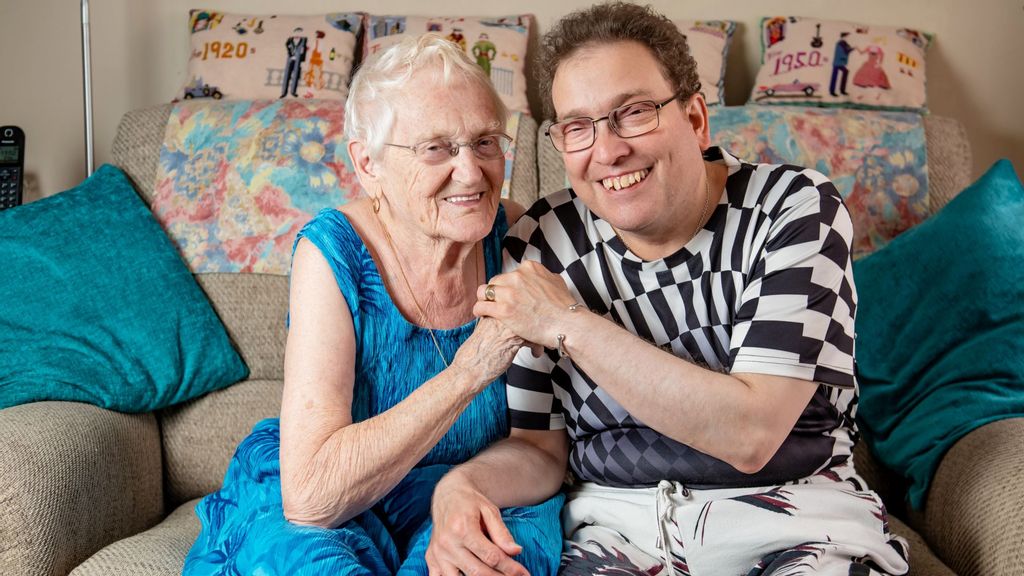 Edna and Simon at their home in Weston-super-mare, in England, in the U.K. in an undated photo. The couple with a 40-year age gap who have defied all the odds and have celebrated their 15-year wedding anniversary. (Jon Mills, SWNS/Zenger)

Meet the couple with a 40 year age gap who have defied all the odds to celebrate their 17th wedding anniversary.

They celebrated their 17th wedding anniversary by dining at a local fish and chips restaurant, and exchanged romantic gifts.

They said they owe their successful marriage to treating each other with affection and going out on adventures every day.

The pair say they have lasted so long together they no longer get strange looks and comments in their local community, and say everyone accepts their relationship.

Simon said: “We still go out together and walk hand-in-hand on our wheelers because we both struggle with out mobility.

“We have actually inspired other people in age-gap relationships to take the next step and get married.

“Our friends and acquaintances have always been happy for us but of course we just ignore any weird looks and comments.

“Love is love and everyone should ignore what anyone else says.

The grandmother-of-four bought Simon a torque bracelet and Simon got Edna some earrings with crystals.

Edna, a retired engineer, said: “We are still very much in love and keep our relationship alive through our little adventures.”

The age-gap lovers fell in love at first sight at a concert 18 years ago and haven’t been able to keep their hands off each other ever since.

Edna’s son is 57 and her grandchildren are older than Simon but nobody takes any notice.

Simon is a retired organist but continues to woo Edna with his musical prowess.

Before moving in together, Simon who had never had a girlfriend before, lived in Birmingham, in England’s West Midlands region.

They had to be long-distance lovers but couldn’t bare to be apart so moved in together after a few weeks later.

Simon’s family took some time to adjust to the age gap but as soon as they saw how happy their son was, they didn’t care, he said.

Edna’s family have always been supportive and watched the couple wed on July 8, 2005.

Edna said: “My daughter made our wedding cake and my son gave me away.

“He said at the wedding reception: ‘I’ve been wanting to give my mother away all my life and this is the day for it.’

“My son is 57. My grandchildren are more the age that Simon is, but nobody takes any notice.

“The people where we live are very warm and friendly – they’re not very judgmental, not that it’s anyone’s business.”

The pair never shy away from public displays of affection and find it hard to keep their hands off each other.

Edna said: “When you love each other as much as Simon and I, it’s reasonably impossible to keep your hands off each other – let alone other bits of your anatomy.

“We often have a little kiss in the supermarket queue or pinch each other’s bums.

“It’s really wonderful that we can express our love publicly – not for other people, but for ourselves.

“It’s very rare to see a couple of any age giving each other a loving peck or showing their affection.”