"We were so prepped for it, everyone took it seriously, and it’s a fair trek up there and you have to respect it."
By Simona Kitanovska August 18, 2022
Facebook
Twitter
Linkedin
Email 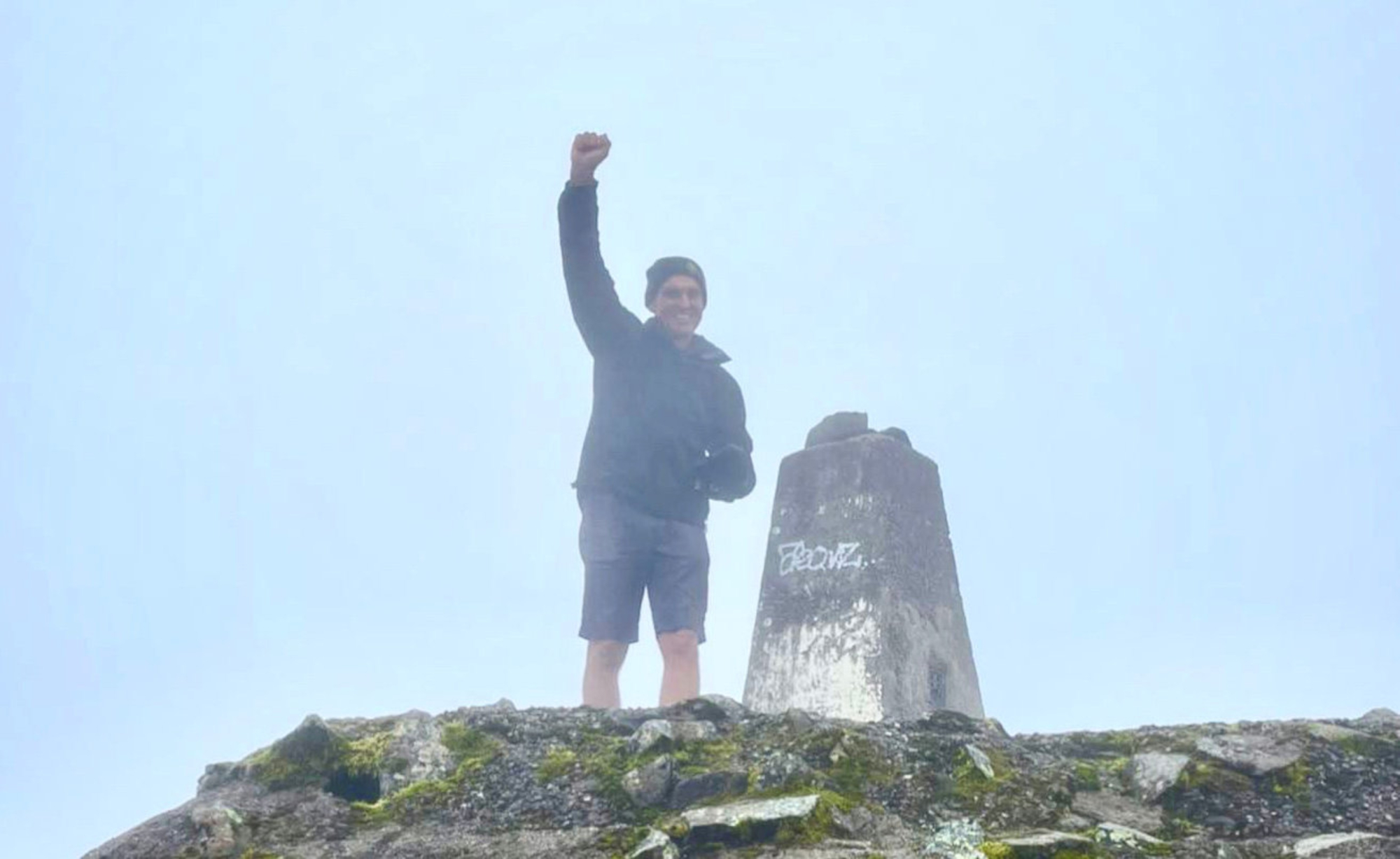 Trevor Botwood at the top of Ben Nevis, the highest mountain in Scotland, the United Kingdom, on August 6, 2022. Botwood had suffered a heart attack while climbing Ben Nevis in 2020 and has now finally conquered the peak. (Matthew Newby, SWNS/Zenger)

A dad who suffered a heart attack while climbing Scotland’s highest peak has finally conquered the peak – alongside the woman who saved his life on the first attempt.

Trevor Botwood was climbing Ben Nevis — which is also the highest mountain in the United Kingdom- with his sister Irene Metcalfe in August 2020.

But roughly halfway up he collapsed due to a heart attack – just when physiotherapist Courtney Ferguson was descending.

She performed CPR until emergency workers, who arrived by helicopter, took over.

Bricklayer Botwood, 63, was then rushed to hospital, where he was fitted with three stents.

Now, two years on and after making a full recovery, he has finally reached the summit of the peak, whose Scots Gaelic name ‘Beinn Nibheis’ may mean ‘cloudy mountain.’

And he was joined on the climb by Ferguson – with the pair sharing a well-earned pint of brew at the bottom.

Botwood, from Bramley, Leeds, in northern England, said: “I always said I’m going back up that mountain one day.

“With the whole COVID thing, it put everything on hold, but it was a good thing really because last year I wouldn’t have been ready, but this year I was.

“I was absolutely elated, I was confident I would do it.

“When I was walking up, I thought I’ve nailed this but I always had confidence in my fitness, because we’d done walks building up to it. I go out walking every Saturday.

“We were so prepped for it, everyone took it seriously, and it’s a fair trek up there and you have to respect it. I respect that mountain.”

But he suffered a heart attack during the ascent.

Luckily, Ferguson was on her way down and passed Botwood and Metcalfe as he was suffering.

She performed CPR – the first time she had ever had to use the skill in a real situation – and tended to Trevor until paramedics arrived.

Botwood’s daughter Beth Hall, 32, explained: “He had a cut on his face were he had fallen, his eyes were open and he had no pulse.

“So without hesitation [Courtney] performed CPR while her sister called an ambulance.

“As they were so far up, mountain rescue came and because he was high up they couldn’t land so he was airlifted into the helicopter.

“They got him to hospital and my auntie had to walk back down the mountain.

“Some passers-by accompanied her and she had to go back to the lodge and tell my mom they needed to get to the hospital.

“A police officer met her at the bottom of the mountain and arranged a taxi for my mom, auntie and uncle to get to the hospital.

“The whole time they didn’t know if he had survived or not.”

Thankfully, Botwood did survive – and made a speedy recovery.

He then vowed to tackle the mountain again – and finally reached the peak alongside Ferguson and others on August 6, 2022.

Hall, who also climbed the peak, continued: “Dad had built himself back up and was keen to get back to things but if it was up to my mum she would have made him take early retirement.

“It’s been two years since his heart attack and he always had the intention to do it again.

“He said, ‘I’m getting back up there and finishing that mountain, it’s not defeating me’.

“On the second attempt, I was anxious for my dad – I knew he would be fine because he’s fit but there’s always that anxiety in the back of your mind.

“It was bitterly cold when we got up there and the peak was in the clouds so we couldn’t really see anything.

“We stayed for ten minutes to get some pictures and I burst into tears.

“Dad had promised Courtney a pint at the end so we stopped in the pub at the bottom and I presented dad with a little certificate and medal.”

Botwood said: “It is a mental thing, overcoming the barrier to get back up there – I didn’t think I had a problem with fitness, but it was a mental barrier.

“I wanted to give something back, we’re going to make donations to QE hospital, the other will go to Leeds General Infirmary, and then to mountain rescue.

“I wasn’t even nervous before I went back up, I did two of the three peaks in the Yorkshire Dales the other week, I’ve always done walking.

“I knew I could do it this time – I’d recommend it to anyone, it’s so good for your mental health going for a walk.

“It’s so important to know CPR, Courtney knew it but it was the first time she’d ever used it, and she did brilliant.

“It was because of her that I came back round, if she hadn’t been there who knows what might have happened.

“You never know when you might need it, but for the one time you do, it’s worth learning it.”