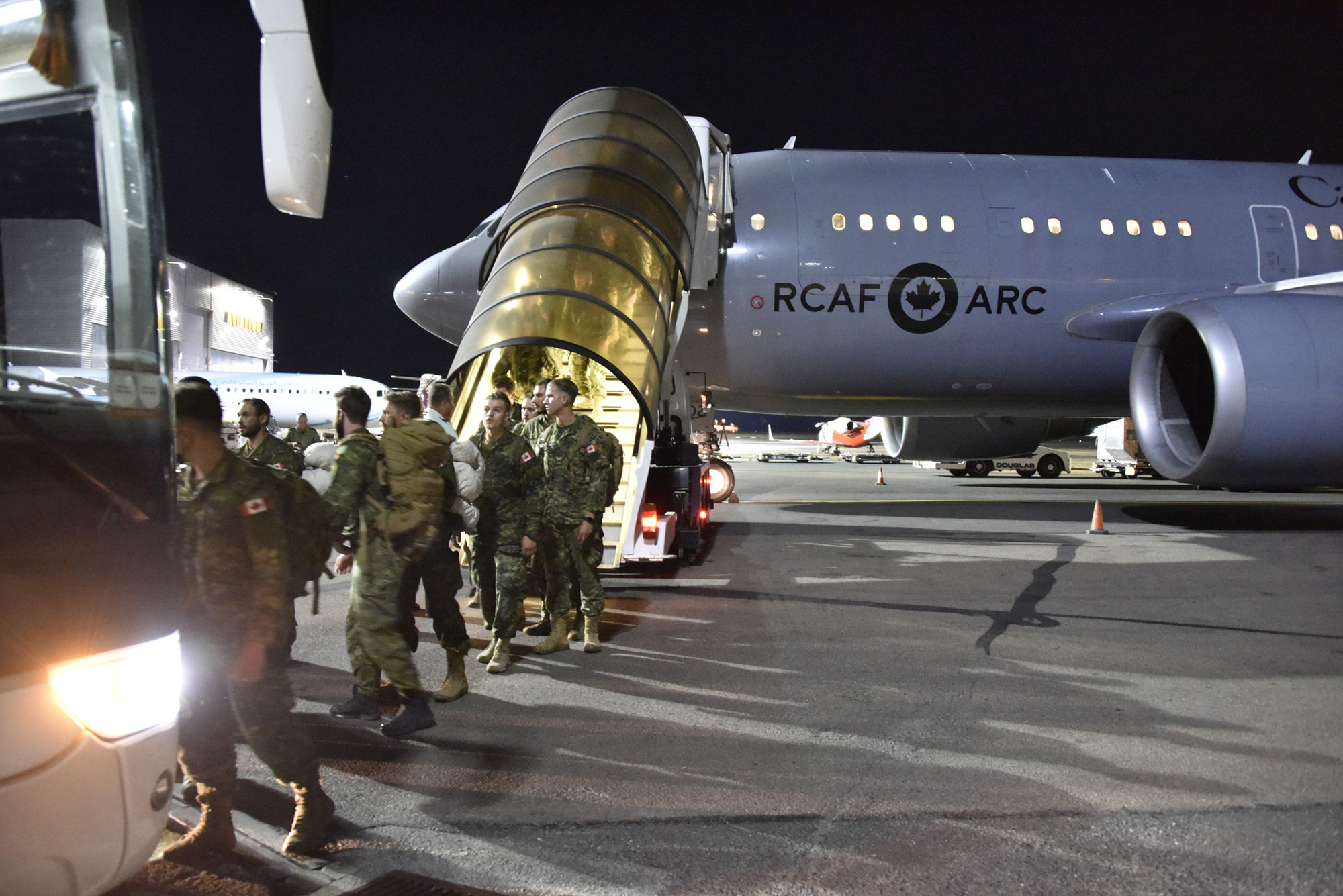 The training contingent from the 3rd Battalion Princess Patricia's Canadian Light Infantry goes off the passenger ladder in Edmonton, Great Britain, Friday, Aug.12, 2022. They came to participate in Operation UNIFIER (UK) which was launched in 2015 at the request of the Ukrainian government, and was expanded and extended until March 2025. (@CAFOperations/Zenger)

These images show Canadian military instructors arriving in the United Kingdom to help train Ukrainian troops to fight the Russians.

The training contingent from the 3rd Battalion of the Princess Patricia’s Canadian Light Infantry can be seen in the images moments after landing in the town of Edmonton, in north London, England, on Friday, August 12.

“Canada’s contribution to the training of Security Forces of Ukraine aims to promote peace and security in Ukraine through military capability and capacity building, professionalization and materiel donation.”

And the General Staff of the Armed Forces of Ukraine said in a statement obtained on Tuesday, August 16: “The Minister of National Defense, the Honorable Anita Anand, announced August 4 that Canada has authorized the deployment of Canadian Armed Forces personnel to train new recruits from the Armed Forces of Ukraine, as they seek to increase the size of their ground forces in the face of Russia’s ongoing unprovoked, unjustifiable, and illegal invasion.

“Under Operation UNIFIER, Canada’s military training and capacity building mission in Ukraine, the [Canadian Armed Forces] will deploy up to 225 personnel to the United Kingdom, the majority of whom will work as trainers, supported by a command and control element, for an initial deployment of approximately four months.

“The first Canadian-led courses will take place at a military base located in South East England, and will teach a flexible curriculum focused on individual skills required for frontline combat, including weapons handling, battlefield first aid, fieldcraft, patrol tactics and the Law of Armed Conflict.

“Operation UNIFIER was launched in 2015 at the request of the Ukrainian government, and early this year, was expanded and extended until March 2025.

“Aspects of the mission were temporarily paused following the February 2022 full-scale invasion of Ukraine, with a commitment to resume training when and where conditions permitted.

“Since February 2022, Canada has committed or delivered $626 million in military assistance to Ukraine, including M777 howitzer artillery guns with replacement barrels and compatible ammunition, as well as specialized drone cameras and Armored Combat Support Vehicles, and associated training.”

General Wayne Eyre, Chief of the Canadian Defense Staff, is quoted in the statement as saying: “Despite the heinous Russian invasion of Ukraine, Operation UNIFIER has continued, and this new aspect is only the latest in a series of activities by Canada that has trained well over 33,000 members of the Armed Forces of Ukraine since 2015. When we paused training in Ukraine this past winter, we said clearly that we would resume the training whenever and wherever the opportunity arose.”

And Anita Anand, Canadian Minister of National Defense, was quoted as saying: “We made good on the promise providing training on Canadian donated artillery and munitions in third nations, which continues. By working with the United Kingdom, we will continue to make good on that promise. Canada salutes the courage and bravery of the Armed Forces of Ukraine, and we will continue to help empower them with the skills that they need to defend their nation’s freedom and independence.”

The statement continued: “Canada is known for the quality of training it provides to other nations. This training, as we have seen, results in strategic effect of great value. From recent engagements such as the Ukraine Defense Contact Group, it is abundantly clear that training is a critical component to sustaining Ukraine’s capacity to defend itself in the short to long term.

“Building on the Canadian Armed Forces’ already close relationship with the Armed Forces of Ukraine, Canada is proud to work alongside like-minded nations such as the United Kingdom to further support their training needs.”

British Defense Secretary Ben Wallace is quoted as saying: “I am delighted that the Canadian Armed Forces will be joining the growing international effort to support the training of Ukrainian soldiers in the U.K. Canada’s expertise will provide a further boost to the program and ensure that the Ukrainian men and women, coming to the U.K. to train to defend their country, will get a wide pool of experience and skills from both U.K. forces and our international partners.”

The Canadian Army previously said on the evening of Friday, August 12: “Today, approximately 90 soldiers mainly from 3rd Battalion, Princess Patricia’s Canadian Light Infantry, departed Edmonton for the United Kingdom, where they will deliver combat training to Ukrainian soldiers as part of Operation UNIFIER.

“This training will include weapons handling, battlefield first aid, fieldcraft, patrol tactics and the Law of Armed Conflict, and will aim to help the Armed Forces of Ukraine to defend their homeland against Russia’s ongoing and illegal invasion.”

Zenger News contacted the Canadian Armed Forces for further comment, as well as the Ukrainian and Russian Ministries of Defense, but had not received a reply at the time of writing.