Marine biologists are concerned they may not be able to preserve what is left of the historically significant wreckage.
By Simona Kitanovska August 18, 2022
Facebook
Twitter
Linkedin
Email 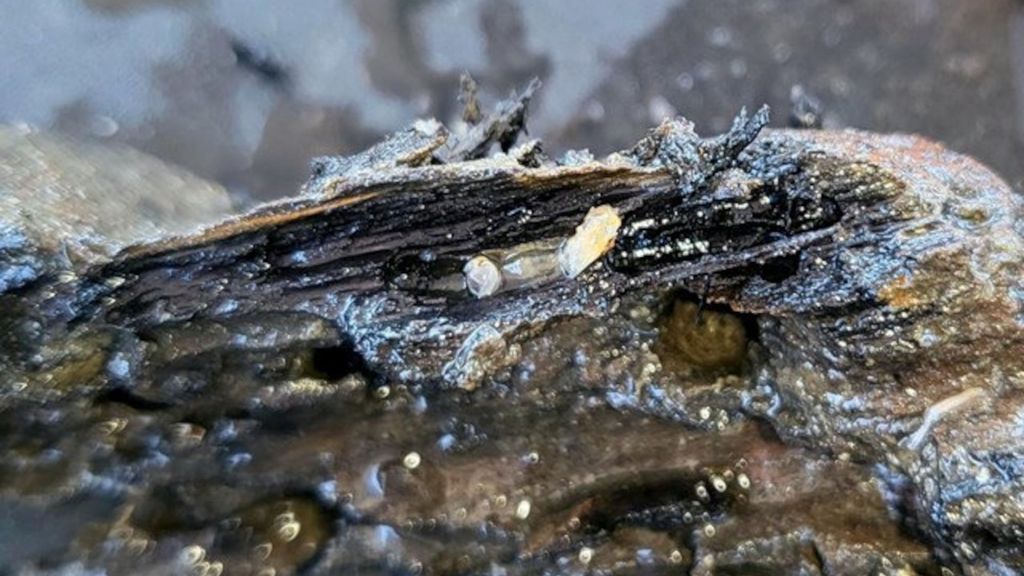 Shipworms found in the center of the timber that was salvaged from the wreck site off Rhode Island, which was discovered in February, 2022. The ship was used for one of the world's first scientific voyages before it sank in 1778. (Reuben Shipway,University of Plymouth,SWNS/Zenger)

A shipwreck of Captain James Cook’s HMS Endeavour which sank in 1778 is being eaten by crustaceans, experts have found.

The ship’s timber frame, located off the coast of Rhode Island, is being destroyed by two species called shipworms and gribbles – otherwise known as “termites of the ocean.”

James Cook (1728-1779) led three scientific voyages for the British Navy before finally being killed by natives in Hawaii after he tried to abduct a local chieftain. Cook commanded the Endeavour on his first voyage from 1768 to 1771,

Marine biologists are concerned they may not be able to preserve what is left of the historically significant wreckage.

They say anyone who cared about the wreck should come up with the resources and funding to protect it.

The Endeavour, found in February this year, was used for one of the world’s first scientific voyages before it was scuttled in 1778.

Reuben Shipway, lecturer in marine biology at the University of Plymouth in England, dived down to the submerged wreck this month to see what was left of the ship – roughly 15 percent of its original structure.

After analyzing one of the salvaged timbers at Harvard University, Shipway was able to identify the particular species present at the wreck site – Teredo navalis, commonly called the naval shipworm.

The shipworms, actually a worm-like mollusc, infiltrate and eat through wood.

Shipway, who first became involved with work on the wreck early this year, said: “The Endeavour was used for one of the world’s earliest scientific voyages, and is responsible for amassing information that has shaped human history.

“Its name has since been used for pioneering voyages of space discovery.

“If this wreck was on land, more would be done to preserve it but because it is underwater I believe there is a real danger of it being out of sight and out of mind.

“The majority of the vessel has been destroyed over the past two centuries and more.

“If it is left, the shipworms will continue to eat away at its structure and we could be left with little – or nothing – to preserve.”

After seeing international speculation about the vessel’s identity, Shipway contacted the Rhode Island Marine Archaeology Project, which has a permit to dive at the site and has conducted studies on many other wrecks located nearby.

He was finally able to make the trip to the United States this August to examine the wreck – and saw first-hand the signs of shipworm damage.

On the outside of the wreck’s timbers, submerged around 40 feet below the ocean surface, Shipway saw small holes similar to that commonly seen it timbers affected by woodworm.

Beneath that, the worms have turned the wooden structure into something similar to honeycomb which has reduced its rigidity and, over time, would cause it to collapse.

Shipway argues the wreck’s fragile nature means that preserving what is left is not as easy as simply lifting it from the seabed.

He added: “As long as the timbers are exposed in the ocean, the shipworms will continue to eat away at them.

“However, when they are submerged in sediment the worms cannot access them, so submerging more of the wreck could offer a short-term solution.

“That would only last until the region was hit by a storm and the sediments shifted, however, but it could give those seeking to preserve it time to develop a long-term plan.”

HMS Endeavour launched from Plymouth, England, in 1768 on a three-year global voyage of discovery.

She sailed the South Pacific as Cook conducted scientific research and charted the coast of New Zealand and Australia’s eastern coastline before claiming the land for Great Britain.

In 1778 British forces scuttled it in Newport Harbor, during the American War of Independence. It’s one of several shipwrecks in the area.

Relics of the ship, including an anchor and several cannon, are preserved in various museums across the world.