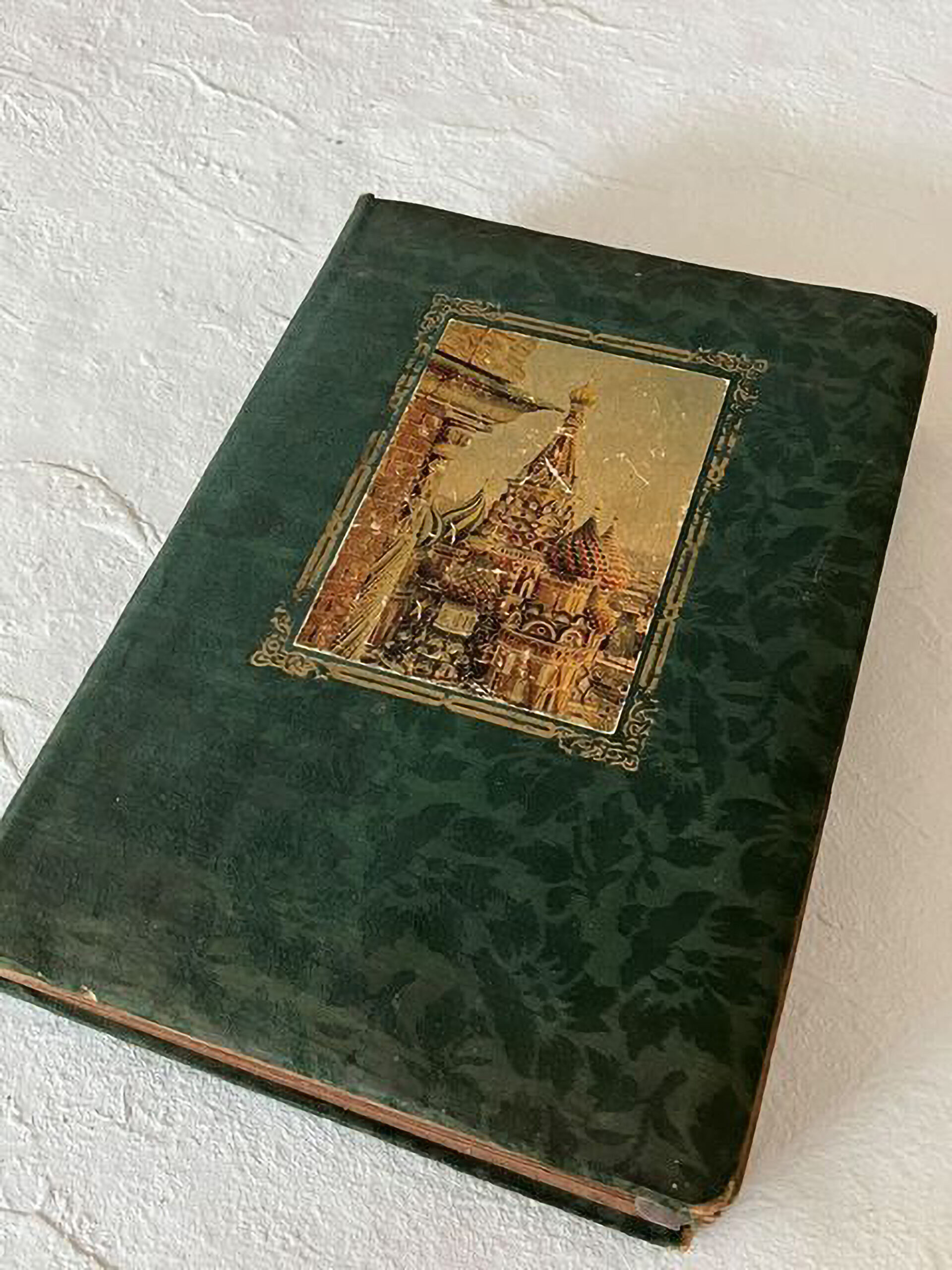 The cover of the Ukrainian photo album that was obtained by Chelsey Brown, 29, from New York, in 2022, undated photo. Chelsey Brown spent weeks trying to track down the descendants of the people in the album. (@citychicdecor/Zenger)

An American woman who finds lost heirlooms at flea markets in New York has tracked down a photo album’s rightful owners to a family in war-torn Ukraine and given them a “sliver of hope”.

And the grandson has said that he is grateful to her and her relatives for helping his family during tough times.

Chelsey Brown, from New York, is a 29-year-old interior decorator who researches genealogy as a hobby, finding lost heirlooms at flea markets and antique shops and then returning them to their families.

The New Yorker uploads videos revealing the histories behind the objects to her TikTok account (@chelseyibrown) and has almost 150,000 followers.

Chelsey told Zenger News in an exclusive interview that she found this photo album online. She said: “I thrifted it from an online vendor.” She explained that she eventually tracked down the family to which it belonged and has made plans to meet in person.

She told Zenger News: “The family really wants the album back but there’s virtually no way to send it right now because of the war, so we are planning on meeting in person.”

Chelsey said that the family wrote to her saying: “So what I wanted to say is thank you. From the bottom of my heart. Thank you for being an exception to the rule, for giving me if but a sliver of hope, of faith in humanity. God knows, we’re pretty short on both these days.”

Chelsey added: “I still communicate with the family on a weekly basis.”

She said: “Their communications with me are nothing but overwhelmingly thankful. I’ve been in weekly contact with the grandson, who happens to be my age! I feel as if I have a friend half a world away. We have similar hobbies and love the same books.

“After over a month of researching them, I felt a deep connection with them, and that’s probably because of how long I spent studying their ancestors.

“I have sent the family funds, and had friends, family, and my social following send direct support to them as well. Although this album is the first heirloom I physically can’t return (yet), it was the key for me to find this family, and create the connection I currently have with them.”

Zenger News contacted Ivan Makovetskyi – the grandson – who was an English teacher before the Russian invasion of Ukraine, and he said that the photo album – which he thinks dates back to some time between 1940 and 1960 – shows his grandfather and his dad when he was just a child.

Ivan, who said he now works for a humanitarian NGO, believes the album was either lost when relatives in Zaporizhia, in south-eastern Ukraine, moved house or it was stolen.

Ivan said times are hard and “we struggle to get enough for food each month”. He said he would “love to” meet up with Chelsey, so she can return the family heirloom, but at the moment, with the war and trying to make ends meet, this is currently impossible.

He also said: “I would love to but I find that hard to imagine. Going to the U.S. is incredibly difficult for a citizen of Ukraine, all the checks, visas and bureaucracy, both on our side and the side of the U.S., make it very hard to happen.”

He added: “I assume it would be much easier for Chelsey to come here, instead of me going there.”

Ivan, who lives in the city of Dnipro, in central Ukraine, said that Chelsey had managed to track down his mother on Facebook, but she does not speak English, so Ivan took over the exchanges.

While he is delighted about Chelsey finding the photo album, he is also interested in looking to the future and not dwelling on the country’s communist past.

He said: “The upbringing of my parents left them severely traumatized, to a point where they would waste their entire lives trying to prove they are different from their respective parents, and that is saying something about the way they themselves were treated while growing up, which was commonplace and considered acceptable by the society at that time. The traumatic past of communist reality, I guess.”

Ivan explained: “My family, as it is today, was formed in 1990-1991, when my parents met. I was born in 1992, and about that time the USSR collapsed, and we ended up in Ukraine, which was separated from the rest of Russia. You could say I was born in independent Ukraine and I never knew the USSR reality, and that would be true.

“One of the first things my parents did was to sever the ties with the rest of our relatives – my father always was a firm believer in honest work, and the 90’s here were a criminal paradise. Basically, all of the communal property suddenly became up for grabs, so called ‘privatization’.

“Of course it was survival of the fittest, the best property thieves, legal pencil pushers and bean-counting bureaucrats gave rise to a caste system based on corruption. So most of our relatives either went down, sinking in debts and poverty, and my parents were afraid they would drag us down with them, or went up – by becoming good at what the era demanded, which was a criminal set of skills and way of thinking.

“My father would have none of that, and instead opted for labor – he would be gone for days, working on his projects, trying to earn some cash to support us; first 10 years of my life my mother did not work, only performing housekeeping duties, but later on she had to help my father more and more, which culminated in 1999-2005, when my father had to close the business.”

Ivan explained that the business had just stopped making money and they had to sell their apartment because of huge debts and both his parents went to work at day jobs.

Ukraine’s uneasy transformation after the collapse of communism led to some people choosing criminality as an easy option while others toiled hard to put food on the table, with Ivan saying: “Moving on from there, it is easy to see why we severed the ties with our relatives – I have trouble thinking of any of my relatives who have not engaged in some sort of criminal activity.

“Even my cousin decided to steal my grandfather’s collection of stamps and jewelry the day after he died – when the house was in mourning and no sane person would even think of rummaging through his stuff. I can’t look her in the face ever since I discovered that, and she is not too enthusiastic about contacting our family either. The dislike is mutual.”

Ivan said that he had talked to some of his relatives about the photo album being found. But he added that food security and medicine were their primary concerns these days.

Ivan added: “My parents were more impressed that people from the U.S. would be willing to help complete strangers, like us, just out of the kindness of their hearts. At that time my dad just came back from hospital, diagnosed with ‘possible cancer’ due to constantly bleeding tumors.

“They could not confirm it with a biopsy, because of his elevated blood pressure, but the blood had no cancer markers; yet the doctor said that, [and I] quote ‘the bleeding means it’s 95 percent [sure that it is] cancer’.

“My mom was so scared at the time, and me and my parents had lost their jobs because of the war, which started this year – so when Chelsey heard of our predicament and helped us financially — they had recently opened PayPal for Ukraine back then — that was a shock.”

He added: “And not only Chelsey — she told her friends, they also sent some money our way, her father did as well, and he introduced me to his friend, Alan Crafton from Florida and his lovely wife Linda, with whom we have been chatting for quite a while now, as it turned out we a few things in common and we really enjoyed talking to each other.”

Ivan, who currently works for an NGO called the INTERSOS Humanitarian Organization, said that his dad was in hospital but that he had come home while he takes time to think about whether or not he should have surgery to remove the tumors. Ivan said the surgery would be minimally invasive but that it would still come with risks.

INTERSOS is a humanitarian organization that helps the victims of armed conflicts and natural disasters.

Ivan, who also cares for his grandmother who has Alzheimer’s and his mom who has hip problems, said the “way strangers from across the ocean treated us stands in stark contrast to the rot that has been present locally for decades, both in society in general – and reflected in the familial relationships as well.

“As it stands, I would rather trust people from the democratic West, the U.S. included, rather than anyone around here. Over the years we have seen nothing but proliferation of misery here, deceit and schemes, corruption at every level – and the best things in our lives always came from the West – that also includes my current job, as I am working for a humanitarian NGO; and that is the only job in my life where I felt and feel appreciated and duly compensated for my time and my work.”

Ivan mused at his mother refusing to see a doctor about her hips, half-jokingly quoting her as saying: “Who is going to take care of you all, if I am in the hospital?”

He added: “So there it is, I have three cripples I am taking care of, with me being the only one actively working and bringing in funds, as well as doing all of the leg work.”

Ivan paints a dark picture of Ukrainian society, saying: “Don’t let the media fool you – successful Ukrainians do exist, but it is a severe case of selective reporting. For every story of success, there are a thousand stories of misery and poverty, sickness and debts, unjust sentences and violations of basic human rights, which remain in the dark, untold.

“I am sorry for a rather grim outlook, but hopefully, the good things I had to say about Chelsey and the folk she gathered [can] help us keep this from being too depressing.”

He said that he was very grateful to Chelsey and to her relatives for donating some funds, adding that they had sent about $900, “which were mostly spent as emergency war relief funds”.

He said that they still had some of that money left over and that he and his family were trying “to spend them as economically as possible to achieve self-sustaining status.” Ivan can receive funds via PayPal at [email protected].