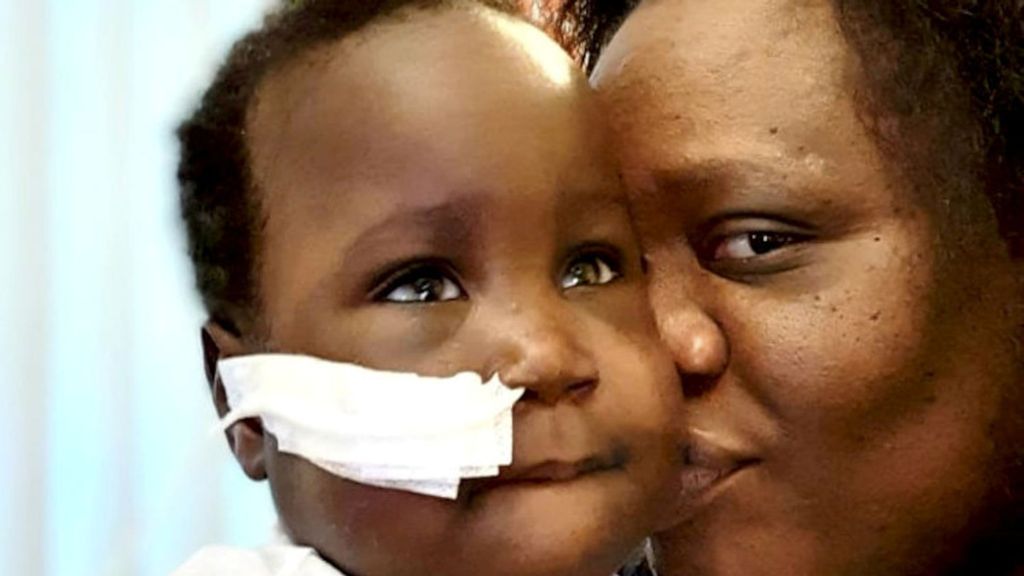 Baby boy Nathan Browne and his mom Joy pose in an undated photo. Nathan's mom is raising $14k to adapt the house so the poor two-year-old who has never left the hospital can finally come home. (Joy Browne, SWNS/Zenger)

A mother is raising over $14,000 to adapt her residence so that her sickly two-year-old who has never left hospital can finally come home.

Nathan, as he is known by his family, has a highly complex cardiac history and the Brownes have been living in hospital housing since his birth.

The family-of-five from Farnworth, Bolton, in northern England, are now desperate to get their baby home for the first time in 33 months before his third birthday this October.

But they need to raise 12,000 British pounds (approximately $14,000) to make their new house accessible for Nathan’s medical needs.

Browne, also mother to eleven-year-old twins, said: “We haven’t been home in almost three years, and what we have is not even enough to look after us at the moment.

“I just want my baby back, Nathan has been on ventilation since the first day he came into the world.

“It’s been the most difficult time of our lives but there is hope – as long as we can raise the money to get him back to live in comfort.”

Nathan was born by emergency cesarean section, with four major heart problems, his bowel and liver outside his umbilical cord, and a skin condition called exomphalos.

He had a hole in the upper and lower heart chambers, pulmonary stenosis – constricting blood flow from the right ventricle to the pulmonary artery – and a double-outlet right ventricle, where two large blood vessels do not connect to the heart normally.

The mother-of-three, originally from Bolton, England, explained: “As soon as Nathan was born, we discovered he all these issues wrong with his heart and all his life he has had difficulty breathing so has been on a ventilator ever since.”

When Nathan was born, his family moved from their home in Farnworth into Royal Manchester children’s hospital accommodation, Ronald McDonald House, to be closer to him.

The poor boy has endured 11 operations over 33 months, including his most recent open heart surgery in November 2021.

But since this critical operation at Great Ormond Street Hospital, Browne says her boy has now been taken off ventilation for three hours a day and is showing development for the first time in years.

Browne said: “They were able to fix his heart but he still needs care and support – the plan now is to see how best they can wean him off ventilation, and doctors are hoping to increase Nathan’s time breathing on his own more and more.

“The doctors say he is making promising progress and that we will be able to take him back home soon.

“We have been offered another home in Atherton, as our home back in Farnworth is not fit for Nathan – it is damp, has leaking and mold.

“But this new house unfortunately still needs a lot of work to give Nathan a place that is both liveable and comfortable.”

Nathan’s father, Patrick Browne, 50, works as a housing and wellbeing assistant, but has been unable to work full time because he has been caring for his family.

Browne says that major work needs to be done to the new house, including making the garden adaptable alongside new flooring, a new kitchen, and purchasing appliances for Nathan’s room like a bed and special equipment.

The dining room has already been converted into a downstairs room for Nathan – to fit all his medical apparatus.

Browne said: “I am just seeing what money I can raise for our family – I just really want to go home and see what Nathan and my twins need, we have been stuck in hospital for such a long time.

“We have managed this on our own, believing God every day for the better and [National Health Service] professionals have been doing their best for Nathan for 33 months.

“But once we can fix the house, it will give us a chance at normal again.”