The images were obtained from the Operational-Tactical Group 'North' of the Ukrainian Armed forces on Monday, August 15.
By Joseph Golder August 17, 2022
Facebook
Twitter
Linkedin
Email 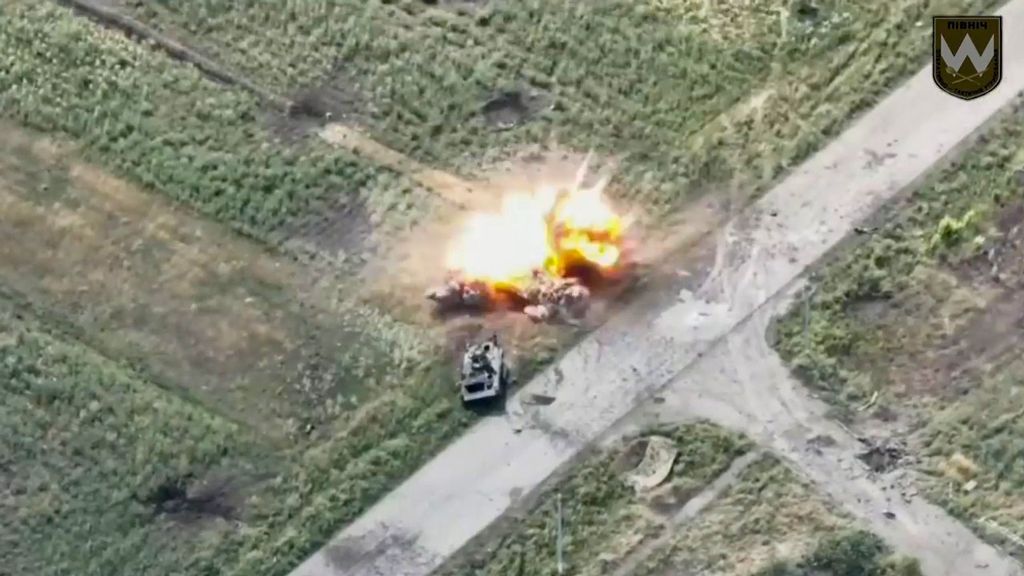 Russian BMP explodes after it ran over an anti-tank mine in the Donetsk Oblast in Ukraine in undated footage. Operational command Pivnich is an operational unit of the Ground Forces of the Armed Forces of Ukraine in the northern part of Ukraine on the territory of 6 oblasts and the city of Kyiv. (@otupivnich/Zenger)

This footage reportedly shows a Russian BMP armored vehicle driving over an anti-tank mine in Ukraine’s Donbas region before its crew abandon the vehicle and flee for their lives.

The video shows the Russian BMP – a type of infantry fighting vehicle – driving down a road at speed before it tries to drive into a field between two other BMPs that had already been disabled.

People who appear to be Russian soldiers can be seen to the right of the vehicle already running through the field, apparently fleeing.

Suddenly, the BMP reportedly hits an anti-tank mine, causing a large explosion, with smoke rising into the air.

The BMP immediately comes to a stop as a dozen Russian soldiers quickly leave the vehicle and scamper away as the footage ends.

The images were obtained from the Operational-Tactical Group ‘North’ of the Ukrainian Armed forces on Monday, August 15, along with a statement saying: “Another successful operation by our soldiers in Donbas! The ‘demilitarization’ of the occupiers continues successfully! Believe in your defenders! Victory is ours!”

Operational-Tactical Groups are typically made up of four battalions, according to the Ukrainian military. Battalions can often include up to 1,000 soldiers each.

Zenger News contacted the Operational-Tactical Group ‘North’ for further comment, as well as the Russian Ministry of Defense, but had not received a reply at the time of writing.