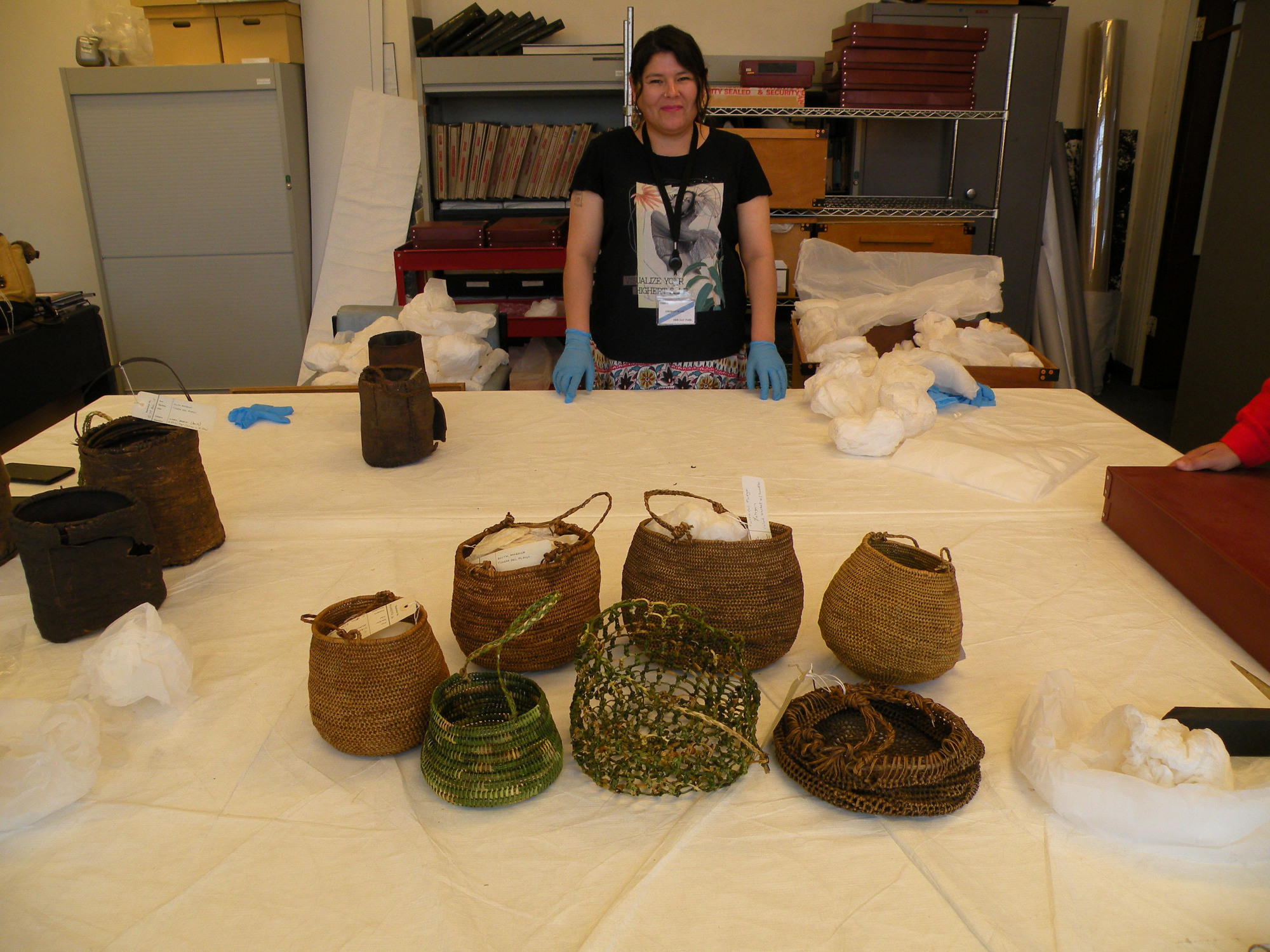 Yahgan artist Claudia González Vidal presents her contemporary woven baskets next to those that have been in the British Museum's collections for more than 150 years. Indigenous representatives from Tierra del Fuego have begun a partnership with the British Museum to study objects taken by early colonists and explorers with the hope of them eventually being returned. (Matthew Newby, SWNS/Zenger)

Indigenous South Americans have teamed up with the British Museum to study objects taken by early colonists – with the hope of them eventually being returned.

Delegates from the Yahgan and Kawéskar communities visited London, the United Kingdom’s capital, last month to study the artifacts for the first time.

He said: “The issue of repatriation or restitution is always present.

“Anyone would wish that all the objects in all the museums in Europe or elsewhere could be returned, especially those that are symbolic. And this has been coming up a lot lately.

“But we know that it’s not that simple. So firstly, we are hoping to begin working with the British Museum to explore alternatives in order to give access to the communities and people of Tierra del Fuego.

“It is a unique heritage, that of the people of Tierra del Fuego, and the objects and collections are amazing but there are more of them than what a lot of European museums think.

Among the collections at the British Museum are shell necklaces knitted together with animal fibers, fishing equipment, arrowheads, spoon instruments made of muscle and test tubes containing pigments with which indigenous people used to paint themselves.

Yahgan artist Claudia González Vidal was able to compare her own woven baskets with some of those made by her ancestors which have been in British hands for more than 150 years.

There is also a full-size canoe taken by the Anglican missionary Waite Stirling in the mid-19th century, an artifact that no longer exists in Chile itself.

Mr. Serrano Fillol said that aside from reconnecting with long-lost objects from their own culture, the Yahgans and Kawéskars can also help the museum build a more detailed picture of their history and meaning.

He added: “Ultimately, they themselves don’t have all the information about these objects and collections which is something we provided.

“From that arose the idea of this project to study and learn, because you can’t even find these objects in Patagonia.”

The delegation also visited the Pitt Rivers Museum at the University of Oxford and the British Library, where Yahgan author Cristina Zárraga Riquelme was able to study the original manuscript of a Yahgan-English dictionary made by the missionary and linguist Thomas Bridges.

Mr. Serrano Fillol said: “He was an Anglican and he was the first white person to learn Yahgan. He made a Yahgan-English dictionary which has been published.

“But the original manuscript is in the British Library. We went to see it with a woman from the Yahgan community who is dedicated to rescuing the language. She had never had the chance to see it.”

Many objects from Tierra del Fuego are in London because they were taken by early British settlers, who were the first Europeans to colonize the region.

Some also came from explorers such as Captain Cook and Robert Fitzroy, who captained the HMS Beagle on its famous voyage with Charles Darwin.

Last week the British Museum agreed to return 72 objects to Nigeria that were looted from Benin City during a military invasion in 1897 and it is also facing pressure to return a set of marble statues taken in the 19th century from the Parthenon in Athens.

But Laura Osorio Sunnucks, a researcher at the British Museum’s Santo Domingo Center of Excellence for Latin American Research, said the purpose of the current visit was not to begin a process of repatriation but to build a connection between the museum, its collections and the communities from which they came.

She added: “We reached out to Alberto because of all the excellent work he does with communities in Chile.

“It is about figuring out what they need and what they want and thinking about a project that has a really far-reaching impact.

“Some of the calls about repatriation are about colonial dominance, the museum and its ownership and the narrative around those things but what we are trying to do is create a project which is looking beyond the collections, beyond the objects themselves and looking at contemporary relationships.

“We aim to make sure that any of the projects we fund and support are ultimately more relevant to local communities than they are to the museum.”

Part of the work of the Martin Gusinde Museum in Chile is to repatriate items from the Chilean government back to indigenous communities.

Mr. Serrano Fillol said he hopes it will become easier now that a new, progressive government has been elected.

It has written a new constitution that, if approved by the electorate in September, will guarantee indigenous communities the right to repatriate objects and human remains.

The museum director added: “I hope so but at the moment in Chile, since the pandemic, the culture and museum sector has been left in very bad shape.

“There were massive cuts. It was the most affected sector in the whole country, our budget was cut in half.

“But it’s important for us to be able to develop this work. This heritage is very important.

“Sometimes the objects of these ancient people are not given that much value or importance, sometimes they are seen as secondary, but they really are remarkable.”