"We're known for breaking new ground in the domain of extreme sports, recently with the UK's first ever tandem BASE jumps.”
By Simona Kitanovska August 17, 2022
Facebook
Twitter
Linkedin
Email 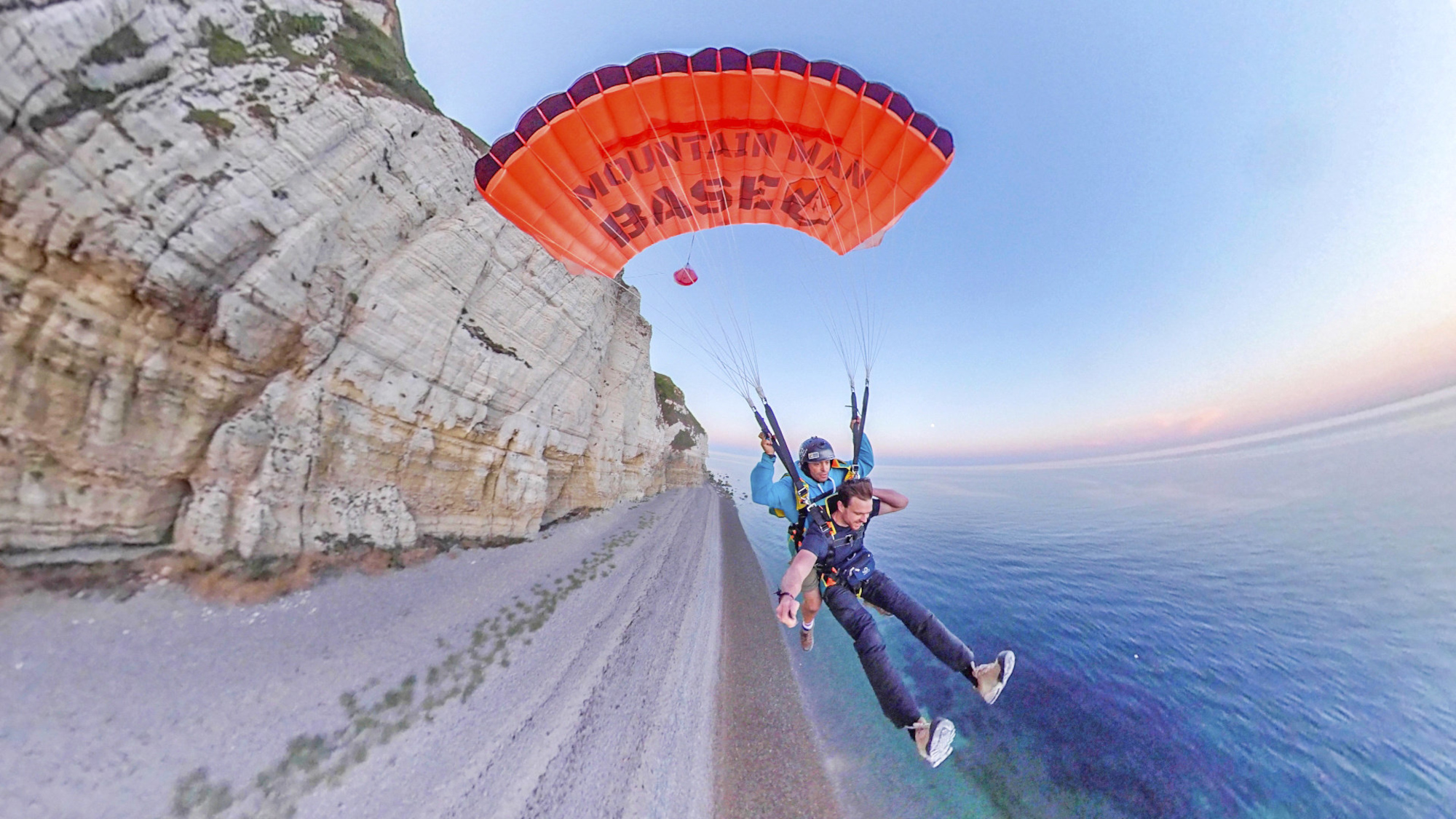 Images show a pair of daredevils jump from a chalk cliff near Beer Head, on Devon's Jurassic Coast, in the U.K., on August 8, 2022. The pair of thrill-seekers are part of the extreme sports collective Mountain Man BASE, which organized what they claim to be the UK's first ever - tandem base jump. (Mountain Man BASE, SWNS/Zenger)

A pair of daredevils have taken part in what they claim to be the U.K.’s first-ever – tandem base jump.

The pair of thrill-seekers are part of the extreme sports collective Mountain Man BASE, which organized the jump from a chalk cliff near Beer Head, on Devon’s Jurassic Coast in the south of England, in the United Kingdom.

BASE is an acronym for the buildings, antennae (referring to radio masts), spans (bridges), and earth (cliffs) from which recreational parachutists leap for thrills.

Images show the pair, assisted by a crew in the early morning of August 8, when they took the plunge to the beach at the bottom of the huge cliff.

The crew prepared for two years for this jump as there was “lots of scouting out of logistics, design of kit tailor-made for the project, deciding on the location.”

Mountain Man BASE ensure that all of their activities are within the law as they claim to be practitioners of ‘ethical BASE.’

Devon Coast Guard was informed prior to the jump.

Incidentally, this part of Devon hosted Britain’s first ever BASE jump from an ‘Earth exit.’

BASE stands for ‘Bridges, antennas, spans (bridges), and Earth’ and jumpers ‘exit’ from these locations.

“We’re known for breaking new ground in the domain of extreme sports, taking things to the next level recently with the UK’s first ever tandem BASE jumps.

“This represents the culmination of a long process of preparatory planning, tests of equipment and protocols, and trials with weighted bags before going live with humans.

“Finally, the first live jumps were performed in the week commencing August 8 at Beer Head, Devon, a 280-foot chalk cliff on the Jurassic Coast, which incidentally was the site of the first ever BASE jump from an Earth exit in the U.K. 40 years ago.

“Mountain Man BASE are experienced professionals with the skills and knowledge to make this happen.

“The jumps were conducted in liaison with the Devon Coast Guard, members of whom witnessed the jumps whilst conducting their own training exercises in the vicinity.

“Weather conditions were perfect in the week of August 8 when the live jumps were made against a magnificent backdrop with the sun going down, the sea calm and the moon coming up!

“This was a massive success, a U.K. first representing months and years of teamwork incorporating planning, designing, and testing equipment and techniques.”