The footage was obtained from SSO Azov-Kharkiv on Monday, August 15 along with a statement.
By Joseph Golder August 17, 2022
Facebook
Twitter
Linkedin
Email 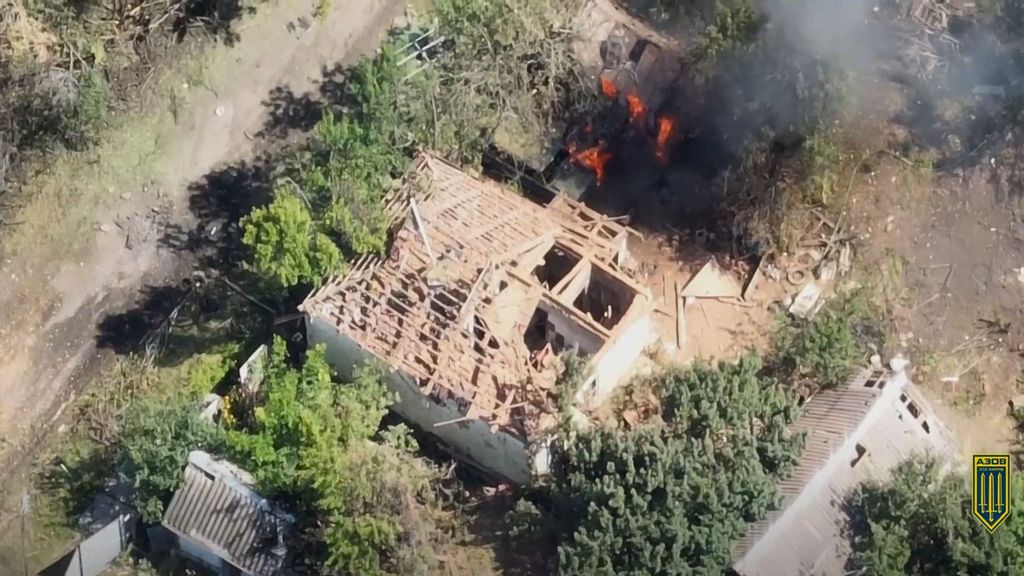 Russian ammunition depot burns after being destroyed by the Azov fighters Kharkiv region in Ukraine in undated footage. The SSO AZOV Kharkiv detachment was created in Kharkiv on May 1, 2022 and is officially part of the Armed Forces of Ukraine. (SSO AZO KHARKIV/Zenger)

The footage was reportedly shot in the eastern part of the village of Ternova, in the Kharkiv Raion, five kilometers from the Russian border.

It was obtained from SSO Azov-Kharkiv on Monday, August 15, along with a statement saying: “The video shows footage of a special operation in the eastern part of Ternova village, Kharkiv region. During the operation, the soldiers of the SSO Azov-Kharkiv destroyed two cars, two BMPs, a control and observation point, a warehouse with ammunition and seven enemy soldiers.”

The SSO is a branch of the Ukrainian military that is part of the Armed Forces of Ukraine and that is formed exclusively by special forces units.

The images were also relayed by Ukraine’s Chernihiv Regional Territorial Center for Recruitment and Social Support.

The SSO Azov-Kharkiv unit was created in Kharkiv on May 1 of this year and is part of the Armed Forces of Ukraine. The unit says that it is “continuing the history of the legendary Azov regiment while preserving all its values &ZeroWidthSpace;&ZeroWidthSpace;and many years of military experience.”

Zenger News contacted the SSO Azov-Kharkiv for further comment, as well as the Russian Ministry of Defense, but had not received a reply at the time of writing.