Antarctica’s Ice Could Be Melting Much Faster Than Previously Thought 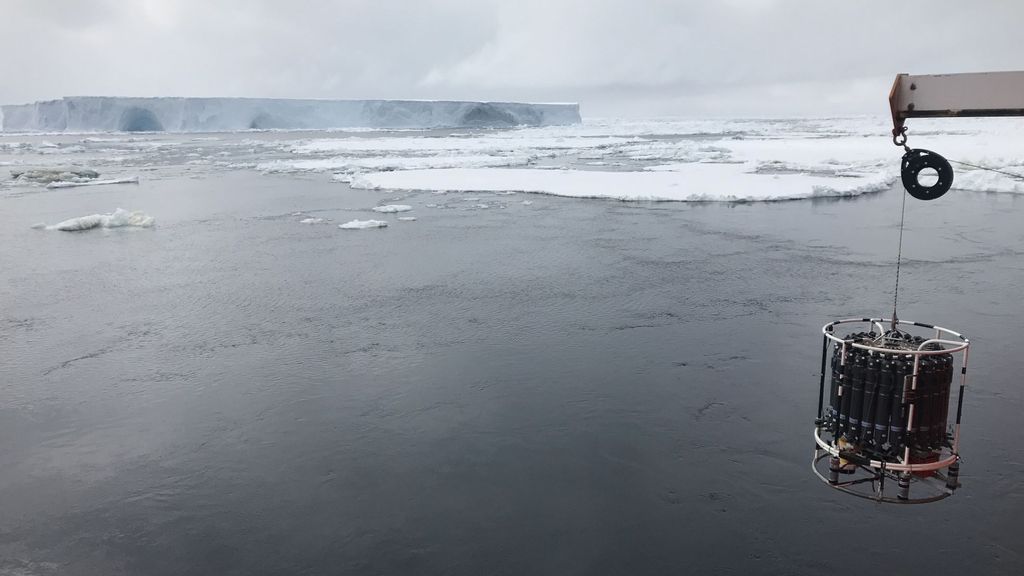 An ice shelf in the distance as researchers take measurements of temperature and salinity off the coast of Antarctica, pictured in an undated photo. Antarctica's ice shelves could be melting 40 percent faster than feared, according to new research. (Matthew Newby, SWNS/Zenger)

Antarctica’s ice shelves could be melting 40 percent faster than feared, according to new research.

The floating edges act as a break for glaciers – offer a critical line of defense against rising sea levels.

They accounted for an often-overlooked narrow ocean current along the coast. It shows rapidly flowing freshwater trapping the dense warm ocean at the base.

This causes it to liquefy even more – threatening their ability to stop the ice sheet from falling in.

It would mirror the plot of the disaster movie The Day After Tomorrow. Sea levels would rise more than 200 feet.

A massive tsunami would swamp New York City and beyond, killing millions. London, Venice and Mumbai would also become aquariums.

Co-author Professor Andy Thompson, of the California Institute of Technology, said: “If this mechanism we have been studying is active in the real world, it may mean ice shelf melt rates are 20 to 40 percent higher than the predictions in global climate models, which typically cannot simulate these strong currents near the Antarctic coast.”

The U.S. team focused on the West Antarctic Peninsula (WAP) which protrudes out of high polar latitudes and into lower, warmer ones – seeing the most dramatic changes.

They have deployed autonomous vehicles in the region and used data from tagged elephant seals to measure temperature and salinity in the water and ice.

The model included the Antarctic Coastal Current that runs counterclockwise around the entire continent – so small it had been disregarded.

Co-author Mar Flexas, also from Caltech, said: “Large global climate models don’t include this coastal current, because it’s very narrow – only about 20 kilometers [12 miles] wide, while most climate models only capture currents that are 100 kilometers [62 miles] across or larger.

“So, there is a potential for those models to not represent future melt rates very accurately.”

It illustrates freshwater that melts from ice at the WAP is carried by the coastal current and transported around the continent.

The less-dense freshwater moves along quickly near the surface of the ocean and traps relatively warm ocean saltwater against the underside of the ice shelves.

This then causes the ice shelves to melt from below. In this way, increased meltwater at the WAP can propagate climate warming via the Coastal Current.

In turn, it can also escalate melting even at West Antarctic ice shelves thousands of miles away from the peninsula.

This remote warming mechanism may be part of the reason that the loss of volume from West Antarctic ice shelves has accelerated in recent decades.

Prof. Thompson added: “There are aspects of the climate system that we are still discovering.

“As we’ve made progress in our ability to model interactions between the ocean, ice shelves, and atmosphere, we’re able to make more accurate predictions with better constraints on uncertainty.

“We may need to revisit some of the predictions of sea level rise in the next decades or century – that’s work that we’ll do going forward.”

The study is in Science Advances. Last week another U.S. team found glaciers in an Alaskan wonderland have shrunk by up to three miles in less than four decades.

Kenai Fjords National Park is in the Arctic – on the ‘roof of the world’. Melting may be faster than anywhere else on the planet, they said.