Images were obtained from the 11th Brigade named after Mykhailo Hrushevsky of the National Guard of Ukraine on August 13.
By Joseph Golder August 16, 2022
Facebook
Twitter
Linkedin
Email 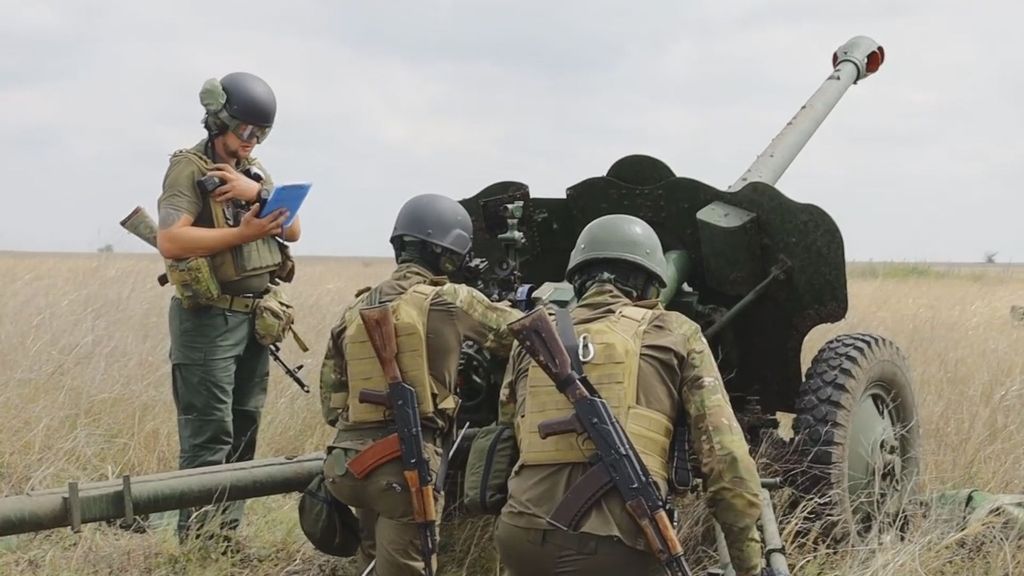 Three soldiers of the 11th Brigade named after Mykhailo Hrushevsky of the National Guard of Ukraine, unit 3012 work with howitzer in a field area of in the south of Ukraine in an undated photo. Odesa Guardsmen perform service and combat tasks both inside the country and on the front line - decently protecting the south of Ukraine. (@3012NGU/Zenger)

This footage shows Ukrainian forces pummelling the Russian invaders with howitzers and mortars as they attempt to push them south.

The images show Ukrainian howitzers being deployed in a line in a field before they are loaded with ordnance and open fire on the enemy.

‘Rashist’ is a term that is often used by the Ukrainian forces when referring to the Russian invaders. It is a portmanteau of the words ‘Russia’ and ‘fascism.’

The 11th Brigade also said: “The Odessa Guardsmen confidently perform official and combat tasks both inside our country and on the front line – decently protecting the south of Ukraine. And artillery units mercilessly destroy enemy equipment and personnel.”

The statement quoted a soldier of the National Guard, named as Guardsman Vyacheslav, as saying: “War is a place where you need to react quickly to any changes in the situation. Ukrainian infantrymen are skillfully liberating meter by meter of their native land. As a rule, the infantry is always accompanied by heavy artillery.”

The 11th Brigade said: “Fighters confidently handle the weapons entrusted to them and quickly master new models from our Western partners. In the east and south of the country, Ukrainian troops are constantly hitting the Rashists with their well-aimed shots, and our guardsmen are powerfully reinforcing the battle lines.

“Military personnel of the National Guard of Ukraine confidently destroy the occupiers together with all defenders. Racists have no place on our fertile and free land. Together we will win! Glory to Ukraine!”

The images and statement were also relayed by the National Guard of Ukraine.

Zenger News contacted the 11th Brigade for further comment, as well as the Russian Ministry of Defense, but had not received a reply at the time of writing.