Schlag said: “The scan showed that there was something on my brain. This came as a massive shock to me and my family.
By Simona Kitanovska August 16, 2022
Facebook
Twitter
Linkedin
Email 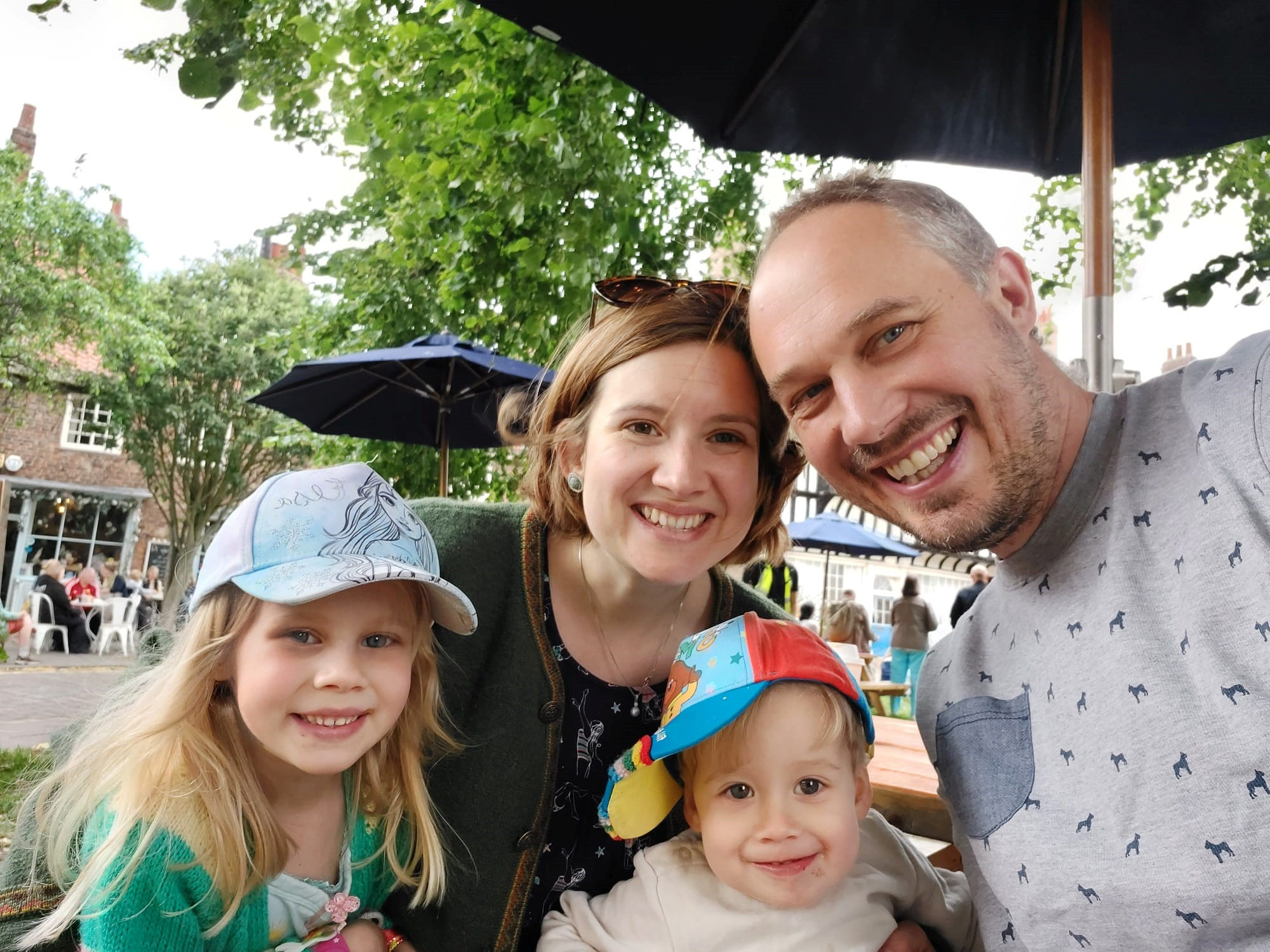 Matt Schlag poses with his family in an undated photo. Schlag was diagnosed with a brain tumor and says his boss saved his life - after calling out his poor timekeeping and ‘strange’ behavior. (Simon Galloway SWNS/Zenger)

A trainee teacher diagnosed with a brain tumor says his boss saved his life – after calling out his poor timekeeping and “strange” behavior.

English father-of-two Matt Schlag, 43, first realized something was wrong when he was studying to become a primary school teacher and developed migraines.

His boss at the GORSE Academies Trust in Leeds, in the north of England, in the U.K., told him he was behaving strangely, and was often tardy at work.

His employer also noticed he would be confused mid-conversation and was even getting lost around the school.

Schlag visited the hospital and was diagnosed with an anaplastic astrocytoma brain tumor in October 2019 – and says his boss saved his life.

He is now working with the charity Brain Tumor Research to raise awareness of the disease.

Schlag, dad to Reuben, two, and Anja, four, said: “I kept on getting really awful migraines every other day.

”They were really intense, and I was also getting lost in conversations and forgetting my words, it was really weird.

“My boss said ‘you need to get this properly checked out because you’re behaving strangely’, as my timekeeping had become so poor and I was getting lost not only in conversations but around the school building itself.

“I was away with the fairies and I wasn’t my usual eloquent self. I was awkward in conversation and I wasn’t really engaging with people like I usually would.

“My boss was instrumental in helping me deal with the situation and getting me sorted out as I wasn’t capable at the time. His intervention saved my life.”

In October 2019, Schlag, who is married to Louise, 36, went to Accident and Emergency at Leeds General Infirmary (LGI) and ‘insisted’ he have a scan.

Schlag said: “The scan showed that there was something on my brain. This came as a massive shock to me and my family.

“Three days later, which happened to be my daughter’s second birthday, I underwent surgery.

”The operation went well, and I was so elated that when I woke up, I was singing ‘Aqua Azzura’ in Italian.

”I don’t know if it was the drugs I was on, but I just felt so happy because I’m fluent in Italian, and this meant that I hadn’t lost my language skills completely.”

Schlag underwent three months of radiotherapy and 12 months of chemotherapy. In August 2020, a check-up scan showed his tumor had grown again.

He said: “I thought ‘not this again’ because Louise and I had celebrated with champagne, thinking that I had beaten this and that we could draw a line under it.”

Schlag had a second operation on September 13, 2020, followed by six months of chemotherapy.

Now, Schlag will take on the 55-mile London to Brighton Cycle Ride on September 11 with his friends Chris Lumb, 44, and Chris Keithley, 43, to raise money for the charity Brain Tumor Research.

He said: “I just wanted to make something positive out of what’s happened. It’s so important to raise money to help find a cure because, until a cure is found, there’s always the worry that the tumor can come back again.”

Matthew Price, community development manager at Brain Tumor Research said: “We’re really grateful to Matt and his two friends for taking on this challenge, as it’s only with the support of people like them that we’re able to progress our research into brain tumors and improve the outcome for patients like Matt who are forced to fight this awful disease.

“Brain tumors are indiscriminate. They can affect anyone at any time. Too little is known about the causes and that is why increased investment in research is vital.”

Brain Tumor Research funds sustainable research at dedicated centers in the United Kingdom. It also campaigns for the government and the larger cancer charities to invest more in research into brain tumors in order to speed up new treatments for patients and, ultimately, to find a cure.

The charity is the driving force behind the call for a national annual spend of $42 million in order to improve survival rates and patient outcomes in line with other cancers such as breast cancer and leukemia and is also campaigning for greater repurposing of drugs.