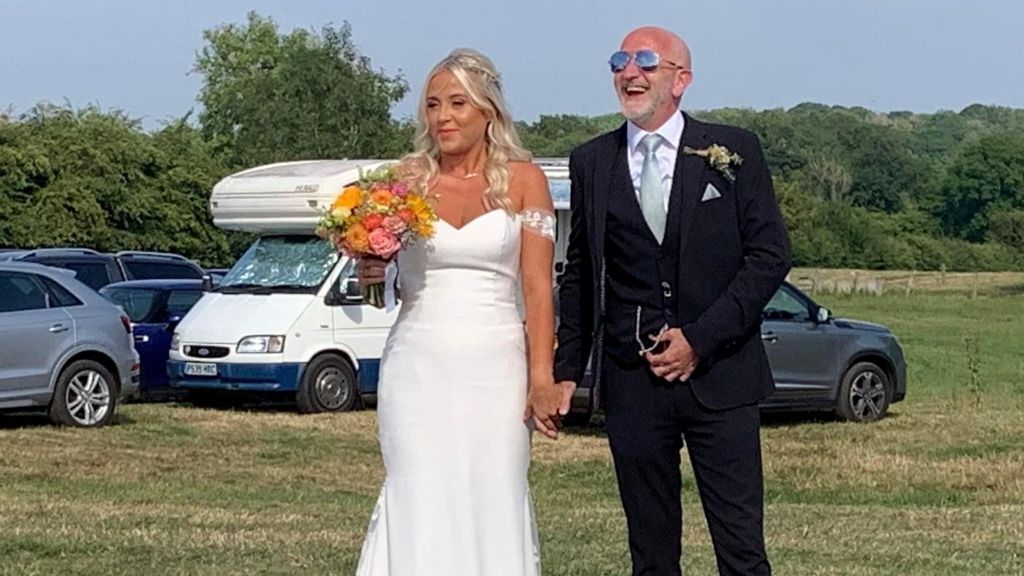 Rich Foetu Tomkinson, 48, and wife Evie Foetu Tomkinson, 29 pictured on their wedding day, in July 2022. Rich, who is 19 years older than his wife, was shocked to find out he had met her when she was a baby - and now the couple are expecting their own little one together. (Rich Tomkinson, SWNS/Zenger)

A man who is 19 years older than his wife was shocked to find out he had met her when she was a baby – and now the couple are expecting their own little one together.

Neither of them expected to end up in a relationship together because of their age gap but they hit it off.

By October 2018 they couldn’t deny how they felt about each other, and moved in together in February 2019, with Mr. Tomkinson proposing in September 2019.

Mr. Tomkinson was shocked when he was introduced to Evie’s mother, Sarah Owen, 53, a councilor, and realized they had in fact met before while working on the same street as each other in the 1990s – meaning he would have seen her as a baby when Sarah pushed her around in a stroller.

But with the support of their family and friends, the couple tied the knot in July 2022 and they are now expecting a baby together – due in January 2023.

Mr. Tomkinson, a surveyor, from Stafford, Staffordshire, in England’s West Midlands region, in the United Kingdom, said: “It was a bit freaky when I realized I’d met Evie as a baby, but I had no idea at the time.

“We just laugh about it.

“Age is just a number to us, and you can’t help who you fall in love with.

“I’ve been mistaken for Evie’s dad before, but most people can see how well we click. The 19-year age gap doesn’t bother us at all.

“Marrying Evie was the best day of my life and I’m so excited to have a baby with her.”

Ms. Tomkinson, a social worker, said: “It was a bit odd when we worked out Rich had met me when I was a baby.

“He’s so fun and has the biggest heart.

“When we’re together you can’t really tell we’ve got a big age gap – apart from Rich’s grey beard.

“He’s going to be a great father.”

Sparks flew when they hit it off as soon as they got chatting at a bar in July 2018.

“I was just drawn to him from our first conversation.”

“We really hit it off,” Mr. Tomkinson said.

“I invited her to get involved with a big charity event I was doing so we could keep in touch.”

The pair carried on chatting and meeting up at the pub and Mr. Tomkinson realized he had fallen for her when she was away on vacation.

“I realized I really missed her and was worried about her when she was away,” he said.

“I told her when she came back, and she said she felt the same.

“My dad was diagnosed with cancer in October 2018 and passed away at Christmas, and Evie stuck by me.”

The couple moved in together in February 2019 and Mr. Tomkinson proposed in September 2019 in front of 1,000 people at their local theater, during a showing of a documentary on the charity event he had put on in March 2019.

Although the couple have always had the support of their families, they have been mistaken for father and daughter.

“A woman asked if I was with my dad once,” she said.

“But it wasn’t malicious and I think she was mortified when I told her it was my boyfriend.”

The pair had planned to get married in June 2021, but the couple decided to postpone their big day due to COVID restrictions and when Ms. Tomkinson suddenly lost her dad, Martyn Locke, 60, in July 2021.

“I couldn’t bear the thought of not having my dad there to walk me down the aisle,” she said.

Mr. Tomkinson suffered another blow when he lost his mother, Nicole Tomkinson, 76, in October 2021.

After a tough few months, the couple rearranged their wedding to July 2022 – opting for an intimate ceremony followed by a big party in a friend’s field with over 200 guests.

“We had a wedding dance-off and so much fun,” he said.

“It was the best day.

“Our family and friends have always been supportive, and they can see how happy we are.

“At the beginning, I don’t think anyone expected we would last – even us – but now we’re happily married and expecting a little one.”

“My parents have always been supportive of Rich as they could see he made me happy,” Ms. Tomkinson said.

“I’d been in turbulent relationships before so they could see that he was a genuinely good person who had a lot of love for their daughter.”

The couple had more good news when they found out they were expecting in May 2022.

“We had been trying for a few months,” Mr. Tomkinson said.

“I was worried it might be hard to get pregnant because of Rich’s age,” Ms. Tomkinson said.

“So, we were so excited when we found out.

“Rich sobbed his eyes out.”

Now the newlyweds are looking forward to starting a family together and traveling in their converted van.

“Rich is still a fit and healthy man and I know he’s going to be a hands-on dad,” Ms. Tomkinson said.

“His age isn’t going to affect him as a father – I know he’s going to be amazing.”

“We’ve already thought about people thinking I’m the grandad rather than the dad at sports days and things like that,” Mr. Tomkinson said.