Hundreds Demand The World’s Tallest Ceramic Statue To Be Removed, Saying It Resembles A Kebab 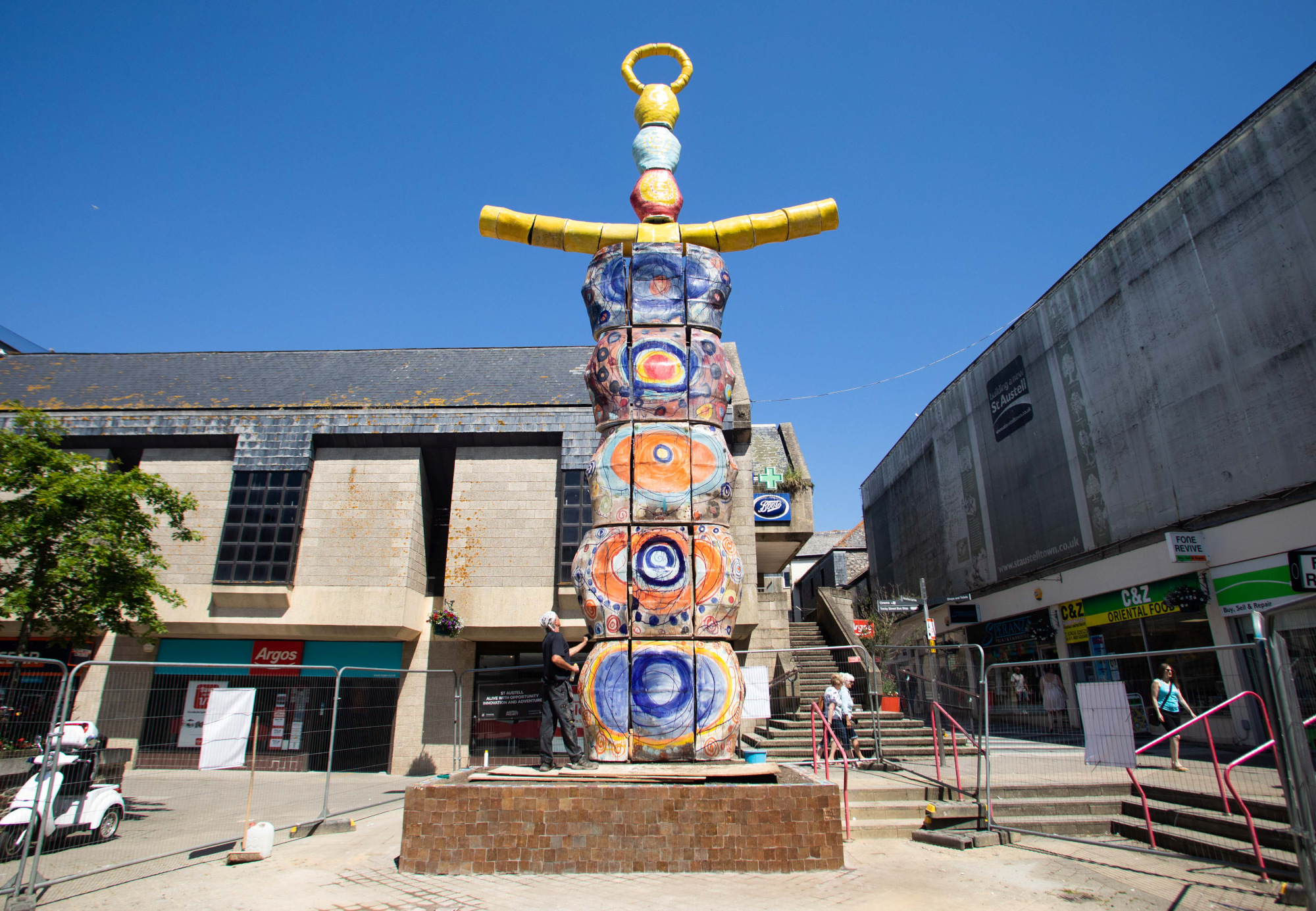 Hundreds of people have demanded the world’s tallest ceramic statue built at a cost of $96k is removed - after comparing it to a kebab. Undated photograph. (James Dadzitis SWNS/Zenger)

Hundreds of people have demanded the world’s tallest ceramic statue built at a cost of nearly $97k is removed – after comparing it to a kebab.

The structure called ‘Earth Goddess’ was created by artist Sandy Brown to celebrate the heritage of China clay in St Austell, Cornwall, in the United Kingdom.

Priced at 80,000 British pounds ($96,800), the statue aimed to put the town ‘on the map’ after three years of construction, but a petition has now been launched to have it removed.

So far 417 people have signed calling to remove the artwork “with immediate effect”, with one person referring to it as “an offense to God”.

The online petition was started by Scott Moran who said that it has also been shared with Cornwall Council – although the council was not involved with the project.

One man suggested it would be a good local meeting place, commenting: “Meet me by the pork sword in town.”

Another added: “It looks just like a kebab – it’s become a bit of an embarrassment.”

Among those who signed the petition was one resident called it an “offense to god.”

One resident stated: “A commissioned artwork shouldn’t have any religious connotations which are now being imposed upon the town of St Austell.

“This is an offense not only to members of the public but also to God. Just imagine the amount of good that could have come from that 80,000 pounds [$96,800] could have fed and homed homeless people.”

Another resident added: “I do not believe this ‘statue’ represents the town or its heritage.

“The China clay industry could have been better represented and I for one do not want to be confronted by what is supposed to be an ‘earth goddess’ every time I walk through Aylmer Square.

“I hope this petition is successful and the statue is taken down swiftly.”

Another said: “Our town is named after a saint of the Christian faith, not a so-called earth goddess.

“What a waste of money anyway at these times of personal financial difficulty for so many. In a way, I am glad it doesn’t claim to represent the Saint as it would be a total misrepresentation of all the monks stood for.”

And another resident said it would be better to have something to pay tribute to D-Day veteran Harry Billinge who lived in the town and died in April: “St Austell doesn’t need a badly bodged-up pagan idol watching over the town’s inhabitants.

“The town would be better off with a statue honoring a great man of God like Harry Billinge. A humble man who gave so much to St Austell town and his country.”

Described online as resembling a ‘giant Native American totem’, the statue is the crowning piece of the Austell Project’s Whitegold Ceramic Art Trail.

The project aims to “work with creative people, to make innovative and activated public spaces that use art and design to celebrate the culture of clay country, adding to a sense of place.

While some admired the design, many locals slated the statue online, with one woman posting: “Probably the most laughable thing in Cornwall. What a total joke.

“Did the residents actually pay for this? Kinda says it all really about the decision makers.”

St Austell and Newquay MP Steve Double has also laid into the debate.

He said: “I appreciate art is subjective.

”I appreciate that there may be some people who like this statue, however clearly there are many who don’t.

”Personally, if I were involved in choosing something that reflects St Austell’s identity, heritage and history, I think it is fair to say I would not have chosen this design.”

Artist Sandy Brown explained: “I really wanted this sculpture to make an impact and for it to visually connect with St Austell’s rich China clay heritage.

“The Earth Goddess is made of the product, clay, which is so intrinsic to this place.

“It’s my hope that she celebrates the town’s unique history and represents our collective and eternal roots with the environment, nature and mother earth.”