The charm, made from nine-carat gold, was given by magician P. T. Selbit to brave audience members who agreed to take part.
By Simona Kitanovska August 16, 2022
Facebook
Twitter
Linkedin
Email 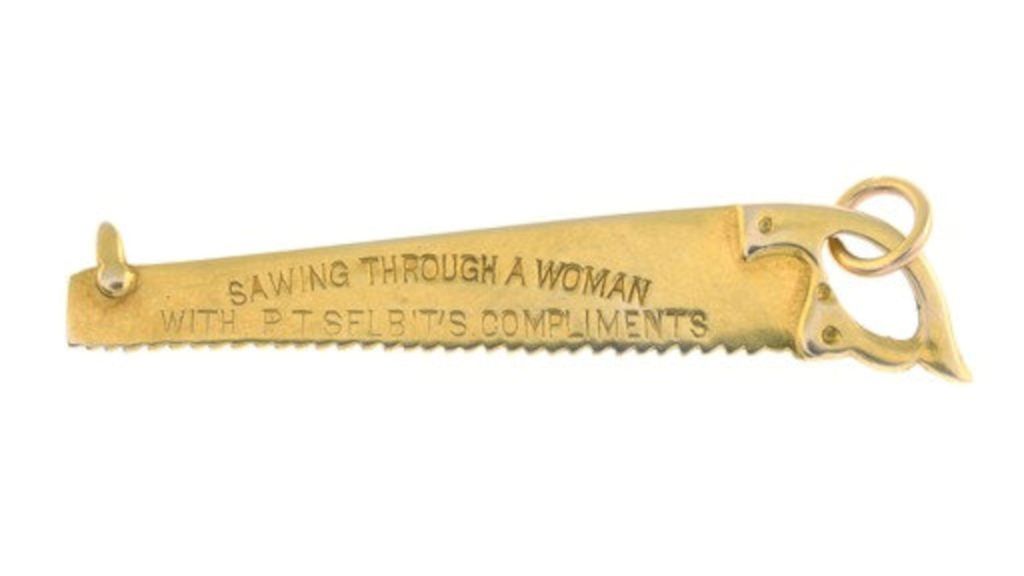 The charm that was given by magician P. T. Selbit to brave audience members who agreed to take part in the now-famous “Sawing Through A Woman” illusion in 1921, pictured in an undated photo. The charm has sold for more than 50 times its estimated value at auction. (Matthew Newby, SWNS/Zenger)

A gold charm given to a woman who volunteered to be “sawn in two” in the first ever performance of the famous magic trick, has sold for more than 50 times its estimate.

The charm, made from nine-carat gold, was given by magician P. T. Selbit to brave audience members who agreed to take part in the now-famous “Sawing Through A Woman” illusion.

He came up with the trick, where a woman is apparently divided into two or more pieces, and first tried it on audiences in 1921.

Volunteers who agreed to take part in the trick were given a little gold saw charm during the performance.

She had watched him perform the trick at the Finsbury Park Empire theater in London, in the United Kingdom, on January 17, 1921.

The charm, which weighs one and a half grams, is small with an engraving which reads ‘Sawing Through a Woman with P.T.Selbit’s Compliments’.

Gladys’ daughter Eileen said: “This gold saw was given to my grandmother by the Magician P.T.Selbit for “assisting” in his sawing through a woman in half act at his show at the Finsbury Park Empire in 1921.

“It has been kept by my family ever since.

“Members of the audience were invited on stage to help with the act and my grandmother took part.”

Jewelry auction Manager Alex Duffy said: “I had to rub my eyes watching the bidding go up just to be sure it wasn’t an illusion, but what a great result.

“It was fantastic to see enthusiasts fighting over this rare piece of magic history and I am delighted to know it will be going somewhere it can be truly appreciated”.

He was apprenticed to a silversmith who leased space to magician Charles Morritt.

It was here where he learned card tricks and illusions from Morritt’s collection, often studying them while the older man was away.

He soon decided to write and perform under a pseudonym derived from his own name and he reversed the order of the letters in his surname and removed one “b” to become P. T. Selbit.

His most famous illusion act associated with the magician is Sawing A Woman In Half, which has become a world-famous act performed by countless magicians across the globe.