Hayes said she brought Moosha, believed to be a German Shepherd cross, over from Eastern Europe through a rescue dog company.
By Simona Kitanovska August 16, 2022
Facebook
Twitter
Linkedin
Email 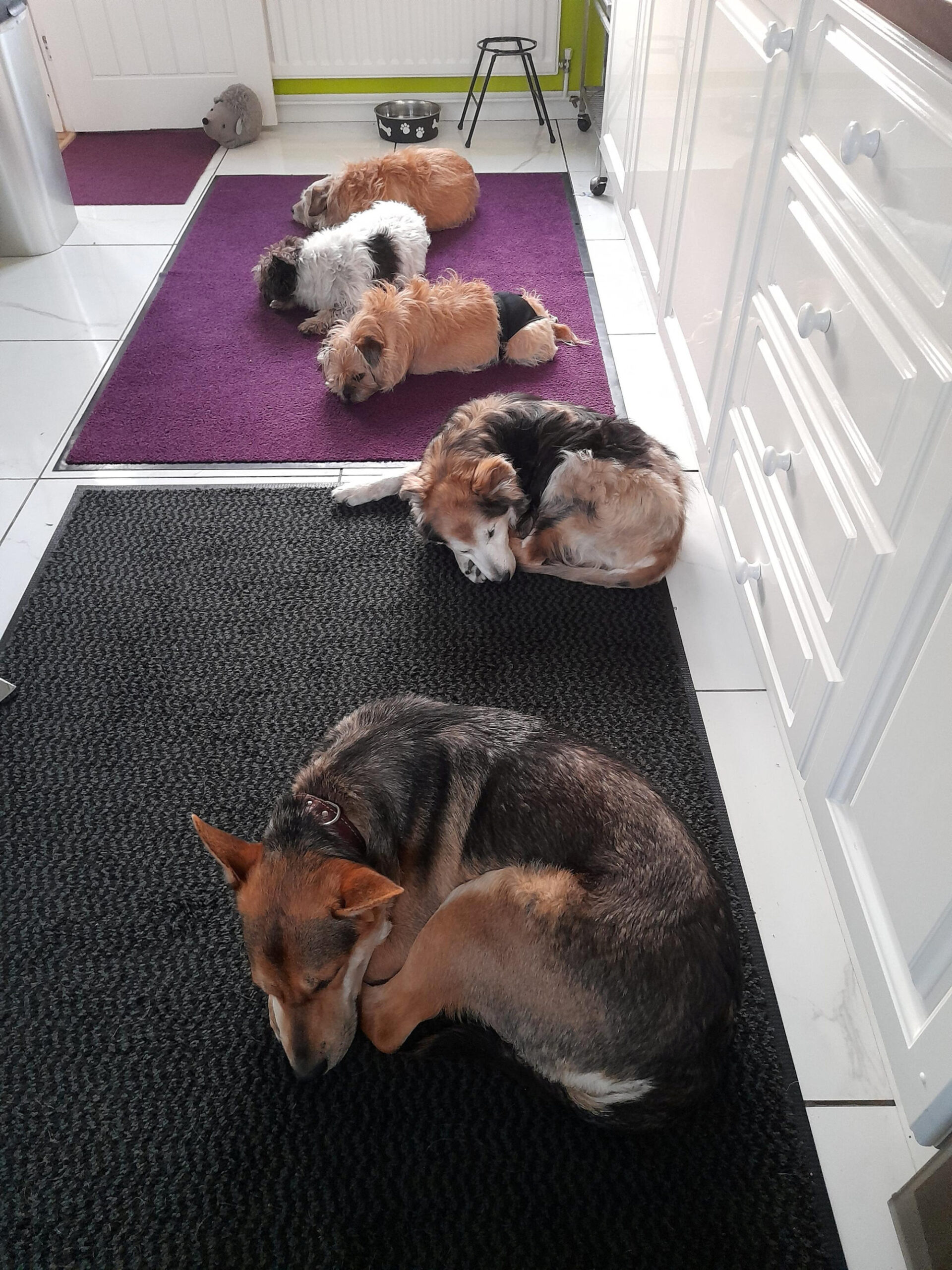 Wendy Hayes' five dogs pictured in an undated photo. Hayes' dogs had to be put down after they contracted Brucella canis from a Belarusian rescue dog she was fostering. (Wendy Wendy, SWNS/Zenger)

A heartbroken woman was forced to put down her five family dogs after becoming the first person in the United Kingdom to be diagnosed with a rare infectious disease.

Wendy Hayes, 61, was left with no choice but to euthanize her beloved pooches after they contracted Brucella canis from a Belarusian rescue dog she was fostering.

Moosha, the infected stray dog, had only been with Hayes for three days before she started spontaneously aborting her puppies all over the home in a horrific experience that lasted 17 hours.

She was initially put on a “stay at home” notice due to a fear of rabies – but both she and the dog were eventually diagnosed with the rare disease two months later.

But her pooches Benson, a 13-year-old Jack Russell, Dougie, an 11-year-old Patterdale Cross, Tiny, a four-year-old Pug, and Max, nine, unknown breed, could not be saved – leaving Hayes and the family distraught.

She said: “It felt so unreal, to think about how many people are in the U.K., to think that this is the first ever for this type of strain. The doctors were actually quite excited.”

Hayes, who is married and has a son and two grandkids, said she most likely contracted the disease through Moosha’s birthing fluids and the rescue dog had to be put down.

She was then faced with the heartbreaking reality that she would have to put her own four dogs down due to them living in such close contact.

She said: “All five dogs were put down, they were the innocent party in this. I blame this rescue, and I blame the government for letting it happen and not testing.

Hayes said she brought Moosha, believed to be a German Shepherd cross, over from Eastern Europe through a rescue dog company, which mainly sources stray dogs from Ukraine and Belarus.

Once dogs test positive for Brucella canis they are infected for life. It is mainly transmitted through a dog’s bodily fluids, such as urine, blood and saliva, and in extremely rare cases can be passed on to humans.

Hayes, from Stoke-on-Trent in Staffordshire in England’s Midlands region, in the U.K., said she had no option but to have her dogs put down.

She added: “You still feel guilt.

“I had read enough of the infection at this point. I knew that I’d have to do to our dogs.

“I just went into shock, I was sobbing. There was no real choice, there was no real quality of life for them. Benson, Douggie and Max (another foster dog) were positive while Tiny had tested negative but was at a high risk of positive.

“It’s heartbreaking to have one dog put down, let alone do it three times over. How do you get over that?”

She added: “The company I foster through brought dogs over from Belarus and Ukraine. Two vans brought dogs in from there.

“Within two days of them arriving all the dogs from the Ukraine van had been taken by animal control. We were told it was a paperwork issue. Then the story went on and that it was to do with the rabies laws.

“I had Moosha for three days, she came on March 20 before she started aborting her puppies, which was pretty horrific.

“She was literally walking around the house dropping her puppies, there was blood all over the house.

“I managed to get a hold of two of them. Tried to bring it around but it was dead. That is probably when I contracted the disease.

“It was 1 a.m. and she woke me up. This went on until half past six at night. I was scrubbing everything, it was a nightmare.

“‘Don’t worry, they’re not like humans, they’re very clean.’ That was from the lady who runs the rescue.

“Two weeks after she lost the pups, trading standards sent me a 21-day notice. It meant she couldn’t leave, she had to stay in my property.

“She lived in my home until May 13. I only really felt something was up after I got back from visiting her.”

Moosha was still not known to be carrying the disease at this point, and it only emerged when Hayes sought medical help after feeling unwell.

She added: “I went into hospital on May 23. I went to my GP because I felt quite poorly and he sent me straight up to the hospital that day.

“I hadn’t been feeling well before that, but I put it down to stress after Moosha was taken.

“I was moved to the infectious disease ward at Stoke hospital. I didn’t get a diagnosis until Friday because they had a very clued-up doctor, who suggested it was Brucella canis.

“Even though I felt ill, you don’t stop worrying about the dogs.

“I was already in isolation, in infectious diseases you can’t leave your room. It was a tough time, there was no one to talk to.

“They let me out the following Thursday, June 2, but I had the nurses coming out to me for two and a half weeks giving me five lots of antibiotics.”

While hospitalized, Hayes suffered a high temperature, chills, and shivers, bad shakes, severe headaches, severe backache, and low blood pressure. Because she was immune-compromised the disease hit her harder than it would do for most.

She added: “I am still on two tablets for another three or four weeks.

“It affected my husband and my son. There were so few people, as no one understood the disease.

“I couldn’t have the grandchildren over because of the risk of the bacteria.

“They need to stop messing about and just do something. Make it compulsory for all zoonotic diseases. They boast about being rabies-free for years. It’s just around the corner waiting to happen.

“We need testing for it. And we need to come down hard on those bad rescues.”