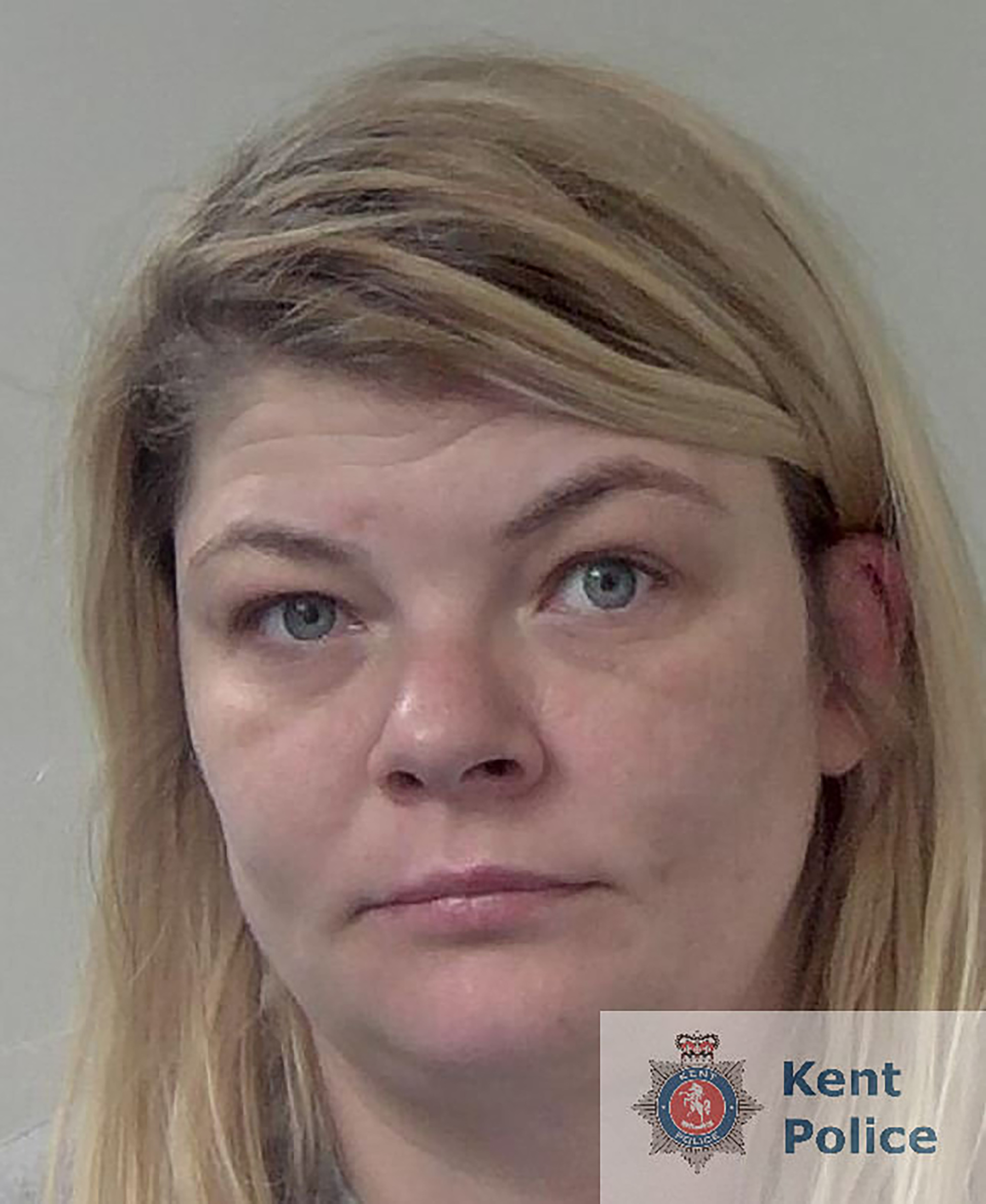 Police image of Kayleigh Halliday, undated. Halliday and her partner Shane Myles were found guilty of murdering kind pensioner Paul Wakefield and are due to be sentenced for their crime on August 26, 2022.(Kent Police,SWNS/Zenger)

A woman and her lover who kissed and laughed after killing a kind pensioner who was “like a father” to them face life behind bars.

Kayleigh Halliday, 36, smashed a bottle over Paul Wakefield’s head before stabbing him with a glass shard and stamping on him.

Halliday had admitted manslaughter, but changed her murder plea to guilty midway through a trial.

She and her partner Shane Myles, 31, were described as being “in raptures” after the horrific attack in which Mr. Wakefield was beaten, stabbed with a bottle and stamped on at his home in Folkestone, Kent, in the United Kingdom.

Myles was found guilty of murder on Wednesday, August 10.

Myles admitted stamping on Mr. Wakefield’s head, but denied the more serious charge, alleging the stabbing was carried out by Halliday. But a jury today convicted him of murder.

Mr. Taylor said: “They were in raptures with each other after that event.

“The Crown says that Myles is a self-serving liar and nothing that comes out of his mouth is intended to establish the truth.”

He told the 11-strong jury Halliday and Myles had “abused the trust bestowed on them” by the victim.

Mr. Taylor added: “They called Mr. Wakefield ‘dad’ yet they betrayed him by beating him to death and stealing from him.

“The sheer brutality of the assault speaks volumes as to what was going on in the minds of the defendants.

“Look at the injuries to Mr. Wakefield’s scalp and imagine doing that to another human being without having the intention to cause really serious harm.

“Mr. Wakefield’s top was lifted so he could be stabbed in the torso before they left him to die”

Myles had claimed he had been frightened to admit he had attacked Mr. Wakefield as he lay dying on the floor of his home in January.

But Mr. Taylor told the court: “There was no regret, no arguments, no contrition. Just kissing, holding hands, caressing and laughing. They were in raptures with each other after that event.”

Myles lied about taking part in the attack on the man, who had called him “son”, in a three-hour police interview – and again in his legal defense statement.

The prosecutor asked: “What was the reason you changed your account?”

Myles replied: “I wanted to tell the truth.”

Mr. Taylor asked him: “Why did you wait until after April 8 this year to tell the truth?”

Myles, of Gillingham, Kent, answered: “I didn’t want to admit to myself what I had done, I was ashamed.”

The prosecutor retorted: “We say you are lying about that.

“We say you did it only after being served with blood analysis evidence.

“The reason you accepted the stamp and kick was because you were aware that there was scientific evidence that showed that that was what you had done.

“It had nothing to do with Mr. Wakefield’s family. You were driven there by the evidence.”

Myles replied: “I knew it was only a matter of time before the truth would come out. I know it looks bad but I wanted to tell the truth.

“I want the family to know the truth, hard though it would be for them to hear it. I did it for the family of Mr. Wakefield. I wanted to be honest.

“It was affecting my mental health and I wanted closure for his family. Only I can tell the truth.”

Myles said while on remand he spoke with a fellow prisoner and decided to admit what he had done.

Mr. Wakefield died from his injuries after he invited Myles’ ex-lover Halliday to stay at his home.

The jury heard how Myles, who had been released from a prison sentence only days earlier, arrived at the flat to apologize for stealing Mr. Wakefield’s TV.

After binging on vodka and cider, he and Halliday launched a ferocious attack and Mr. Wakefield was beaten and stamped to death. The pair then left after taking his wallet, mobile phone and credit card.

Mr. Taylor told the jury: “What Myles describes as regret, you can be sure is regret for himself and not for Mr. Wakefield, or his family as he pathetically testified.

“The evidence is clear that the two defendant’s beat an unwell man to death in his own home.

“They smashed him over the head with a bottle – possibly a cup as well; they stamped on his head; they “heel-kicked” him to the head; they stabbed him with a broken bottle; at some stage during the incident they took his belongings; and then they left him on the floor of his home – dying.”

Following the verdict, Judge Philip Statman praised the police team for its excellent work in solving the murder.

He said: “They have shown throughout police work at its best.”

Mr. Wakefield was discovered at 8.50 p.m. on January 2 and attending officers quickly established Halliday and Myles had been at the property.

They were tracked down and arrested elsewhere in Folkestone around three hours later. Myles had Mr. Wakefield’s bank card on him and traces of the victim’s blood were found on both suspects’ shoes.

Detectives later used CCTV to work out the route taken by the pair following the attack and Mr. Wakefield’s phone was found discarded on that route.

DI Ross Gurden, of the Kent and Essex Serious Crime Directorate, said: “These two offenders carried out an extremely violent and tragically fatal attack on a man who had invited them into his home.

“Despite trying to blame each other for the crime, I am pleased the diligent work of our team means they will both now be sentenced for murder.

“Mr. Wakefield’s death was deeply upsetting for his family, friends and the local community and I hope the fact that his killers have been brought to justice provides some solace to those who knew him.

Judge Statman also praised Mr. Wakefield’s family for distinguishing themselves by their dignity.

Halliday, of Sittingbourne, Kent, and Myles are due to be sentenced on August 26.