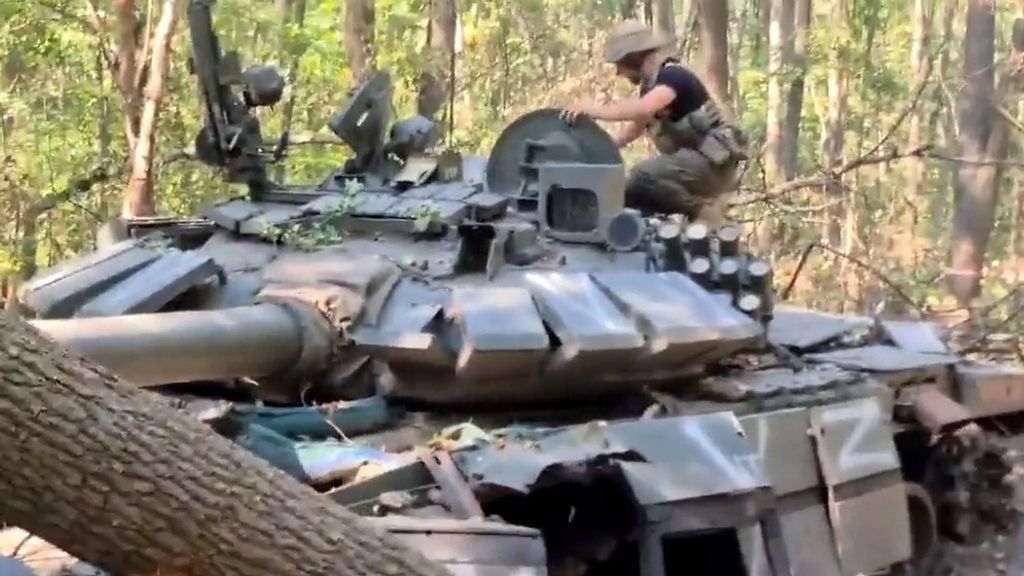 Ukrainian soldier looks into open tank hatch of Russian T-72B3 tank in Izyum direction, Ukraine in an undated photo. T-72B3 represents a relatively simple and effective upgrade of the T-72B tank, as a result of which the accuracy of firing has increased significantly compared to the base model.(@UkrainianLandForces/Zenger)

Ukrainian soldiers discovered a damaged Russian T72-B3 tank in a forest in eastern Ukraine and claimed it as a “trophy”, as these images show.

In the footage, a soldier can be heard saying (in Ukrainian): “Time for videos!”

A second soldier then says: “Take everything you need, guys!”

He adds: “Come here and move the barrel! Is it stuck? Does anybody know if it is mined? No?”

The first soldier then says: “What happened?”

The first soldier then says: “Take everything carefully, f**k!”

While the second soldier asks again: “Is it mined?”

But it appears that it was not mined, with the Ukrainian Ground Forces releasing the images on Friday, August 12, and saying that they were filmed near Izyum and that the tank was a T-72B3.

The family of T72 of Russian main battle tanks entered production in 1969. Since that time, improvements and modifications have been added. The T72-B3 tanks have explosive reactive armor and improved weaponry.

Zenger News contacted the head of the public relations service of the Ground Forces Command of the Armed Forces of Ukraine, and Major Fityo Volodymyr, who confirmed that the footage was authentic and that the information was accurate.

The images were also relayed by the Office of Strategic Communications (StratCom) of the Armed Forces of Ukraine, saying that the tank was another “trophy.”

Izyum is a city on the Donets River in Kharkiv Oblast of eastern Ukraine.