The images were obtained from the Ground Forces of the Armed Forces of Ukraine on Friday, August 12.
By Joseph Golder August 15, 2022
Facebook
Twitter
Linkedin
Email 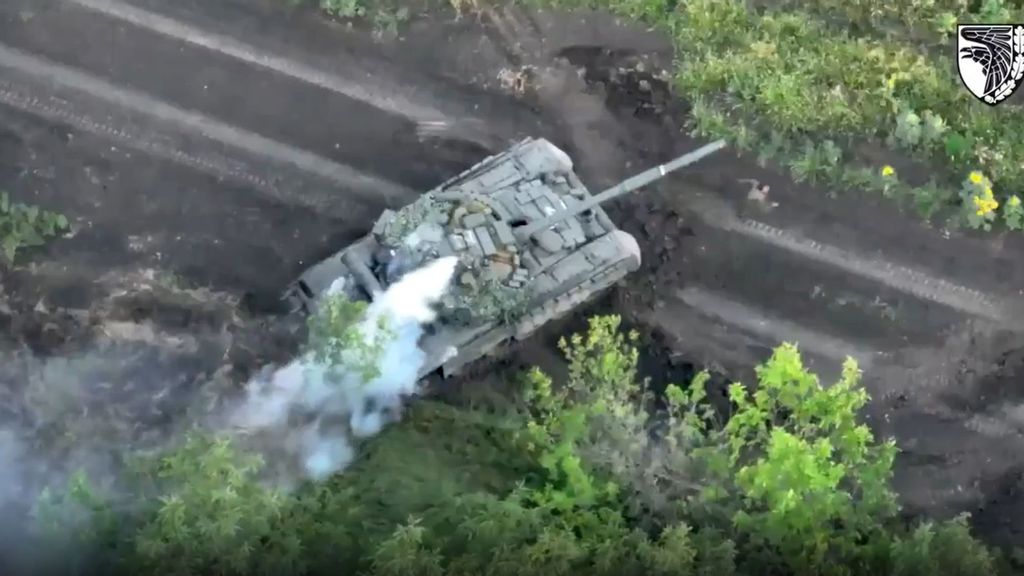 Russian trooper runs away from damaged tank in a gun smoke in a field area in Ukraine in an undated photo. Soldiers of the 93rd brigade Kholodny Yar shelled Russian tank with Z letter on it.  (@UkrainianLandForces/Zenger)

These images show a Russian soldier abandoning his tank and running for his life after being shelled by Ukrainian forces.

The video begins by showing Ukrainian soldiers in light vehicles apparently patrolling the front lines and looking for targets.

It then cuts to a Russian tank that can be seen driving along a rural road at speed. It is hit by Ukrainian ordnance, which causes a large explosion and smoke to begin gushing from the tank.

The tank can be seen continuing to drive on despite being damaged but it soon becomes clear that it is on fire.

The soldier piloting the tank then appears to decide to try and stash it, stopping on the road and beginning to reverse it. But the fire intensifies and the tank, on which a large white ‘Z’ can be seen, abruptly stops moving.

A soldier can then be seen clambering out of the hatch and running for his life as the tank continues to burn.

The footage then cuts to some Ukrainian soldiers in another light vehicle. The four soldiers can be seen getting out, with one raising his arms to the camera as if to celebrate the victory as the footage ends.

The images were obtained from the Ground Forces of the Armed Forces of Ukraine on Friday, August 12, along with a short statement saying that the footage shows how the 93rd Mechanized Brigade of the Ukrainian Ground Forces “knocked out a tank”.

The images and information were also relayed by the National Security and Defense Council of Ukraine.