Popcorn With Zenger: ‘Not Okay’ Bait And Switches Its Way To 2022’s Worst Film

A movie about the problems of influencer culture fails to capitalize on its premise.
By Jacob Smith August 15, 2022
Facebook
Twitter
Linkedin
Email 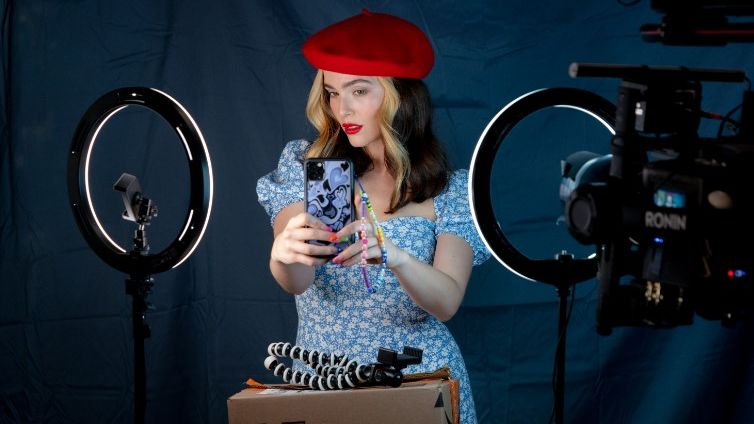 Zoey Deutch plays a 20something whose Instagram lie goes terribly wrong in “Not Okay.” (Searchlight Pictures)

On occasion, filmmakers eager to make a provocative social point say more about themselves than the ugly truths they hope to expose.

“Not Okay” is a good example.

Some critics suggest “Not Okay” is a film that criticizes the negative aspects of social media, while taking a sledgehammer to white privilege, white feminism and fascism. In reality, “Not Okay,” now streaming on Hulu, is the cinematic equivalent of one white woman complaining about another.

In the hands of the right filmmaker, this could have been a movie about a narcissistic woman who struggles to maintain a socially acceptable lifestyle in a large metropolitan city. Instead, we got the latest film from Quinn Shephard (“Blame”).

“Satire” is the use of humor, irony, exaggeration or ridicule to expose and criticize people’s stupidity or vices, particularly in the context of politics and other topical issues. A film ceases to be satire when, instead of laughing at the absurdities of society, it shows contempt for those it hopes to lampoon.

The Story: “Not Okay” is a story of a girl named Danni Sanders (Zoey Deutch). Danni lives a lonely life working at the online magazine Depravity, with colleagues who despise her because she is a CIS white woman. She lives in a terrible part of town, tripping over homeless people, and comes home to a run-down apartment before browsing through social media, wondering why she has no friends.

One day, she decides to post a fake trip to Paris to gain clout on Instagram. Danni Photoshops pictures of herself in Paris and fools viewers into thinking she is having a great time. That is, until a terrorist attack strikes the city — and Danni tells people she was there when it happened. Danny becomes a social-media star, but her lies threaten the one friendship she’s gained.

Bright Spots: The only good thing about this movie is actress Zoey Deutch, given her delivery and appeal. When it comes to unlikable female protagonists, Deutch’s acting ability was stellar in “Buffaloed,” also streaming on Hulu. An actor is only as good as the script, and there’s only one person to blame for what is to date, the worst film in 2022.

Weak Spots: “Not Okay” is written and directed by Quinn Shephard, who wrote a movie about influencer culture, while criticizing narcissism and nepotism. Yet, she cast her lesbian fiancée as a feature character in the film. This movie pretends to be a comedy and sometimes poses as satire, but it’s devoid of either laughter or enlightenment.

The film’s bait-and-switch premise is letting the audience think the story is about Danni, but it’s actually about a girl named Rowan (Mia Isaac), a character who, unlike her sister, survived a school shooting. What begins with a self-involved young woman finding ways to feed her ego, turns into a story about a black gun-control activist being taken advantage of by a privileged white woman.

Not only does the film abandon its premise halfway in, but it doesn’t supply an actual ending. The only lesson for our lead is to stop playing the victim — because she’s not. There is no opportunity for redemption or making amends in this story, only condemnation.

The Takeaway: “Not Okay” is the worst film of 2022 so far and a lock for the top five worst movies of the year. Even a film like “Beavis and Butt-Head Do the Universe” is better at poking fun at the faults of modern society. This film has too much hate and anger in its heart to accomplish either, making it a failure as a satirical comedy.

See or Skip: If you are just looking for something interesting to watch on Hulu, consider “No Exit” instead. Unlike “Not Okay,” it is a good movie.