As the story progressives, the film gets more ridiculous with every twist and turn.
By Jacob Smith August 15, 2022
Facebook
Twitter
Linkedin
Email 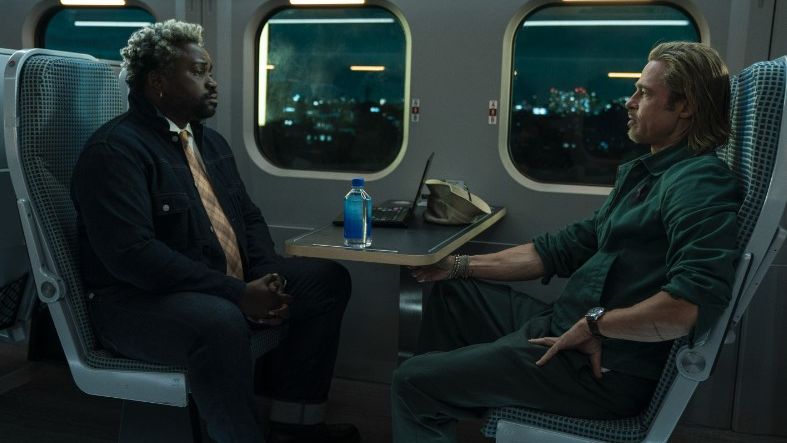 Sony Pictures “Bullet Train” is the latest  “John Wick”-style flick that pales in comparison to the franchise, which has run its course.

Sony has invested big money into promoting “Bullet Train,” especially since Brad Pitt is the lead. Casting Pitt in a movie directed by the original producer of John Wick seems like a slam dunk for a studio that needs a hit.

The question is: Can Pitt’s name still carry a franchise in the year 2022?

A movie like “Bullet Train” sounds good on paper — until you hire a screenwriter that doesn’t have a single feature film on his resume. The film reflects his inexperience. Yet, given Pitt’s marquee value, “Bullet Train” made $4.6 million at the box office in its Thursday, Aug. 4 preview screenings, at 3,595 locations. It opens wide on more than 4,300 screens starting Friday, Aug. 5, and Columbia Pictures forecasts a $30 million weekend haul against a $90 million budget, reports The Wrap.

The Story: Based on the Japanese novel “Maria Beetle by best-selling Japanese writer K&omacr;tar&omacr; Isaka, “Bullet Train” stars Pitt as an assassin with the code name “Ladybug.” Ladybug, suffering a string of bad luck, tries to summon some Zen into his life.  On the work front, Ladybug accepts an easy mission — grabbing a briefcase off a bullet train without firing a shot.

But, when Ladybug realizes he is not the only assassin competing for the briefcase, he is forced to outwit four other killers. What he doesn’t know: There is a decades-long rivalry playing out on the train, and he is a pawn in a much bigger game. With time running out, Ladybug has to escape the train before it reaches its final destination or else everyone will be in serious danger.

Bright Spots: Like most John Wick clones, “Bullet Train” offers a series of impressive visuals in a big-budget movie packing the majority of its story within a few train cars. The setup involves assassins who can only get off the train for one minute per station.

Numerous plot devices and traps are established with both short-term and long-term payoffs throughout the movie. The action is tight and intimate for the first two acts of the movie, while the story teases a bigger power play from minor characters. Pitt does most of his own stunts, and the acting is solid in terms of individual performances. It’s not the actors that fail this movie; it’s the storytelling.

Weak Spots: Screenwriter Zak Olkewicz has only worked on the Netflix film series “Fear Street” before being awarded a $90 million budget film. Olkewicz writes bland, flavorless characters. Worse, the story becomes a joke, due its need to be an “action comedy.”

“Bullet Train” comes off as someone trying to recreate a Guy Ritchie movie — and failing spectacularly. One of the biggest controversies about this film was deciding to “whitewash” characters who were written as Japanese.

Though a $90 million film is tough to market in the U.S. with lesser-known Japanese actors, the central problem isn’t whitewashing. It’s replacing the Japanese characters with those devoid of charisma.

Bryan Tyree Henry and Aaron Taylor-Johnson play brothers who everyone thinks are “twins” — one of the various running gags in the film. Johnson, who is British, sounds like he’s doing a terrible British accent, while Henry, who is not, struggles to maintain a British accent while driving a running joke about Thomas the Tank Engine straight into the ground.

Joey King is cast as a young assassin, dubbed “The Prince, who is more likely to manipulate than kill her victims.

The characters offer nothing in the way of entertainment, due largely to abysmal dialogue. We spend most of the film with Pitt’s character arguing on the phone with his handler in scenes meant to be funny, but aren’t. Multiple big-name actors are giving surprise cameos, but they are turned into either gay jokes or comedy puns.

As the story progressives, the film gets more ridiculous with every twist and turn. Characters, including our protagonist, become more unlikable, and when we get to the film’s third act, the story becomes a full-fledged Looney Tunes cartoon. Do not expect Brad Pitt’s yoga-instructor attitude to save “Bullet Train,” which crumbles under the weight of its own stupidity.

The Takeaway: “Bullet Train” is an action comedy that fails in both genres. The blending of different cinema cultures never feels organic, while the characters feel miscast. This is a film with all the potential, but none of the execution.

See or Skip: “Bullet Train” is a movie ripe with good ideas, but makes you question what could have been produced with an experienced screenwriter.