His grand prize home is a luxurious 4,200 square-foot property just a mile away from the picturesque village of Rock, in the U.K.
By Simona Kitanovska August 15, 2022
Facebook
Twitter
Linkedin
Email 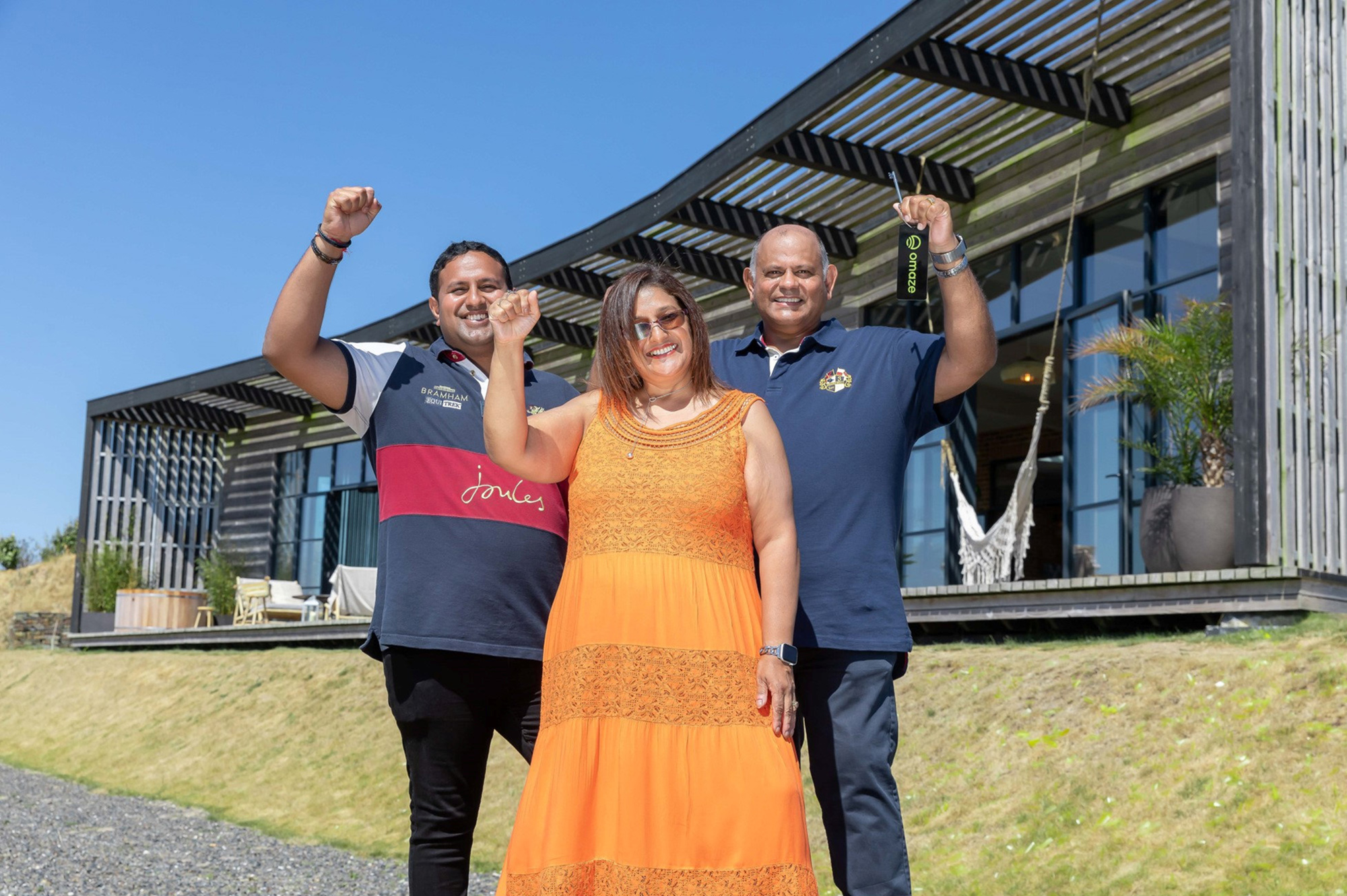 Uttam Parmar with wife Raki and son Aaron pose in an undated photograph. Uttam has scooped an award-winning $3.64 million four-bedroom house in the region of Cornwall, in the United Kingdom. (Omaze,SWNS/Zenger)

A dad has won a stunning home in a prize draw in England after previously only ever winning a coffee table – and says he won’t be taking it with him.

Uttam Parmar, 58, has scooped an award-winning $3.64 million four-bedroom house in the region of Cornwall, in the United Kingdom, with panoramic views of an estuary.

He has entered every previous Omaze Million Pound House Draw without success – but now says “patience really is a virtue.”

And Parmar says prior to this he has only ever won a coffee table and a TV – and won’t be needing them anymore.

He has also been given 50,000 British pounds ($60,670) in cash to help him settle in – plus the house comes mortgage free, with all sales tax and legal fees covered.

Parmar, who bought his winning entry in July for just 25 pounds ($30) – has been working as an operations manager at electronics manufacturer Alps Alpine for 18 years.

His wife of 32 years, Raki, 53, has worked as a member of staff for a regional police authority for 23 years.

The couple have lived in their current four-bedroom house close to Ashby-de-la-Zouch, Leicestershire, in England’s East Midlands region, since 2017.

When Omaze first contacted Parmar to tell him he’d scooped a prize – he was actually at the hospital – so rushed back to find out if he’d won the grand prize house.

Parmar said: “When Omaze called to tell us we’d won a prize, we were actually at the hospital.

”We were so excited that we might have won the grand prize, we called our son Aaron to see if the winning entry code matched ours – when he triple-checked the numbers matched, we must’ve burst his eardrums screaming down the phone!

”Although, we still didn’t believe we’d won until we got back to our house and Omaze told us in person.

“I’ve entered every Omaze Draw since they started, so patience really is a virtue, as I’ve now won my own piece of paradise – this house is definitely my favorite one they’ve offered!

“I’ve always considered myself a lucky person, firstly because of my wonderful family – but I’ve also won a few bits such as a TV and coffee table – which I was pretty happy with to be honest – I never dreamed I’d win anything as extravagant as a three-million-pound-house though!

“We’ve holidayed in Cornwall over the years and always thought it would be incredible to have a place here – and now we do – we’re still pinching ourselves.

“We have a large extended family – so no doubt they’ll all be asking to have their next birthday parties here!

“We’re not sure if we’ll rent, sell or live in it yet – it’s the best dilemma we’ve ever had! Whatever we decide, it’s a life-changing win for the whole family!”

The couple’s son Aaron, 26, lives in London, where he works as a senior manager at an insurance firm. They have a large extended family that lives across the United Kingdom.

Parmar is free to either live in the house, rent it out or sell it. If he does decide to rent it out he could achieve up to 15,000 pounds ($18,000) a month in vacation rentals during peak season.

His grand prize home is a luxurious 4,200 square-foot property just a mile away from the picturesque village of Rock, on the North Cornwall coast and was crowned Best New Build in Cornwall 2020.

As well as making Parmar and his wife multi-millionaires – the draw has also raised crucial funds for Blood Cancer U.K., a charity dedicated to funding research into blood cancer, which includes leukemia, lymphoma and myeloma.

James Oakes, Chief International Officer at Omaze said: “We’re delighted that Uttam has won his dream home – and was able to contribute to this fantastic 1,000,000 pound [$1.2 million] raise for Blood Cancer U.K. in the process.”