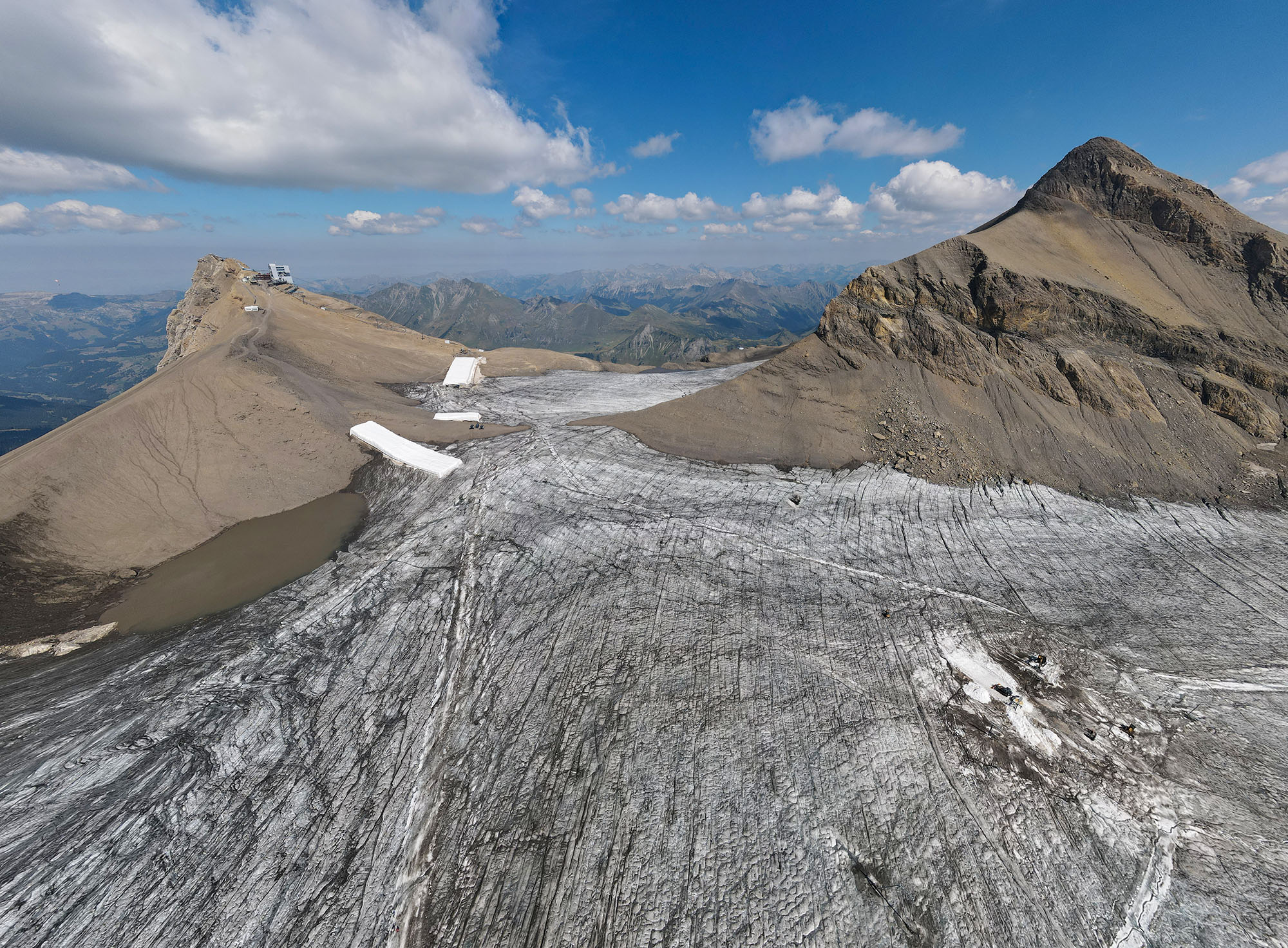 Photo shows the Tsanfleuron Pass in the Swiss Alps in an undated photo. It reappeared after being buried under ice for over 2000 years in August, 2022.  (Glacier 3000/Zenger)

A Swiss mountain pass buried under ice for more than 2,000 years has reappeared due to global warming.

The ice covering the pass between the mount of Scex Rouge and the Tsanfleuron glacier in the western Bernese Alps was 50 feet thick in 2012. Scex Rouge is itself covered with a glacier.

But the 9,180-foot-high pass is now reappearing and will be completely ice-free by September, say glaciologists.

Glacier 3000 – a company that operates several cable cars and ski lifts in western Switzerland – says the ice covering Scex Rouge and the Tsanfleuron glacier have lost three times as much thickness this year as the average for the past 10 summers.

In July, Switzerland’s national meteorological agency reported that the freezing-point mark had exceeded an altitude of 16,404 feet for only the second time ever.

Freezing level is normally below 16,404 feet. However, in the early hours of July 25, it was recorded at an elevation of 17,007 feet, said the Swiss Federal Office for Meteorology and Climatology.

Previously – almost 30 years ago – a record low of zero degrees Celsius [32 degrees Fahrenheit] had been reached at 16,984 feet.

A recent heatwave and lack of snow last winter are blamed.

In a statement obtained by Zenger News, Glacier 3000 said: “In the Glacier 3000 area, the pass separating the Scex Rouge and Tsanfleuron glaciers is now partially clear of the ice that had covered it for several thousand years. The two glaciers lost about three times the average amount in thickness this summer over the past 10 years.

“According to initial estimates, the Col de Tsanfleuron, a thin stretch of land between the cantons of Vaud and Valais at 2,800 meters [9,186 feet], has been covered with ice for at least 2,000 years, and probably even longer.

“However, according to glaciologist Mauro Fischer, a researcher at the University of Bern, it is not possible to say without further investigation whether the pass was really under the ice during the last interglacial period around 6,000 years ago (Holocene climatic optimum).

“In any case, the pass will be completely ice-free in a few weeks. While measurements in 2012 showed an ice thickness of around 15 meters [50 feet] at this point, the entire land will be fully visible (again) by the end of September.

“The summer of 2022, which followed a dry winter, was indeed disastrous for glaciers. According to Mauro Fischer, who is regularly on site, the loss of glacier thickness in the Les Diablerets region will be on average three times higher this year compared to the last 10 summers.

“In the near future, these changes will significantly affect the use of the glacier for snow sports. Originally, skiers could ski from the Tsanfleuron glacier to the chairlift at the bottom of the Scex Rouge glacier, which took them up to the cable car station of the same name. Now that the pass separates the two glaciers, considerations are being made as to how the existing infrastructure can be adapted.”

Bernhard Tschannen – director of cable cars at Glacier 3000 – said: “We are planning to renew the systems in this area over the next few years. One idea would be to move the route of the current chairlift to allow more direct access to the Tsanfleuron glacier.”

Bernhard Tschannen said: “No one has entered this place for more than 2,000 years, that is very moving!”

In the short term, several projects are underway to increase the energy autonomy of the infrastructure through the on-site production of renewable energies and the energy efficiency of the ski lifts.

By the way, experts believe that the operation of ski slopes has no negative impact on ice melt. On the contrary: the compacted snow melts more slowly and protects the glacier from the summer sun for longer. In addition, parts of the glacier are covered with tarps in the spring to protect the ice during the summer months.”